Even countries with long-standing nuclear aims are adding wind power much faster, as Brazil, China, and India show. Those interested in the fastest way to mitigate climate change can forget nuclear, says Craig Morris.

Solar plants like this one are cheap, fast to build, and making huge leaps in Brazil, China and India (Photo via Wikipedia, edited, CC BY-SA 2.0)

China has long had ambitions for nuclear power and it still does; under current plans, installed capacity will double by 2020. But even China has experienced delays in reactor construction. In contrast, it has repeatedly had to increase its targets both for wind and solar. What’s more, wind power has taken off like a rocket, clearly outstripping nuclear power generation. The solar target for 2020 implicitly more than doubled last month. Note in the chart below, we are comparing kilowatt-hours – the actual electricity generated – not kilowatts (installed capacity). 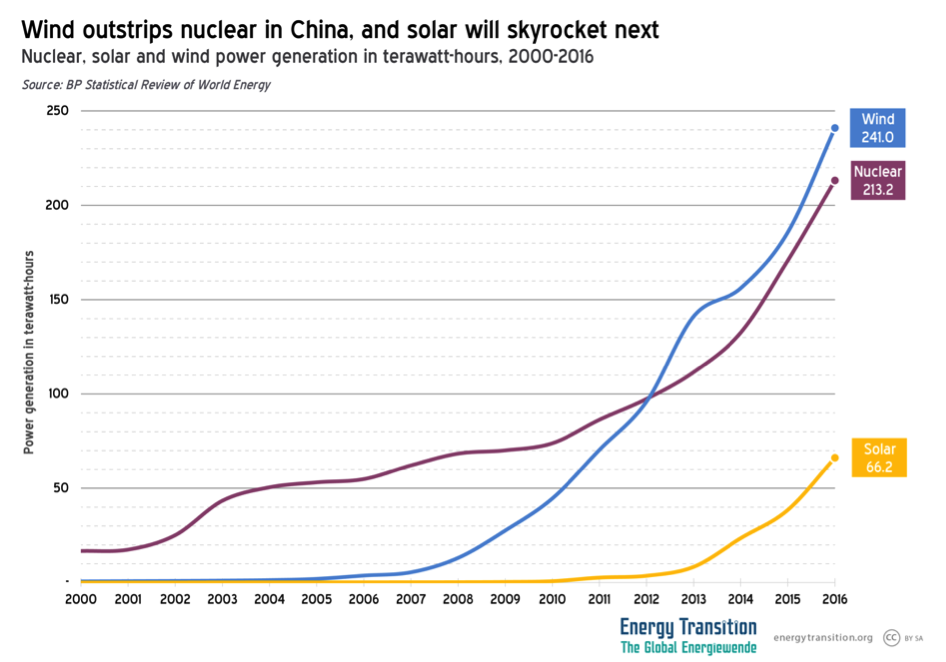 Things are no different in India. It now aims to increase nuclear capacity some threefold by 2024, but the country has also failed to meet previous targets for nuclear. The new target for 2024, for instance, is a third smaller than the one for (not from!) 1987. Both India and China have targets for rooftop solar that they are likely to miss, but India has otherwise managed to grow wind power impressively, with solar likely to come next. 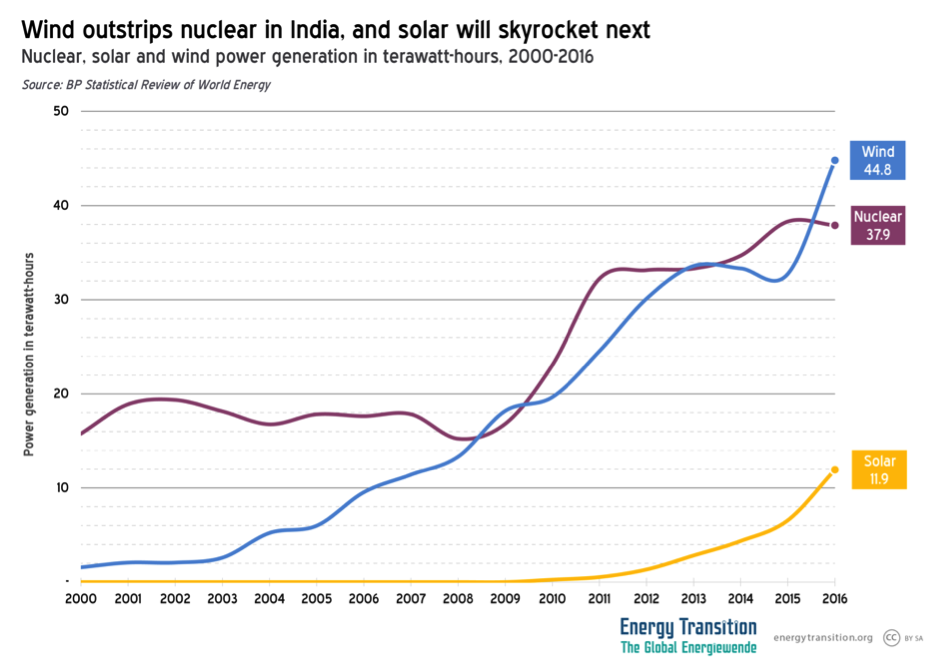 And then there is Brazil. The country initially had nuclear ambitions, which it has not completely abandoned. But since discovering wind power a few years ago, there seems to be little hope that nuclear will ever keep up. Brazil has yet to properly discover solar, but significant volumes have been tendered recently. Unfortunately, many of the winning bids were withdrawn due to the overall economic situation. But when power demand picks up again, Brazilians will not doubt see that solar and wind are the cheapest way to quickly add capacity. 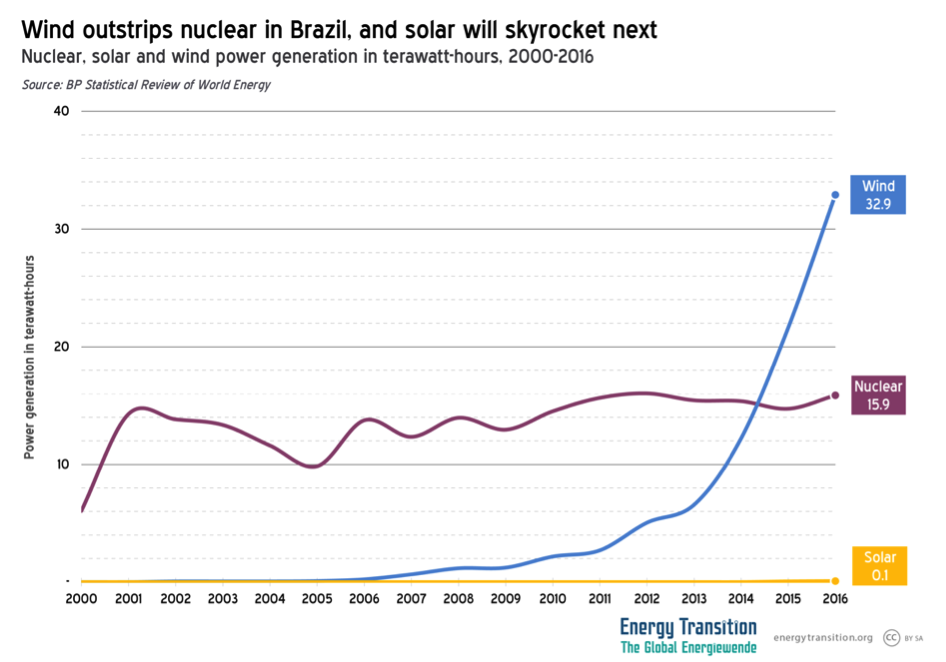 In studies proposing nuclear as a solution to mitigate climate change, one rarely finds an admission that massive new builds would be needed. By 2050, the reactors completed around 1980 (almost all of those in North America and Europe, for instance) would be roughly 70 years old. The average age of the French nuclear fleet will surpass 40 by 2025. The oldest technically still operating reactor in the world, Beznau 1 in Switzerland, is only 48 years old (commissioned on 1 September 1969), but it has been offline since March 2015, when microfissures were discovered in the containment vessel. In addition, indentions considered “not relevant for safety” were reported in August 2017; they had previously been discovered in the pressure chamber but not made public (in German).

If all the aging reactors online today worldwide were replaced by 2050, more than 400 would need to be added – around one per month from 2018-2050. And even then, nuclear only made up 2.3% of global final energy demand in 2015. If one reactor per week were added, the share could be quadrupled to around 10% if energy demand stagnated at the level of 2015. Reaching 70% would require a new reactor every day. How likely is any of that?

Critics of renewables often claim that wind and solar energy cannot grow quickly enough. There is no doubt that green energy is not currently growing fast enough to replace fossil fuels. One of the main findings in IRENA’s REmap 2030 report is that renewables are only growing in line with energy demand and are therefore unable to offset fossil fuel consumption significantly. What nuclear supporters fail to mention, however, is that nuclear is falling behind. Its share of final energy dropped from 2.6% in 2012 to 2.3% in 2015 according to REN21’s Global Status Report. 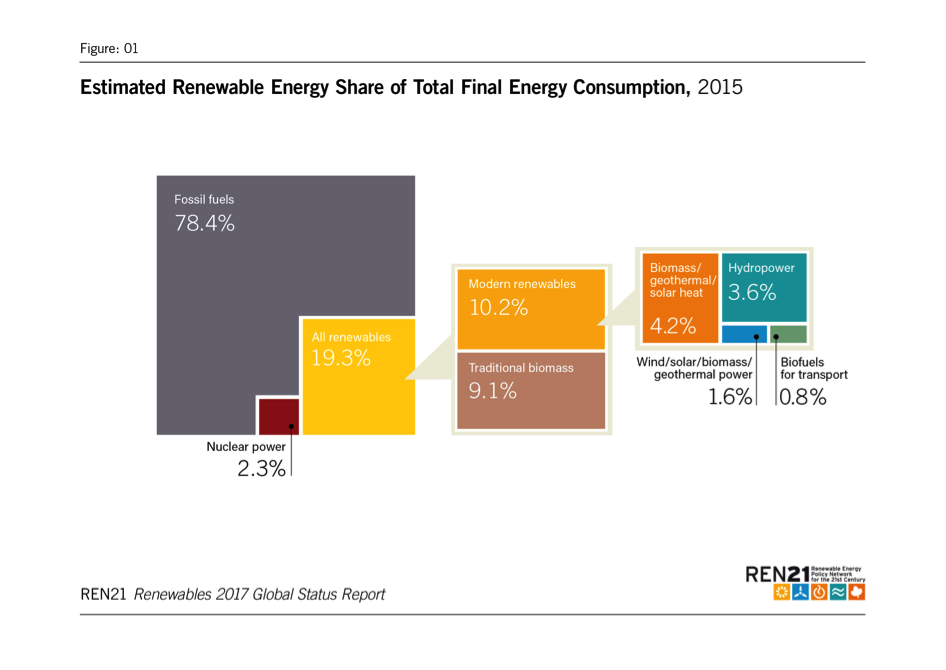 Next year, China could become the first country to put the EPR reactor design into operation after years of delay. The EPR (which is also to be used at the Hinkley site in the UK and elsewhere in Europe and the US) is to bring nuclear into its next era. But as we waited on the EPR to deliver, solar and wind have plummeted in price. Now, so much is being built that the question is no longer whether solar and wind can be cheaper than new nuclear, but whether nuclear can be cheaper than wind and solar plus storage.

For your convenience, the charts above are collected below. Feel free to share the image! 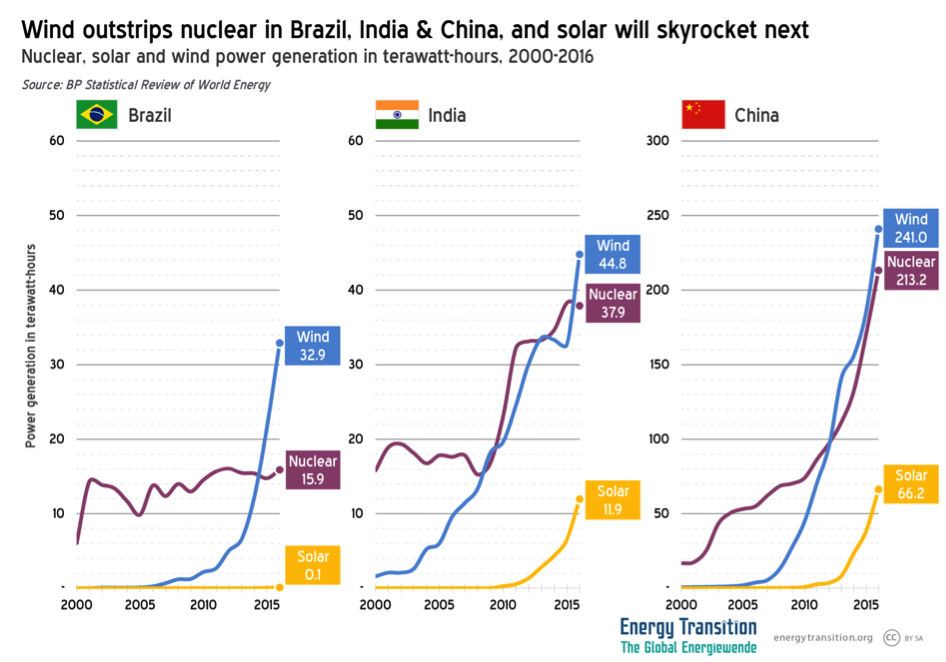