Since the 1950s, the Euratom Treaty has encouraged large investments into nuclear energy projects and funding for nuclear research. In all this time, the treaty was never revised to suit present-day demands. The trend towards cheaper renewable energy is ignored, while millions of euros that go towards nuclear research are legitimated. Cordula Büsch takes a look at why the Euratom treaty needs to be reformed, if not abolished.

Why not revise Euratom to suit present-day demands – like the fact that states are abandoning nuclear for cheaper renewables? (Photo by Felix König, edited, CC BY-SA 3.0)

The Euratom Treaty aims to establish nuclear safety regulations for workers and the general public and ensure the supply of nuclear fuels and related materials across the European Union. Most importantly, however, Euratom intends to facilitate investment into nuclear energy installations by disseminating technical information and ensure the funding of nuclear research. When the treaty was signed as part of the ‘Treaties of Rome’ in 1957, it certainly hit a nerve at that point, since energy independence seemed to be threatened by a shortage of conventional energy sources in the EEC founding states. The peaceful use of nuclear energy seemed like a viable way to achieve energy security and the cooperation among the member states facilitated investment for such costly projects.

Once a founding pillar of the European Communities, Euratom has lost this special status since the Lisbon Treaty. So far, the EU member states have not found a common ground to reform or even abolish this relict from the 1950s. Since its implementation, the wording of the treaty has changed very little despite reform efforts back in 2004, which proved unsuccessful. Lacking democratic legitimacy due to the absence of public consultations and the limited role for the European Parliament in the decision-making processes, it is long overdue to change the existing structures of the treaty which enjoys the status of a separate legal entity.

Additionally, Euratom continues to praise the high importance of nuclear energy for energy security and affordability. Based on the major objectives stipulated in the Euratom Treaty, millions of euros are invested into nuclear energy research every year, in spite of a wide-spread, booming trend towards renewable energy.

In 2016, the budgetary implementation of the Euratom Framework Programme (2014-2018) – which invests into Euratom’s research and innovation programmes, fusion energy research as well as nuclear fission and radiation protection – amounted to approximately EUR 233.6 million. PINC, the Nuclear Illustrative Programme, is connected to Euratom and serves as a strategic document for estimating financial needs regarding nuclear power plants. The regularly commissioned paper continuously overestimates the relevance of nuclear power in future energy scenarios and envisions large replacements of the current nuclear power station fleet, while the immense costs are disregarded in the face of increasingly cheaper renewable alternatives.

The recent PINC 2016 estimated a total of EUR 650-760 billion investment requirement in the nuclear fuel cycle between 2015 and 2050. The programme assumes that there should be a replacement of the existing nuclear power capacity upon closure of old nuclear power plants. This is unrealistic considering the recent financial disasters such as Flamanville that have been ignored, as well as the trend of fewer operating plants and even fewer new constructions.

It is, thus, not surprising that the subsidies granted for the controversial Hinkley Point C project in England have found a base for legitimacy in Euratom. The much contested state aid worth several billion pounds was approved by the European Commission in 2014 and has paved the way for the final investment decision from the French firm EDF. The British government agreed to the construction of the first nuclear power plant in 20 years in the UK and signed final contracts with EDF in September last year.

In the light of the declining costs of renewable energy and the ever increasing costs of nuclear, Hinkley Point C is not attractive from a consumer-perspective. 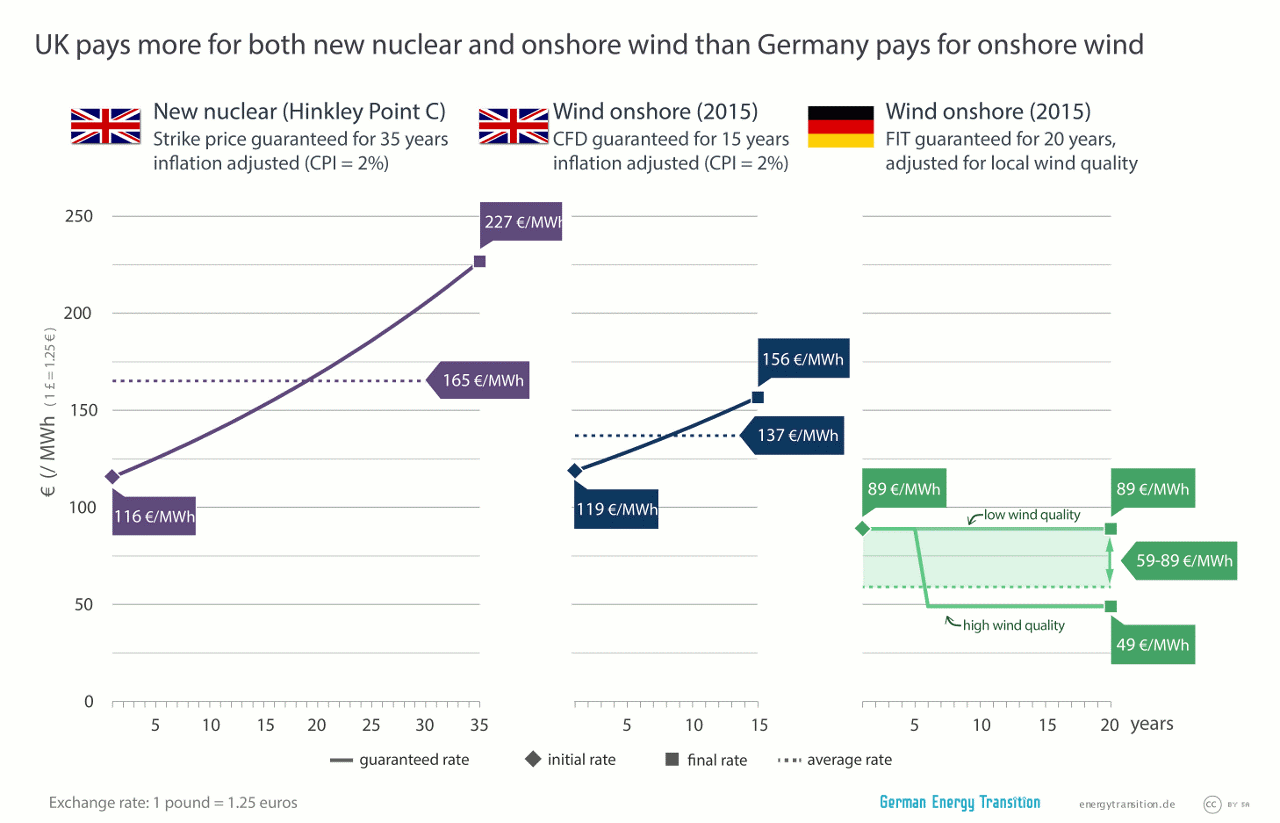 Still, the parties involved advertise the project as a step towards meeting clean energy targets, as a job creator for 25,000 people and a tool to attract investment for the UK, especially since the Chinese government will take a one-third share of the costs. As the Brexit process has been going forward, the project might even been seen as ‘a tool to take back control’.

The Brexit, furthermore, creates a new situation for the European Union and Euratom alike, as it will be the first time that a country would leave the Treaty rather than joining it. The British Prime Minister Theresa May has explicitly mentioned in her letter to the EU Council which officially triggered article 50 in March that the UK will leave the Euratom treaty, despite Euratom membership not being connected to EU membership.

Perhaps this can be taken as an opportunity, a wake-up call, to finally discuss the dissolving of Euratom altogether. Just like the Brexit negotiations, this will bear many challenges and open questions, such as the future of the long-term ITER project to build a fusion reactor. In 2012-2013 Euratom funded the ITER project with the substantial amount of EUR 2.2 billion. Nonetheless, it should be a necessity to discuss the future of Euratom, especially now at a time when demands to reform the EU are voiced by the remaining 27 members.

Still, as there are no dedicated contributions towards Euratom from each nuclear power state, every country indirectly contributes to nuclear research through the general EU budget. This is not in the interest of countries such as Austria and Germany, where opinions against Euratom and nuclear energy have been publicly raised in several protests.

Keeping up the status quo will leave the EU vulnerable to even more allegations targeted towards its “undemocratic” character. It would make sense to incorporate the provisions for Euratom into the Lisbon Treaty as well as clarify the relationship between Euratom and the EU institutions and in order to close the democratic gaps. At the same time, a common approach towards nuclear research and energy, ideally envisioning a large-scale nuclear phase-out, should be sought after.

Cordula Büsch has carried out extensive research on Euratom and is currently completing her MA degree in Political Science/ Area Studies at the University of Rostock.