Although mini electrical grids aren’t widely used in Southern Africa, a pilot project outside Cape Town is testing if these can be a financially sustainable off-grid way to address energy poverty here, writes Leonie Joubert. 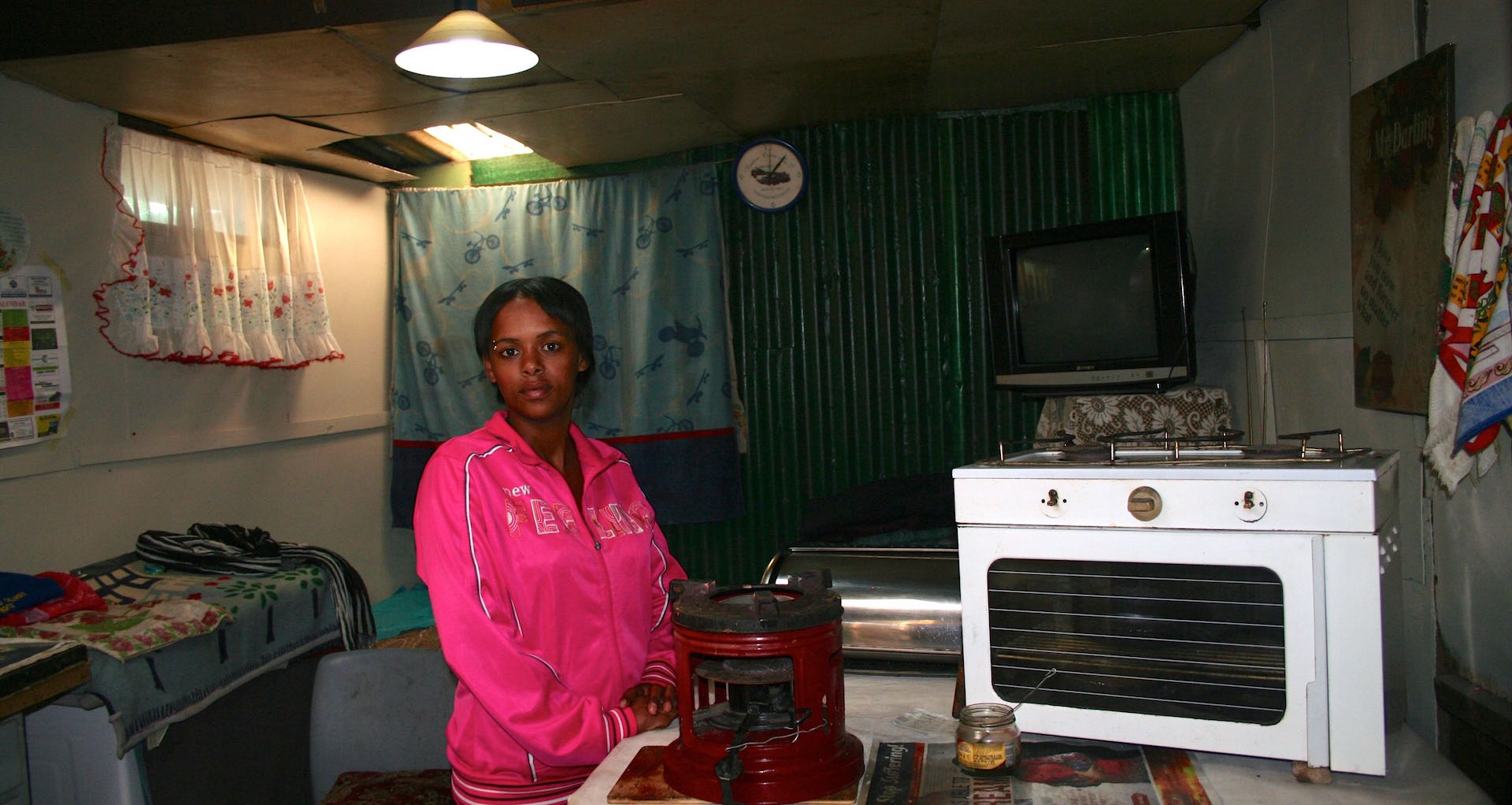 Even by mid-morning, the sun hasn’t made much headway in Megan Zaal’s lounge. It’s a typical autumn day in Cape Town – overcast and cold – and like many homes in the informal settlements around South Africa, there aren’t many windows to let in light or warmth.

The 26-year-old, who is on maternity leave from her catering job at a suburban hospital, is breastfeeding her infant daughter while she thinks about which aspect of the new solar PV-powered mini-grid she benefits from most since her family’s home was connected to the system that feeds basic energy though to a network of nine interconnected houses. She gets basic lighting inside and out; they can charge cellphones, and run a radio; and it powers a television set.

‘Oh, the lighting,’ she says, ‘when it’s cold, with the lights on we can see, and it even feels warmer.’

Instead of groping for matches and candles during the night when she needs to get up to feed her six-month-old, she flicks a switch, et voila!

Once her baby is satiated, she gives a tour of the family’s energy mix, a patchwork of sources so typical of this community which lives close to the breadline, and has yet to be connected to the national grid. 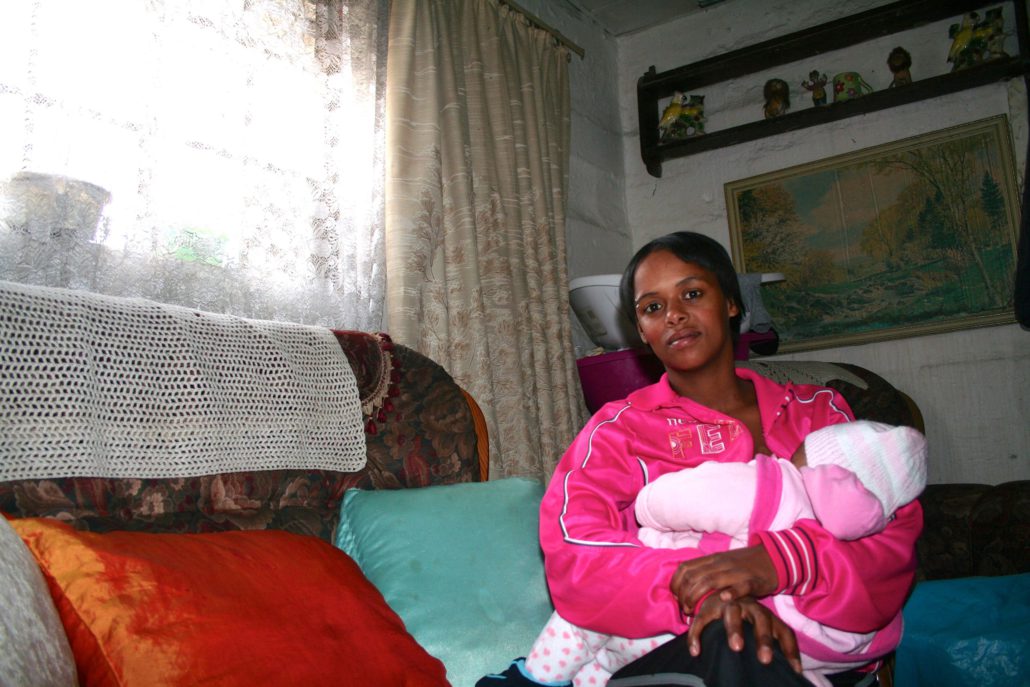 For Megan Zaal, the best thing about the mini-grid is that, with the flick of a switch, she has light at night by which to feed her infant daughter.

There’s the old petrol generator that takes up a chunk of floor space in the lounge, and which her grandfather Kenneth Halford hauls outside when they need to fire it up, usually between 6pm and 10pm. It goes outside when it operates, because of the exhaust fumes; then comes back inside to keep it safe from theft. But they don’t use it much anymore, now that they’re on the mini-grid.

In the kitchen, she points out the paraffin Primus stove. Few in the community like these, mostly because they reek, they’re dangerous, and the fumes they produce are a health hazard. There’s also a two-plate countertop stove that runs off gas. But they don’t use this much anymore, either. Too risky.

‘My grandpa doesn’t want to use gas,’ she explains. ‘He’s scared because of the children. If someone forgets to close the gas, and you light the paraffin stove, then maybe it’s going to explode.’

There’s a gas-operated chest freezer which they use in summer, when it’s hot. There’s no sign of candles or paraffin lamps because the PV system means they don’t need this inefficient and risky form of lighting anymore. Cooking, heating, and lighting with open flame is one of the greatest sources of house fires in these communities. 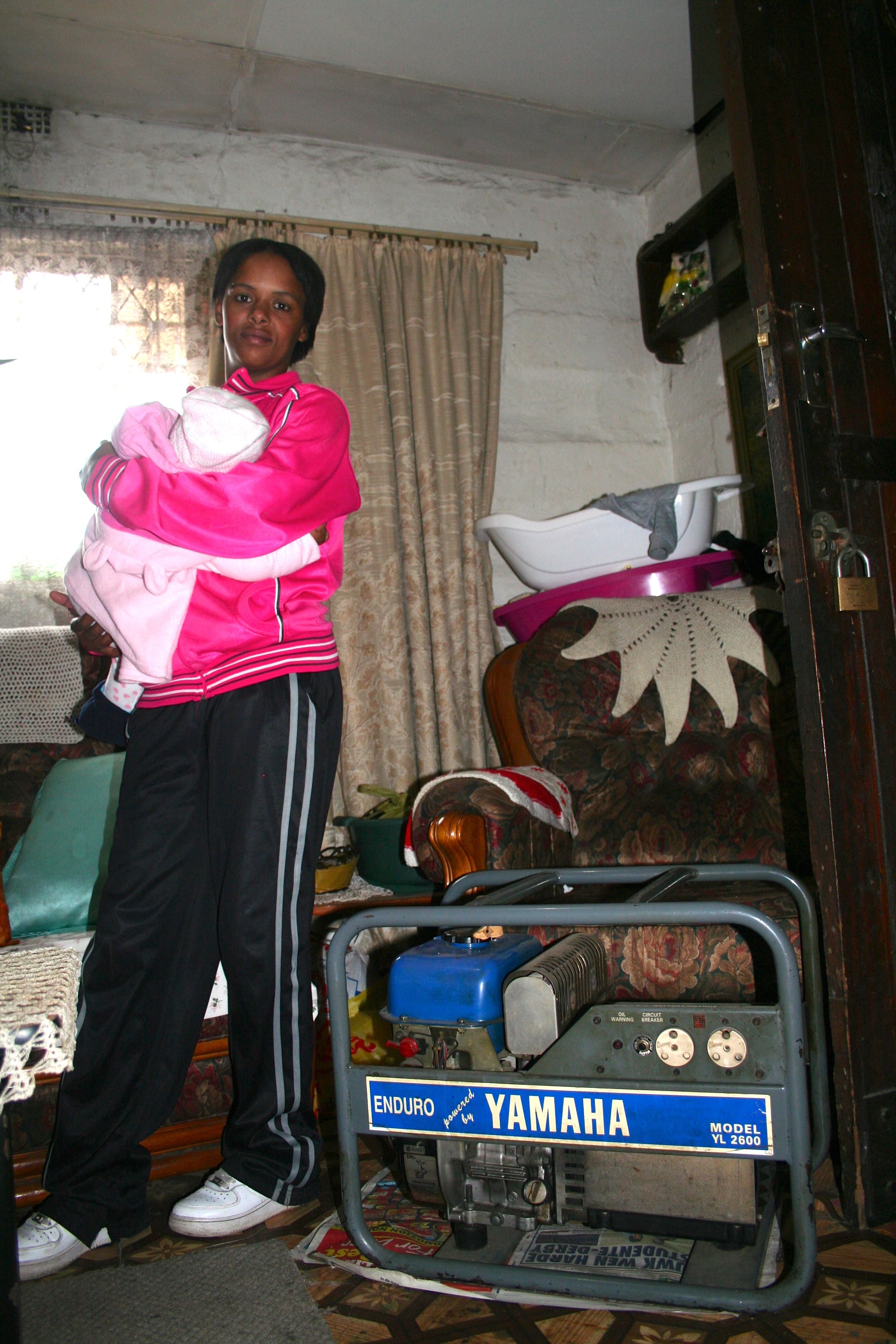 Petrol power: Megan Zaal and her family seldom use the expensive petrol generator to light the house at night anymore. It costs about R20 per hour to run.

The Zaal-Halford family lives in Jabula, an informal settlement in Philippi, a part of Cape Town where the state relocated people of colour during the forced removals under apartheid. They’ve remained economically marginal ever since, struggling to find minimum wage jobs and mostly surviving on social grants.

They’re still waiting for the municipality to connect them to the national grid, but because they’re on private land, there’s a delay in the state meeting its objective of ‘universal electrification’. So they take care of their energy needs themselves, hence the mix of gas, paraffin, candles, and the petrol generator.

But in 2016 they agreed to work with local energy entrepreneur, Zonke Energy, to test a pre-paid mini-grid electricity system.

There aren’t many examples of mini-grids in South Africa. This is partly because of the country’s universal electrification policy, which aimed to get power into all homes by 2012, through grid or non-grid supply, explains Damian Conway with the Sustainability Institute Innovation Lab (SIIL) outside Stellenbosch in the Western Cape.

For those who can’t connect to the grid, non-grid options usually involve solutions that are geared towards individual homes’ needs.

‘This could be single appliance solutions, such as individual solar lights or cellphone chargers. Or it could involve a system where a small PV panel and battery run basic appliances in a single home, such as lights and a TV,’ he says.

A mini-grid is a step between the national grid-scale solution, and the single solar home solution: it’s an off-grid, electricity generation system that links and supplies anything from 10 to 150 neighbouring households. In the African context, it’s usually used in rural communities that are too far from national infrastructure to be connected to the electricity supply network. In South Africa, it’s regarded as a stop-gap until the state links a community to the grid, and therefore hasn’t been used much.

A mini-grid needs fairly costly infrastructure – an energy source such as PV panels or a wind turbine, batteries, and a distribution and metering system – as well as technically competent maintenance and operating systems, says Conway.

It is generally only viable in a high-density community. The longer the distance between the power source and the user, the greater the energy loss along the cables, which calls for a higher voltage system (this means more heavy-duty hardware and higher technicians’ skill levels).

Zonke Energy’s Hendrik Schloemann scouted about Cape Town to find a community in which to pilot a fledgling mini-grid idea, to test both the technology as well as the financial model. 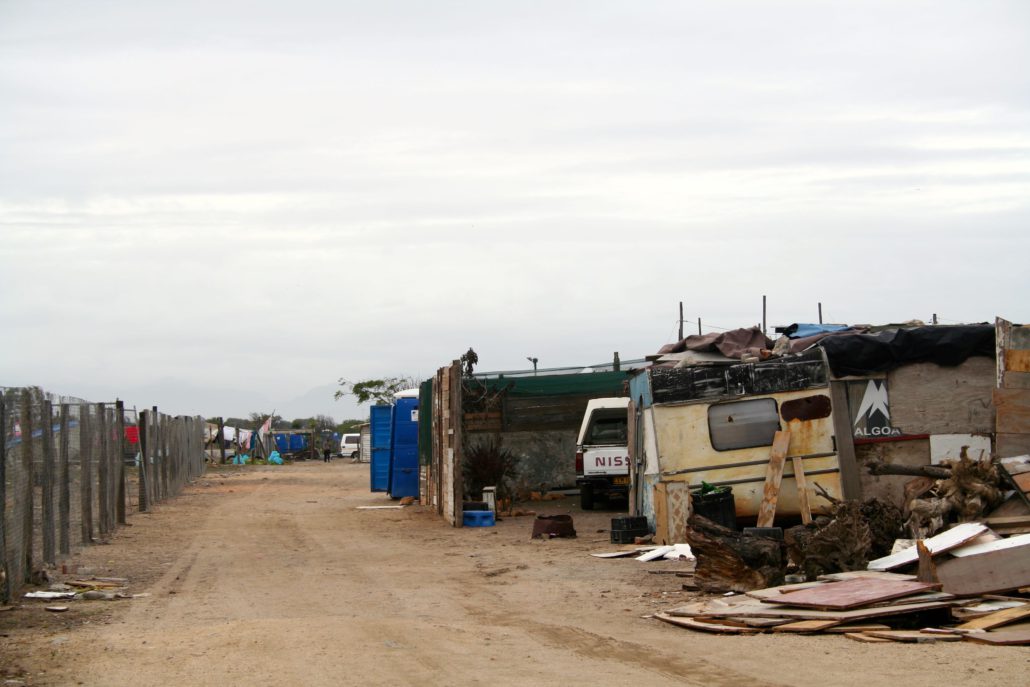 Homeward bound: Jabula is an informal settlement on private land in a part of Cape Town where the state relocated people of colour during the forced removals programme under the apartheid regime.

‘There are 54 families living here,’ explains Schloemann. ‘It is a stable community, which has been here for over 30 years. The landowner is happy for the project to be piloted here.’

There’s at least one employed person per household, so the community’s income is slightly higher than the average in the city’s informal settlements.

The Jabula system became fully operational in September 2016 and serves about 36 people in nine networked households, relying on a 1000 watt solar PV system. Kenneth Halford gets a discounted rate for having the hub in his home: the PV panels mounted above the roof on a sturdy metal frame; batteries and DC board inside the house; an internet connection to allow Zonke Energy to manage the energy supply remotely on a moment-by-moment basis. Wiring connects all additional houses to this centralised system, supplying 12 volts of electricity.

The entire system cost about R100 000 to install, with Zonke Energy covering the cost of the capital investment, and owning and operating the infrastructure. The company functions as a service provider, and has a rental agreement with the users.

The financial model works like pre-paid mobile phone airtime, where a family can choose one of two options: R220 per month gets six lights, two phone charging connections, and a radio; R370 also gets a television and DVD player.

‘How do we create a financially sustainable solution to energy poverty in Africa?’ asks Zonke Energy’s Hendrik Schloemann.

In 2016, a few households in the Jabula informal settlement agreed to work with energy entrepreneur Zonke Energy to pilot a privately owned and run mini-grid system, with 1 000 watts of PV-supplied electricity feeding a network of nine interconnected houses.

Schloemann describes it as a low-profit, private-sector social enterprise initiative that allows for partnerships with other organisations, or the state, who have their own development agendas.

One way to help fund this, could be to tap into the state’s free basic electricity policy: the Department of Energy has mandated that qualifying indigent households get 50 kilowatt hours (kWh) of free electricity each month, enough for lighting, cooking, and accessing media.

It’s easy to roll this out to grid-connected homes, but not so easy to support non-grid homes. An off-grid development project run by Conway’s SIIL in a low-income community outside Stellenbosch, gives renewable off-grid electricity to individual households and has managed after some years of negotiations with the Stellenbosch municipality to get the scheme subsided by the municipality through this free basic electricity policy. Here, the subsidy is equal to the nominal rand equivalent of 50kWh and is paid towards the running costs of each household served in the scheme. Schloemann thinks this might be worth pursuing in Jabula, too.

Although, as Conway points out, the current rand value of that free electricity ‘comes nowhere near to the true cost’ of providing 50kWh of off-grid electricity to an indigent household.

This means the community doesn’t have to shoulder the high start-up costs. But it is risky for the developer, and why Schloemann wants to boost capital injection, either through state subsidies, private sector investment, or partnering with NGOs.

A system like this does need community buy-in, in order to avoid things like cable theft, tampering, or vandalism. What Schloemann has learned, he says, is that those who have the system in their homes are happy; those who are still waiting for the mini-grid to be widened to include more homes, are frustrated by the slowness of delivery (Zonke Energy needs to raise the capital before it can extend the network); and some are worried that by having this system in place, the municipality won’t prioritise them for grid connection.

Two doors down from Megan’s home, is pensioner Christine Jacobs. The 71-year-old has signed up for the R220-per-month package. Like Megan, she needs the lighting more than anything.

‘My eyes don’t see so well at night anymore,’ the retired cleaner smiles.

She’s never had a generator – for many in Jabula, this option is too dear – but her lighting costs have dropped since she joined the mini-grid. 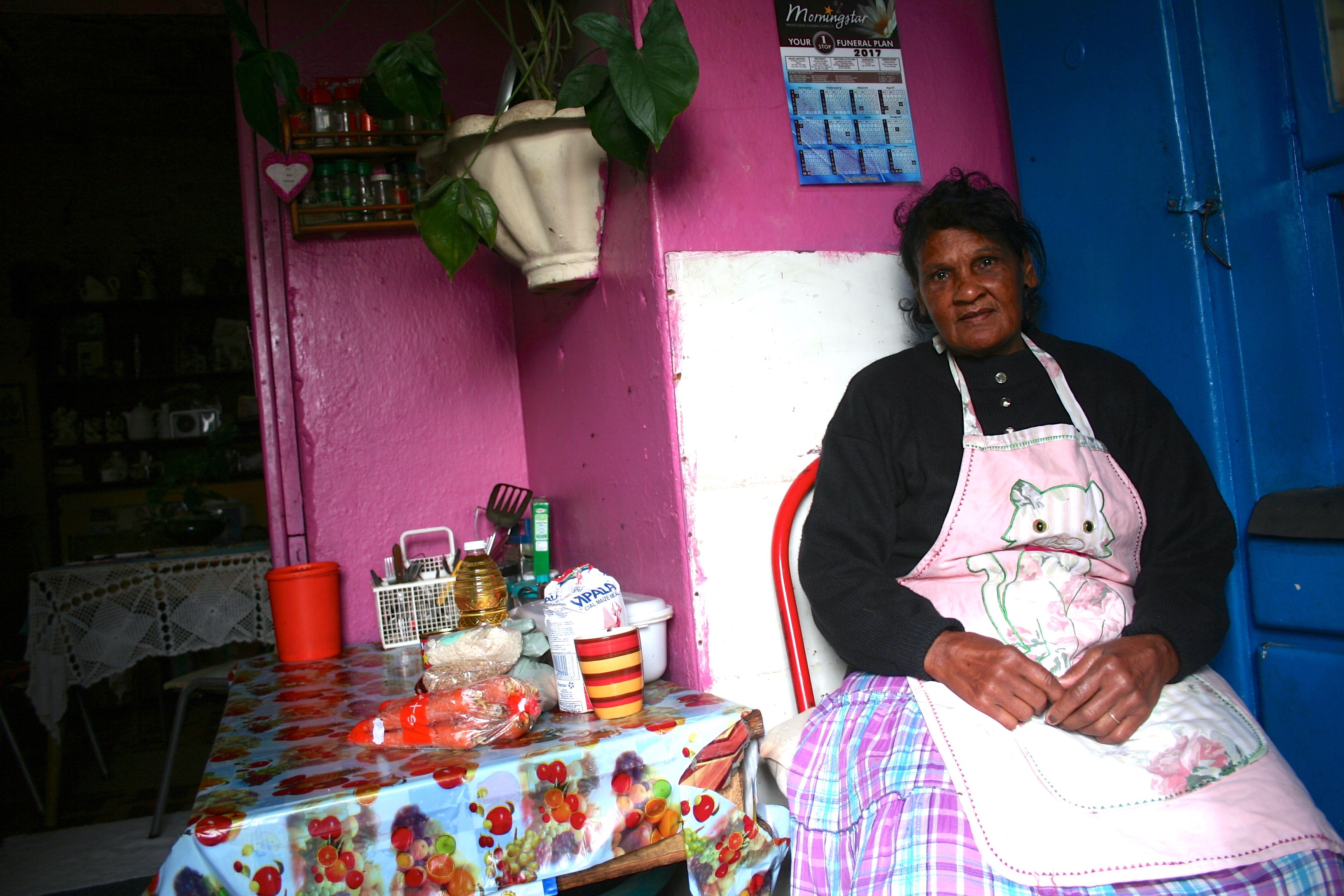 In the dark: Pensioner Christine Jacobs can’t see well at night anymore, which is why she needs good overhead lighting.

Once a week, Christine walks to Shelly’s Tuckshop, about 300 meters away, and tops up her electricity. This is Zonke Energy’s vendor, where each of the nine clients do their energy shopping either weekly or monthly, depending on their cash flow. The shop owner then goes onto a web page using a computer tablet, and punches the details into an interface which immediately communicates to the hub of the system, releasing power to the client for the period of time they’ve just paid for. 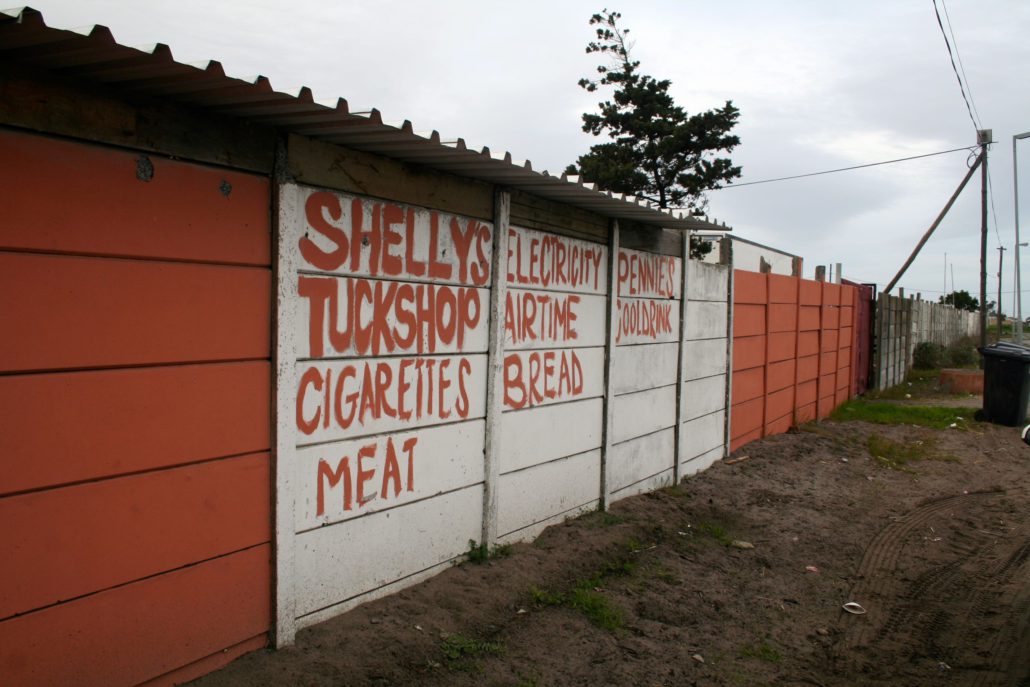 Cash sales: Shelly’s Tuckshop, a small general dealer in the neighbourhood, has signed up to be Zonke Energy’s vendor, selling the pre-paid electricity to the nine clients on the network on a weekly or monthly basis.

Megan is starting out her life as a young mother. Christine is in her sunset years, living with her daughters and their children.

Both say that the mini-grid has made their lives easier, they’ve cut their energy costs, and they don’t have to live with the anxiety of dangerous forms of power.

This piece was originally published on African Climate Reality Project.