The UK government has attempted to sabotage the European Union’s climate goals – even though they won’t be affected after Brexit. So why would they target EU energy policy? Zachary Davies Boren of Energydesk investigates.

On the very day Theresa May triggered Article 50, her government quietly issued another bold statement to Brussels.

Key renewable energy and energy efficiency targets proposed by the European Commission should be reduced, made non-binding, or even scrapped altogether, the UK said, despite the fact that they would not take effect until after the UK had left the EU.

“The UK is pissing off countries it needs as allies.”

The news comes as the future of the Paris climate agreement hangs in the balance, with the United States refusing to commit to the deal at the G7 meeting.

“This leak shows Donald Trump has a mole in the EU, and she is called Theresa May,” Shadow Climate Change Minister Barry Gardiner said.

“It is calculated dishonesty to publicly embrace the Paris agreement whilst trying to block the very steps needed to implement it.”

The move also suggests a Conservative government alter European climate and environment rules once they are transposed into British law via the much-touted Great Repeal Bill.

Caroline Lucas, leader of the Green Party, said this is “a strong indication that, unless we fight back, Britain could become an offshore pollution haven where the environment is in the firing line of an aggressive Government with a blind and brutal deregulation agenda.”

A spokesperson for the Department of Business, Energy and Industrial Strategy said: “Any future decisions on energy efficiency policy would be a matter for the next government.”

The Conservative Party failed to comment for this story, however the party has stated that it is committed to retaining the UK’s carbon reduction targets and its support for the Paris climate agreement.

One of the laws the UK is lobbying to weaken is the revised Energy Efficiency Directive, a key component of the EU’s plan to tackle climate change by reducing consumption of fossil fuels.

The European Commission’s proposal would set a binding target of 30% increased energy efficiency by 2030 (compared to the ‘business as usual’ scenario), but the UK would like to see that ambition considerably scaled back, recommending it be reduced to 27% and made non-binding.

Every 1% improvement in energy efficiency means saving the (equivalent of the) annual CO2 emissions of 12 million cars, and averting thousands of premature deaths caused by air pollution, according to data compiled by Friends of the Earth.

The British delegation – which is formally part of the Department for Exiting the European Union – is also pushing to gut the proposed Directive’s key clause, that would require energy companies to to achieve annual energy savings of 1.5% post-2020.

“The UK does not believe Article 7 should be rolled forward beyond 2020 but if it is to continue targets should be indicative not binding,” the document reads.

Jan Rosenow, Senior Associate at the Regulatory Assistance Project, said: “Efforts by the UK to water down the EU’s energy efficiency mandate is not only concerning, but wholly inappropriate given that the targets apply to the period after 2020 at which point the UK will have left the EU.”

This, he suggested, is in keeping with the UK’s approach to energy efficiency, which “has been in reverse gear since 2012.”

“Unfortunately the UK’s position on EU energy efficiency targets does not instil hope for a change in direction after Brexit,” he added.

Energy ministers are reportedly divided on how ambitious the target should be, but an agreement on a common position is expected to be taken when they meet on June 26.

Read the UK’s comments on the Energy Efficiency Directive

The other proposed regulations the UK is trying to water down concern the governance of Europe’s internal energy market.

The UK’s comments – delivered the day before Article 50 was triggered – were similarly in favour of less oversight and weaker targets. 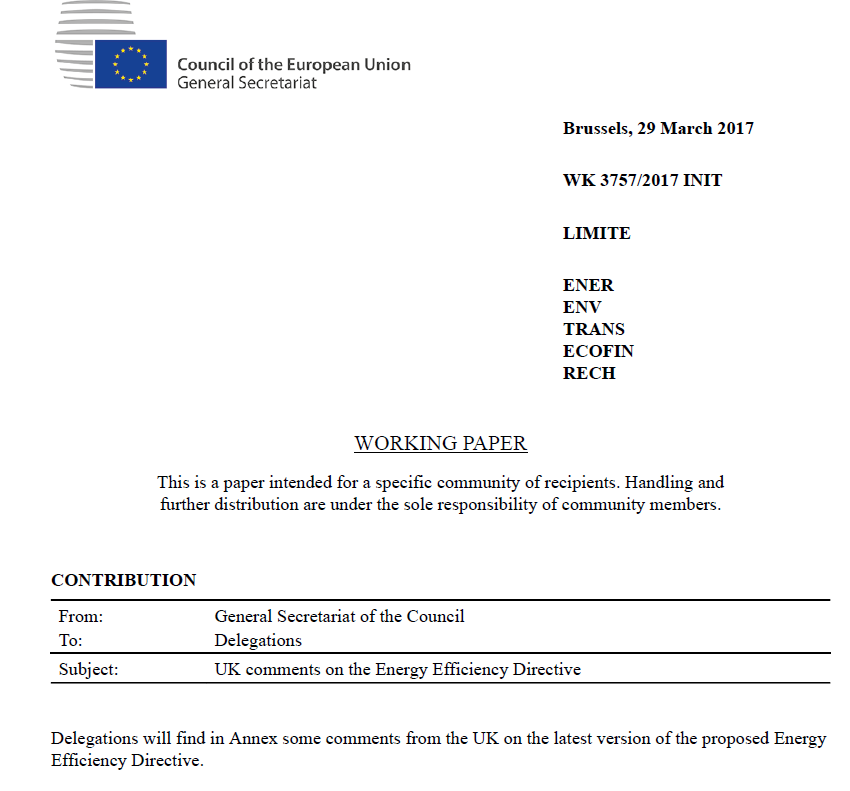 Most significantly, the UK takes issue with the clause calling for ‘linear progress’ on renewable energy in the lead up to the EU’s 2030 target, which is still being negotiated.

“We do not consider that linear progress to the target should not be expected or determined at the EU and, rather, that it should be for MS (member states) to determine based on their plans,” the

Member states would therefore not be required to steadily scale up their share of renewable energy — meaning they could simply could delay action until just before the target is due, and so burn more fossil fuels in the meantime.

The UK government’s feedback also repeatedly called for language – such as “if applicable“ – that would water down the strength of the agreement.

And it went even further, rejecting a call for “national objectives for total (public and private) spending in research and innovation” because the UK does not collect total figures on private sector activity.

This article was originally published at Energydesk.

Zachary Davies Boren is a reporter with Greenpeace’s Energydesk, and also writes for The Independent. On Twitter: @zdboren