Household battery storage units connected to solar roofs are about to take off in Germany, according to sector experts. But if storage + solar makes sense, so does storage on its own. Craig Morris explains.

In June, German solar association BSW-Solar announced some impressive numbers (press release in German). The cost of solar storage units had fallen by a third in the previous two years. A third of all new arrays in Germany are installed with storage from the outset. Germany now has some 40,000 PV arrays with battery units attached. And the organization recently added that the number should reach 100,000 by 2018.

One reason for the fast growth may be the way the bonus tapers off. Starting in the first half of this year, state funding was provided for 25 percent of the purchase price, but that level drops by 3 percentage points every six months, reaching 10 percent by the second half of 2018, when the policy will expire if not extended. It’s a little more complicated than that: a maximum of 500 euros per kilowatt for a new PV array up to 2,000 euros, slightly different levels for storage added to existing arrays, etc. (practice your German with this PDF if you need specifics). But the incentive to build now is clear. Note that the maximum size for eligibility is thus 4 kilowatts of PV, or around three dozen panels.

Lots of new reports claim that Germany is switching entirely from feed-in tariffs to auctions, but in reality FITs are still available for PV arrays up to 750 kW in output, which is three times the size of the array on all of the roofs below. 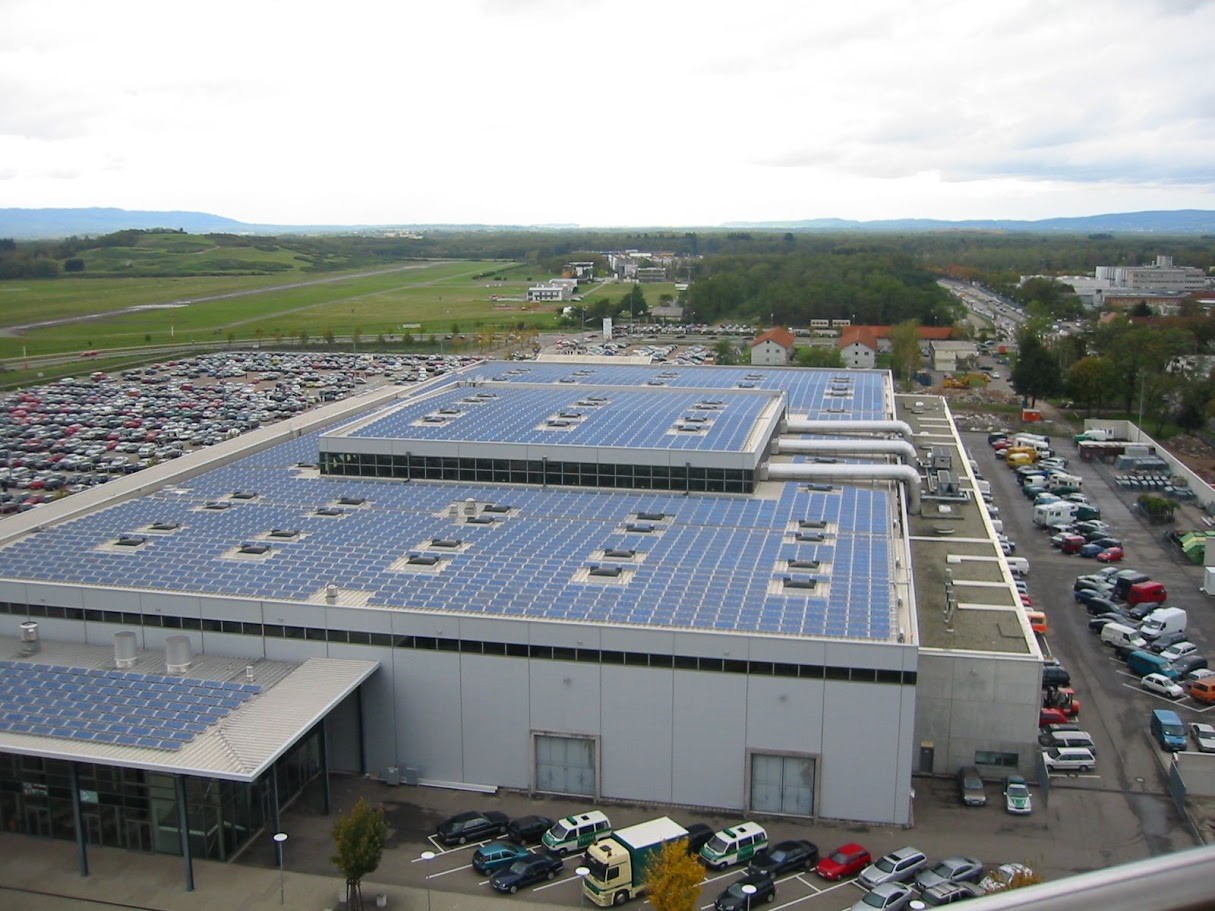 The Trade Show grounds in Freiburg, with a 225 kW PV array (Photo by Craig Morris)

FITs thus remain the primary policy tool for building-integrated PV. On the other hand, the FITs currently offered are generally considered too low at around 10 cents. People nonetheless build PV because the retail rate is closer to 25 cents per kilowatt-hour (or 30 cents if the monthly connection fee is included). In other words, for each kilowatt-hour of solar you consume yourself, you save up to 20 cents, twice as much as you get from the FIT for sales to the grid. (Note: I warned that such overpayments were coming way back in 2010; grid parity is bad news for the grid and consumers that cannot go solar.)

The problem is that without storage, direct consumption of solar power is hard. Think about it: a PV arrays produces almost all of its electricity merely six hours a day, from 9 am to 3 pm, when people are generally not home. Without storage, solar power consumption and production have to happen simultaneously. For businesses, those are opening hours, so storage is not so crucial; the power can mostly be consumed directly. But even if homeowners set appliances (like washing machines) to run at midday, it’s hard for them to go above 30% direct solar power consumption without storage. With it, you can consume up to 60% of your solar power directly. As the need for upfront bonuses shows, we have not reached “storage parity” yet—the point where stored solar power is cheaper than power from the grid. Once that point is reached, no state funding will be needed; everyone who can go solar will add storage as well—and those who cannot go solar will be detrimentally affected (it’s called grid defection).

Instead of storing solar power alone, we need to store grid electricity, which is still largely nuclear and coal in Germany—and grid operators should control distributed storage units. Follow those links for the reasoning. Suffice it here to say that big batteries at grid nodes are cheaper, and hence better, than a bunch of small units.

So why do tiny storage units for no more than three dozen panels receive state funding if they make so little sense, as I claim? It’s about first movers. By 2050, we will need lots of storage. The funding thus incentivizes innovation need for the future. Since businesses don’t need much storage (see above), households are the main driver for now.

But if distributed storage makes sense, then it should on its own—without PV. Households should be able to install their own wall units, provide grid support, possibly in a swarm, in return for compensation. In addition, these homes would have fantastic emergency power supply whenever the power goes out (which, admittedly, almost never happens in Germany).

At present, no bonuses are available in Germany for storage alone. In fact, there aren’t even proper price signals, though the first projects are underway (in German). Maybe it’s time to start thinking about storage alone. You don’t need your own roof, and the roof doesn’t have to be unshaded or properly oriented. All you need is wall space, and you can help facilitate the energy transition!