In the first half of 2016, 36.4 percent of the electricity produced in Germany was renewable according to preliminary data. The target for 2020 is only 35 percent – and that figure does not include power exports.  Renewables seem to be cutting into both coal power and nuclear; gas is up. Craig Morris explains.

German wind turbines; renewables may be on track to achieve its renewable energy targets (Photo by Tony Webster, modified, CC BY 2.0)

Preliminary data from Fraunhofer’s Energy Charts project indicates that Germany will probably surpass its 2020 target for renewable electricity. Indeed, the country seems to be approaching the lower end of the target corridor of 40-45 percent renewable power by 2025. 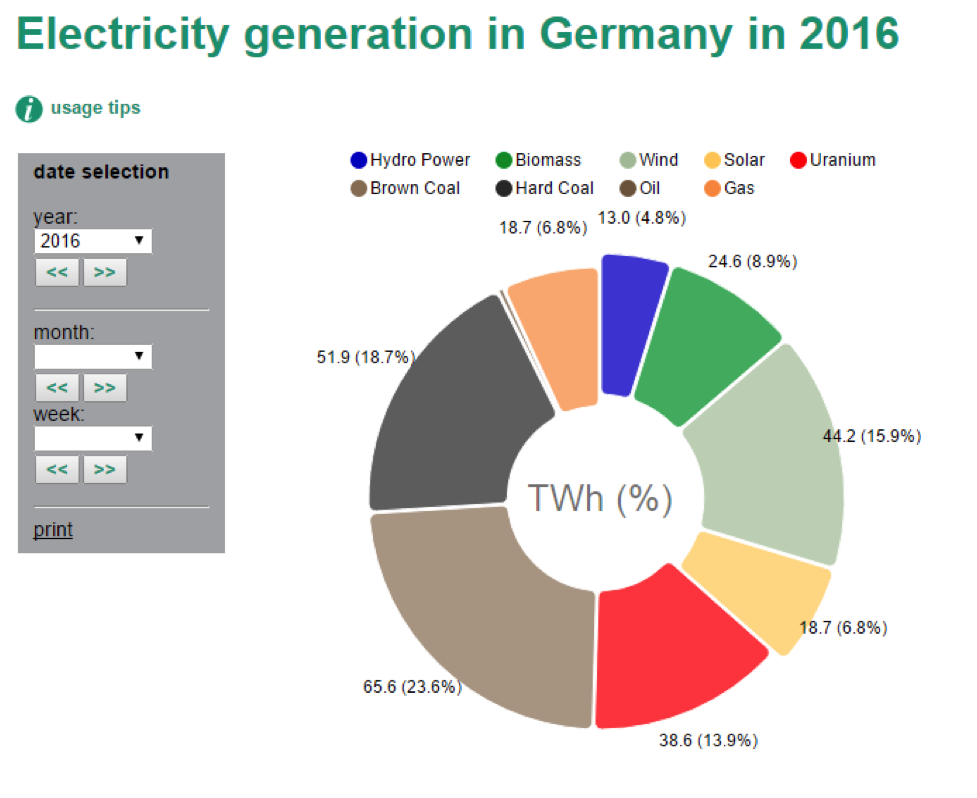 The difficulty comes when we have to calculate power demand. You see, the figures above are for power generation, not domestic consumption; they therefore include power exports, which are skyrocketing. But the targets apply only to the share of renewables in domestic demand, not overall power production. Because renewables have priority dispatch, foreign demand for German electricity increases production of non-renewable electricity, so no renewables are subtracted when we leave out power exports – because the renewable power would have been generated anyway.

Last year, Germany exported a record 50 TWh of electricity. For half of the year, that comes out to 25 TWh. In the pie chart above, total generation adds up to around 275 TWh. Subtract 25 TWh, and the roughly 100 TWh of renewables is almost exactly 40 percent. So in 2016, Germany seems likely to reach the lower end of the 40-45 percent range for 2025.

But a closer look reveals that some caution is warranted. Several features seem odd. For instance, Germany generally has between 3-4 percent hydropower, not 4.8 percent. Second, total power generation seems very low. Extrapolated for all of 2016, the 275 TWh from the first half of the year puts Germany once again at around 550 TWh for the year as a whole – far too low. Both of anomalies are the result of the use of live data.

A look at last year’s data allows us to identify the problem. Fraunhofer shows only 555 TWh of total power generation last year based on live data, whereas the official AGEB data show a whopping 652 TWh. The great disparity is the result of different data sets. Fraunhofer bases its live visualization on live power statistics from grid operators, which leave out conventional systems smaller than 100 MW. Apparently, Germany produces nearly a sixth of its electricity from such small conventional generators. The AGEB covers all of these small systems; Fraunhofer does not.

In the end, Germany may indeed fall slightly short of 35 percent renewables this year. Overall, renewable power production is up year over year by five percent, so we would expect something closer to 34 percent after the 32.5 percent share last year. But if this winter is windy, the target may yet be achieved – it is within reach.

Coal and nuclear down, gas up

Based on last year’s performance, we would have expected 70 TWh from lignite, which only came in at 65.6 TWh in the first half of this year. Likewise, hard coal is slightly down; around 52 TWh was generated, whereas 53 TWh would have been expected. Nuclear also would have only come in at 43 TWh, but it only reached 38.6 TWh – in the first half of last year, Germany had one nuclear plant more than it does now. Interestingly, natural gas continues its rebound, with a full 10 percent more electricity production – 18.7 TWh as opposed to 15 TWh.

The rise of relatively expensive electricity from natural gas would suggest that wholesale prices are up, but they are not. In June 2015, base load electricity went for 3.01 cents on the day ahead market, compared to 2.77 cents in June 2016 (source in German). Another explanation for the rise of gas could be the greater need for fast flexibility, with gas turbines simply outperforming all the other conventional sources.

Higher wholesale prices in Germany could mean lower power exports, but only if prices in neighboring countries are lower. They are not, though the difference is marginal. In France, the base load rate averaged 2.80 cents last month; in Switzerland, 2.77 cents – exactly in line with Germany. We will have to wait much longer for reports on our export data, but a brief look at EPEX indicates that the trading volume is higher if anything.