The Toronto Renewable Energy Cooperative (TREC) highlights some of the global estimates about payback to communities that allow their citizens to invest in renewable projects. But Craig Morris’s overview of the statistics shows the lack of comparable hard data.

Solar panels on a home in Killean, Puslinch, Ontario. The benefits of community solar are under debate (Photo by Laslovarga, edited, CC BY-SA 4.0)

What difference does it make if an out-of-town energy corporation develops renewable energy projects rather than local businesses and citizens? Entitled “The power of community,” TREC’s short study tries to answer that question.

The executive summary includes a number of interesting statistics, unfortunately without any links to the sources:

“A U.S. think-tank study found that local ownership increased the economic benefits of renewable energy projects by 50-240% by keeping money and jobs in local communities. The British government said community projects will result in 12-13 times as much community value reinvested back into local areas.”

Those two figures stated back to back almost undermine each other: “12 times more” is another way of saying 1,100 percent more, which is not even close to the “50-240%” in the first sentence. The problem is that we really don’t know what is being counted – or indeed, what should be counted. For what it’s worth, a recent investigation in North Hessen found the local benefits from a community-owned wind farm to be eight times greater than they would have been from a utility project.

But perhaps I am being too harsh as someone who has been trying to find reliable data for years. Almost no one looks into the matter and tries to quantify the benefits, which are admittedly hard to tally, so perhaps we should just be happy to see additional evidence of tremendous benefits.

So what are the benefits in Ontario? TREC and SolarShare, a community power cooperative, collected data on 17 community solar projects, including “a typical industrial rooftop” – a clear sign that we’re not just talking about residential arrays, but all projects funded and developed by citizen groups. The total economic benefit turned out to be 2 to 1; for each dollar invested, two dollars in economic activity was generated. For the math-challenged, 1 to 2 is an increase of 100%. 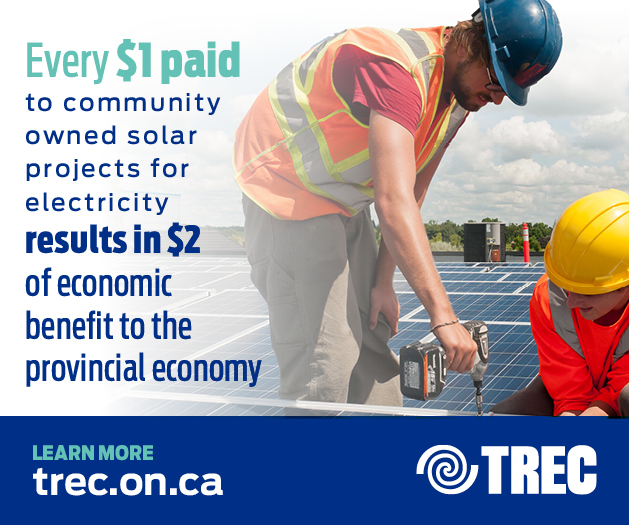 Of course, that’s all economic activity. The local benefits were smaller. Without locally manufactured solar panels and inverters, local economic activity still increased by 47% if investors and the developer were local. This finding is important because economies of scale require mass production of such equipment; not every town – and indeed, not every country – will have its own solar panel production.

Unfortunately, these findings are not necessarily applicable everywhere. As the study puts it, “Applying the figures from the SolarShare project to the broader community sector is more challenging as the costs and revenues of each individual project are unavailable.” But the investigation is at least further proof that community projects are a good way of bolstering local economies if politicians wish to do so.

Incidentally, community solar seems to be picking up in the US as well. According to GDM Research, the country had 94 MW installed at the end of 2015 – but another 173 MW in the pipeline for this year alone. One wishes, of course, that North Americans would focus not only on solar in their committee projects. The ILSR provides a great overview of US activity here.

The UK is also busy investigating ways to facilitate citizen investments in renewables. Without wishing to recommend any of the projects (an 8% return sounds fanciful to me), this website lists a recycled cooking oil project along with two solar options. Another platform lists even more investment opportunities. Energy4All’s sales pitch seems the most honest because it underscores the risk of losing your investment right below where it speaks of a “targeted” return of 5%.

Anonymous folks investing in your community is not exactly what the Germans mean by community energy, as I explained in the context of crowdfunding – which these websites resemble. So we need to be careful about a few things:

Most of all, it would be great to have some comprehensive standardized data on the actual local benefits of community energy.