They did it. They actually did it. The British voted against the European Union and in favor of “splendid isolation.” What will Brexit mean for European climate and energy policy? How will it affect the dynamics of greater climate protection that we are taking pains to maintain in the wake of Paris? Antje Mensen takes a look.

Heads of nations at the Paris Conference; how will Brexit affect the EU’s ability to carry out the conference’s terms? (Photo by Presidencia de la República Mexicana, edited, CC BY 2.0)

The EU is currently negotiating a major climate and energy framework for 2030. The Commission had already presented proposals for a reform of the EU Emissions Trading System (EU ETS) last summer. The sectors involved in the EU ETS are responsible for around half of Europe’s carbon emissions. Mandatory targets for emissions not covered by the EU ETS are to be presented on July 20, 2016. The EU’s Effort Sharing Decision provides for individual mitigation targets for each Member State. A Commission proposal to ratify the Paris climate agreement is also expected for this summer. In autumn, energy issues will be on the agenda, with legislative proposals on energy efficiency and renewable energy. All of these efforts remain overshadowed by the question of whether the EU will raise its hopelessly outdated and unambitious climate targets for 2030 and 2050 following the Paris agreement, and if so, when.

Brexit is not simplifying any of these debates. The previous rapporteur on emissions trading in the European Parliament, Scottish Conservative Ian Duncan, has resigned.

I have tendered my resignation as rapporteur of the #EUETS phase IV reforms. pic.twitter.com/XIjXh500sk

A Polish coal advocate is set to take his place, and other groups in the Environment Committee want to prevent this at all costs. A Polish rapporteur would be a “disaster” that no one wants, said a source in the Parliament. The Environment Committee was set to debate proposed amendments to Duncan’s weak draft report shortly after the summer break, but it is now highly doubtful whether it will be possible to stay on schedule.

Effort sharing may also face a delay. The fact that it is unclear whether the United Kingdom should still be included in the EU’s effort sharing significantly complicates the issue. Chances are that it will be – in part due to Cameron’s obvious stalling in recent days, which is likely to lead to an extended period of uncertainty. Word from the Commission to date has been that effort sharing will be presented as planned before the summer break.

However, there are strong voices in the Commission leadership and some Member States that could still put on the brakes – whether they are genuinely concerned that effort sharing currently has poor prospects, or simply looking for an excuse to drag their feet is another issue.

Overall, it would appear that negotiations in climate matters will be more difficult without the British, as they are among the supporters of an ambitious reform of emissions trading and have set themselves relatively far-reaching national climate targets. As part of the Green Growth Group, they had structured the cooperation of “progressive” Member States; what a loss the lack of British input would be had already become apparent in the months leading up to the referendum. In 2014, the United Kingdom was the only major Member State that wanted a higher EU climate target for 2030. Without it, we probably would not have gotten the “at least” before the 40 percent.

Will the role of the EU be weakened in international climate diplomacy?

Brexit may also have a number of nasty surprises in store for international climate policy. The British have always placed great emphasis on climate diplomacy; we can only speculate as to whether it will be possible to close this gap in the EU ranks, and if so, how. Fortunately, the question of how Paris would have developed if Brexit had already happened last year remains hypothetical. Still, preparations for the UN’s global stocktaking summit in 2018 have not become easier as of June 24.

Brexit – an opportunity for Europe’s transition to renewable energy?

On the other hand, Europe’s climate and energy policy may also benefit from the British departure. Some negotiations could reach a better outcome. This could be the case in renewable energy – a topic for which the British have much the same strange, seemingly irrational scepticism as for the European Union itself. The same can be said, albeit not quite as fundamentally, about the British stance toward energy efficiency. In both areas, the United Kingdom was often allied with the Eurosceptic Visegrad countries. At this point, an ironic “thank you” for the strange renewable energy target for 2030 is in order: while mandatory at the EU level, it is not to be broken down to national goals. And the existing weak energy efficiency goal of “at least” 27 percent also bears the handwriting of the British to some degree. Overall, the British myth of obsessive regulation by Brussels has tended to prevent progressive energy legislation rather than advance it. It is essential here to ensure that the Commission does not freeze in a state of shock, but to underscore that the time has come for the ambitious pursuit of Europe’s transition to renewable energy.

The big questions now are how the remaining EU Member States, the Commission and the Parliament will structure the Union in future, and what conclusions they will draw from Brexit. Will the trend toward deregulation and the dismantling of supposedly superfluous regulation gather momentum? If so, there will be tough times ahead for us as representatives of civil society. Or is this the start of a search for a positive narrative for the European project?

There is no doubt that the latter must be the case, and that this could lead to a happy ending for the EU’s climate policy in the medium term.

Polls of European citizens have repeatedly made it clear that they want climate protection and a transition to renewable energy. It is now up to the EU to show that it can be more than a market. The socially and ecologically sound decarbonization of the economy is the task of the century and the best example of challenges that nation states cannot meet by themselves. Anyone wanting to keep global warming well below 2°C – or even 1.5°C – cannot afford to stand still. 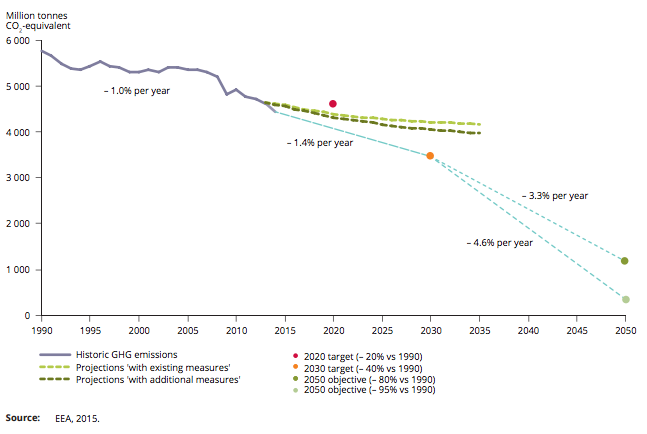 So far, the EU has not made a good showing of its implementation of the Paris climate agreement – the “at least” preceding the 2030 targets must not remain an empty phrase. The euphoric support for a 1.5°C target was perhaps not all that serious after all. Decision-makers must recognize that such a stance does not improve their credibility and fuels Euroscepticism. This is a great opportunity to show what Europe can do for its citizens and as a member of the world community – it only needs to be seized.