Although the Wall Street Journal has called the German energy transition a “fiasco,” Javier López Prol argues that renewables are clearly a success. Fossil fuels only seem cheaper as they externalize costs onto the environment, and that higher electricity costs are not the economic catastrophe that critics claim.

A few days ago The Wall Street Journal published an opinion article about “Berlin’s renewable energy fiasco”, whose main message, as you can guess, is the failure of Germany’s pioneering Energiewende (energy transition). Let’s review its two main arguments:

1.1. “The renewables never seem to fall in price the way boosters promise”

Figure 1 shows the evolution of Photovoltaic module prices. They have been declining over the last 40 years at a learning rate of around 20%. This would not have been possible if support policies had not been carried out when costs were still high. Further support will therefore translate into further cost decline (around half price in 20 years according to the conservative estimations of the IEA in 2014) and consequently lower electricity prices in the future. 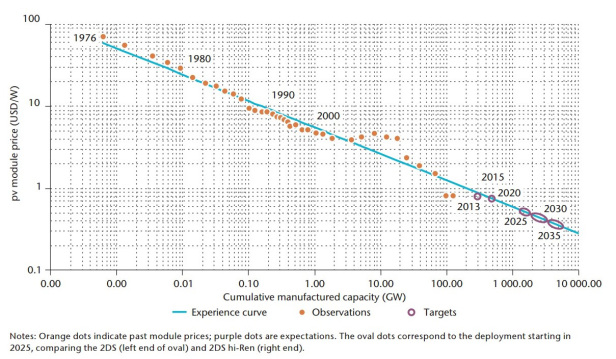 Figure 1 : Photovoltaic module prices and projection to 2035 based on learning curve ($/Watt; note that the axes are in logarithmic scale) (Source: IEA, 2014)

1.2. “Germany has spent some €200 billion ($228.09 billion) since 2000 transforming its energy industry into a green dream” and “market distortions caused by over-reliance on expensive but undependable power”.

Assuming the €200 billion figure in 16 years and ignoring discounting, that is €12.5 billion a year. According to Ecofys (2014), the external cost of electricity and heat generation in Germany is the highest of Europe, accounting for more than €40 billion a year. That is assuming a €50 Social Cost of Carbon (SCC) per ton of CO2, which appears to be too optimistic provided the latest developments in earth and climate sciences (such as this, this, this and this). Indeed, a recent article published in Nature Climate Change suggests a lower bound for the SCC of at least 125$1995/tCO2 (i.e., ~149€2015/tCO2), that is almost triple the cost considered by Ecofys.

Rather than market distortions caused by renewables, we should talk about the market failures derived from those externalities, which cause damages for the value of more than 3 times the cost of the current support levels, even with very conservative estimates. 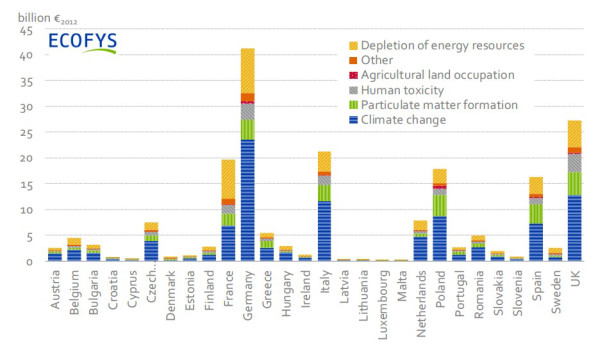 1.3. “By favoring solar, Berlin would be picking the power source that most exacerbates the problems with the energy transformation. It’s the most expensive.”

Again, it is the most expensive only because fossil fuels have externalized environmental costs. Therefore, it is not the case that coal and gas are cheaper, but rather that part of their real cost is not reflected in their market prices and therefore will be paid by other agents, such as third people (e.g. through illnesses related to pollution), or future generations (e.g. due to the future damages of climate change); not to mention other unquantifiable ecological damages such as biodiversity loss or ecosystems degradation.

Consequently, when we take into account external costs of fossil fuels, we find that solar is indeed a cheaper option. Moreover, bearing in mind its future expected cost development and the abundancy and spread of the solar resource, solar becomes not only an affordable energy source in the present, but a wise investment decision for the future. 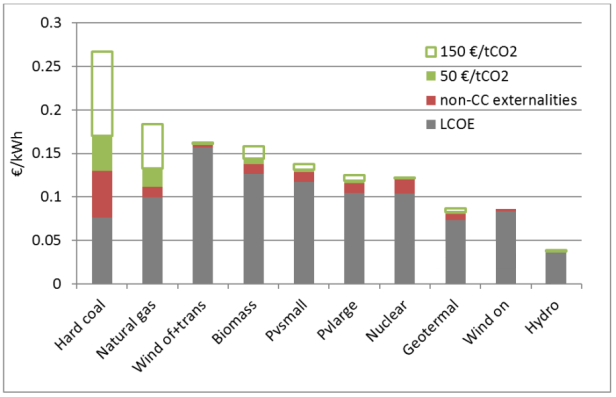 Figure 3. Levelized Cost Of Electricity (LCOE) of different generation technologies (€/MWh) taking into account externalities other than climate change and a Social Cost of Carbon of between 50 and 150 €/tCO2 (Source: own elaboration based on Ecofys, 2014)

As in any economic transformation, there are sectoral shifts. It is obvious that jobs will be lost in the fossil fuel sector, but others are created in the renewable sectors. The main argument, however, is that higher electricity prices are causing a decline competitiveness of the German industry and therefore leading to deindustrialization. Although labour impact of renewables needs to be analysed in detail, the general picture depicted by the Manufacturing Purchasing Managers’ Index does not indicate such a negative trend in the manufacturing sector caused by soaring electricity prices.

Apart from the international economic crisis in 2008-2009 and the short relapse in 2012, we do not observe a downwards trend in this indicator which assesses the general performance of the manufacturing sector. Indeed, the unemployment rate has reached its lowest value (4.2%) in Germany since the reunification (Figure 4). 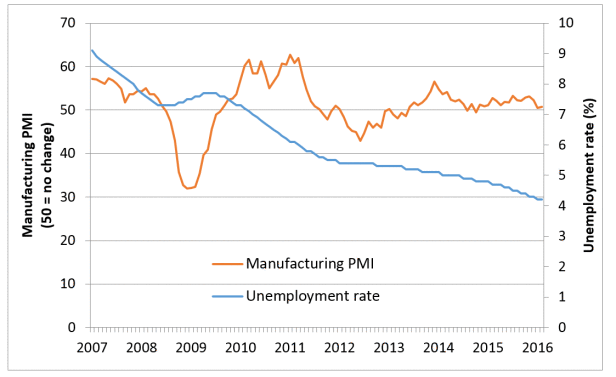 Renewables have a twofold effect on electricity prices: whilst on one hand they contribute to reducing the pool price of electricity, retail prices increase due to the cost of support policies. In the long term, as long as support levels decrease, the retail price will tend to stabilize again whilst the decreasing effect in the wholesale market will prevail.

Finally, although certainly higher electricity prices harm competitiveness as is conventionally understood, they better reflect the real cost of energy, and incentivize energy efficiency, which is another objective defined in the EU strategy 2020. Moreover, when dynamically understood, environmental standards can even improve competitiveness. As Porter and van der Linde puts it:

“Properly designed environmental standards can trigger innovations that lower the total cost of a product or improve its value. Such innovations allow companies to use a range of inputs more productively—from raw materials to energy to labor—thus offsetting the costs of improving environmental impact and ending the stalemate. Ultimately, this enhanced resource productivity makes companies more competitive, not less.”

The above discussion does not mean that solar is the panacea. Other measures (such as smart consumption and energy efficiency) and technologies will be needed to achieve a sustainable (in economic and environmental terms) energy supply. But it is clear provided the evidence mentioned above that solar will be a significant part of the solution.

Javier López Prol is currently pursuing a PhD in Economics at the Wegener Center for Climate and Global Change, University of Graz, Austria. He is focusing on the transformations to a low carbon economy, mainly in the energy sector and with special attention to the photovoltaic technology.

This article was first published on the Climate footnotes blog and is reposted with permission.