The German Greens had proposed a nuclear phase-out in 1984 in the Bundestag. (Photo by Bündnis 90/Die Grünen Nordrhein-Westfalen, modified, CC BY-SA 2.0)

In 1986, the world was a much different place. At the time, only 20 MW of PV had been installed worldwide. Last year, that same amount was newly built every three hours around the clock worldwide.

There was also, of course, no internet. “We printed out copies of all the reports and spent several weeks at a hut in the Black Forest typing up our manuscript,” Müschen recently told me. The publisher rushed to get the book out while everyone’s attention was still on Chernobyl. 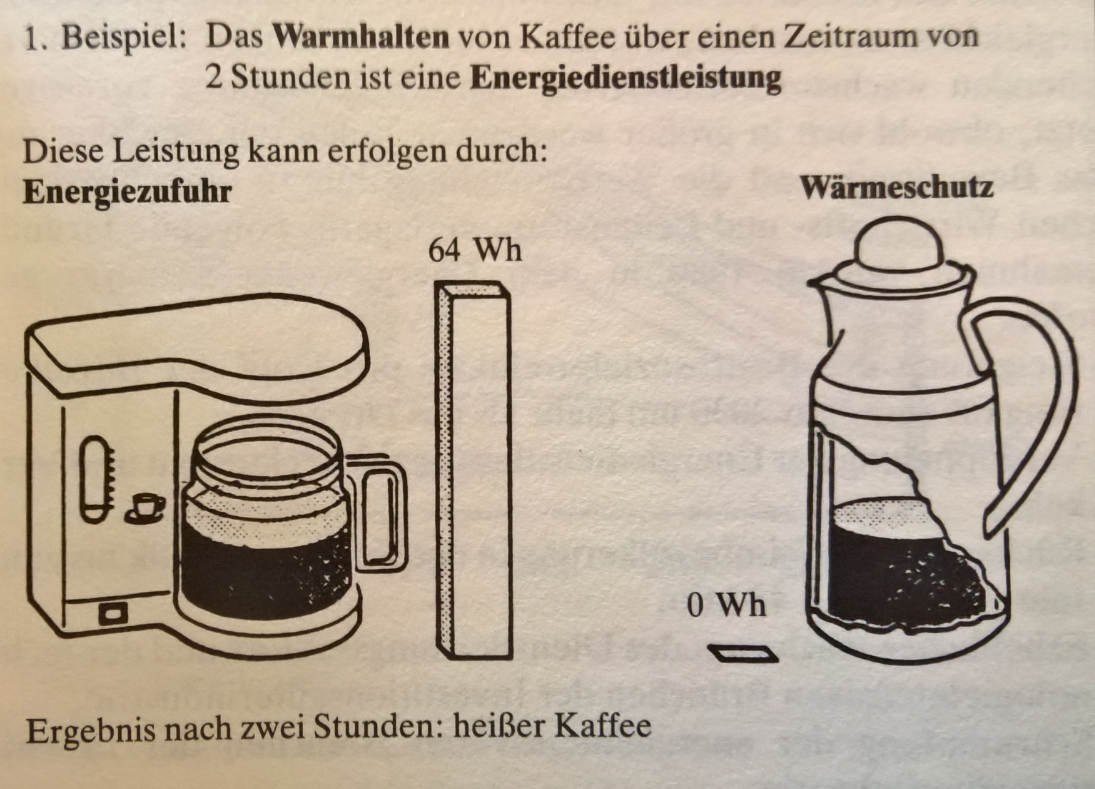 The phase-out campaigners educated the public. Here, the difference between “energy service” and energy is explained: to have hot coffee for two hours, you can use 64 Wh with a heat plate – or 0 Wh with a thermos. Source: Strom ohne Atom

The Öko-Institut was still very much a group of outsiders, but the tide was turning. The German Greens had proposed a nuclear phase-out in 1984 in the Bundestag. In August 1986 – four months after Chernobyl – the Social Democrats followed suit with their own call for a “safe energy supply without nuclear power.” In 2000, these two parties would come together to design the first official phase-out.

The book came out of the Öko-Institut’s Regional Energy Concepts working group, which the preface calls a good example of “how engaged, critical people come together of their own accord to step up the Energiewende.” Outsiders were needed. The authors complained that experts from the energy sector belittled such calculations from “hobby energy politicians.” The book quotes utility umbrella group VDEW (predecessor of today’s BDEW): “The level of public concern [after Chernobyl] might lead one to believe that Chernobyl is in Germany, not the Soviet Union.” On this issue, the Öko-Institut prevailed. A few weeks after Fukushima, the BDEW did not remind Germans that Fukushima is in Japan, but instead called for a “fast and complete nuclear phase-out”.

The pro-nuclear scenarios were astonishing. One expected 120 GW of nuclear capacity in Germany alone by 2030, consisting of 40 light-water reactors and 53 fast breeders. (France officially planned 170 reactors by 2000.) Fast breeders would have required five plutonium reprocessing units handling around 110 tons of plutonium annually – compared to only around 100 tons in circulation worldwide at the time, mostly for weapons.

Germany also aimed to sell nuclear to the world, but the authors said that “the nuclear sector’s export hopes from the 1970s have not been met,” with potential contracts with Iran, Egypt, and Turkey having recently been canceled. 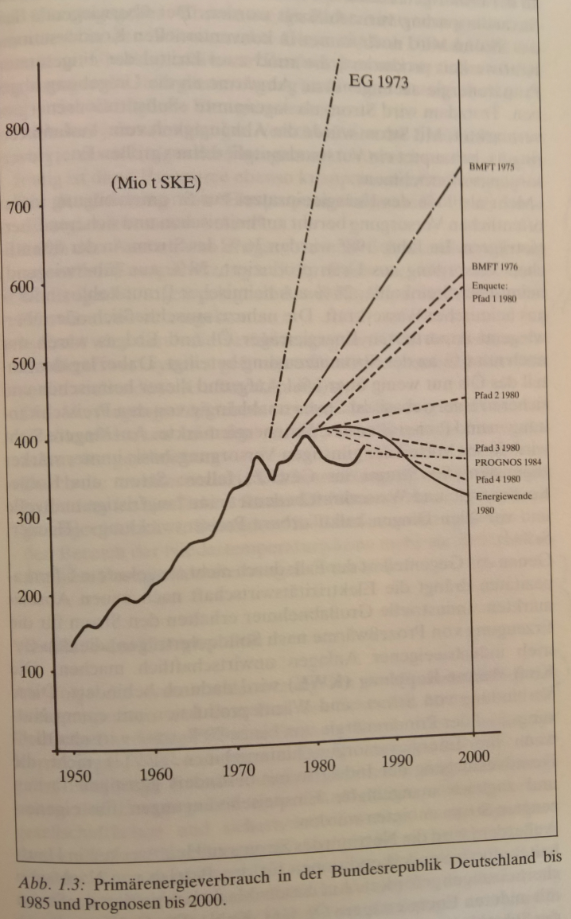 At a time when experts claimed the lights would go out without nuclear, the book demonstrates that an immediate phase-out in 1987 would have been possible. Power demand peaked in West Germany in 1985 at 58.8 GW, but the country had a net generation capacity of 98 GW. Roughly a 10 percent margin is considered healthy, so less than 65 GW would have been needed. Shutting down all 17 GW of nuclear would have brought the number down to 81 GW. This tremendous overbuild came about because large power plants need large backup; if a big plant suddenly fails, reserve capacity of that size must be available.

A temporary effect of a phase-out would, of course, have been greater pollution (global warming was just starting to overshadow the “dying of forests” – or Waldsterben – that year), but in the long run, cogeneration of heat and power would have reduced fossil resource consumption. The authors reject the argument that nuclear is needed for the environment, saying the nuclear firms making that pitch are the same ones that owned polluting coal plants. As I have previously pointed out, the nuclear and coal sector are one camp; the Energiewende, another.

The alternative the authors propose to nuclear energy is community energy (including municipal utilities). Citing Amory Lovins, they point out that simply recovering waste heat from smaller power generators for heat supply would increase efficiency considerably. Nuclear reactors, in contrast, immediately became huge, and waste heat is rarely recovered from them; the sector never delivered the often promised small nuclear reactors of, say, 10 megawatts. (Most reactors today have hundreds of megawatts; the largest, around 1,400.)

Energy sales were also identified as an obstacle towards efficiency. Utilities preferred to build natural gas lines (Germany has by far the most in Europe), and “wherever natural gas lines are built, district heat networks are not.” Instead of efficiency, the authors complain, private-sector energy suppliers pursue “profit maximization.” Elsewhere, the authors say we should “do more politically instead of relying on the market.” They repeat the argument from the 1985 Energiewende book that “greater competition” and “privatization” simply lead to oligopolies and monopolies.

The 1986 book contains uncompromising demands, such as: “There should be a ban on new large power plants projects without cogeneration.” The authors also argue that the complexity of nuclear power would increasingly make democratic control impossible, creating a technocratic state.

Overall, Chernobyl led to an educated German public, not a fearful one, as this book attests.