[UPDATE: Fraunhofer ISE’s Bruno Burger as informed us that lignite production is only reported on the next day, meaning that one day was missing from the month’s total when we wrote this report on December 1. Our report originally stated that wind power was ahead of lignite production for the month at 11.4 TWh vs. 11.1 TWh. The reduction for that day, however, puts both of them at 11.4 TWh, with lignite slightly ahead at 11.46 vs. 11.42 for wind. The race is so tight that we will have to wait until the official statistics are published next year.]

Until this year, wind power production in Germany had never topped 10 TWh within a single month, but 2015 started off with 10.4 TWh in January. November brought that level up to 11.4 TWh according to the latest figures from Fraunhofer IS. Wind power thus covered 23% of German power production and 25% of domestic demand that month. Keep in mind that these live visualizations come with some tolerances, so the data may be revised slightly. Hard coal, incidentally, came in at 8.6 TWh, nuclear at 7.4 TWh, and gas at 3.6 TWh. 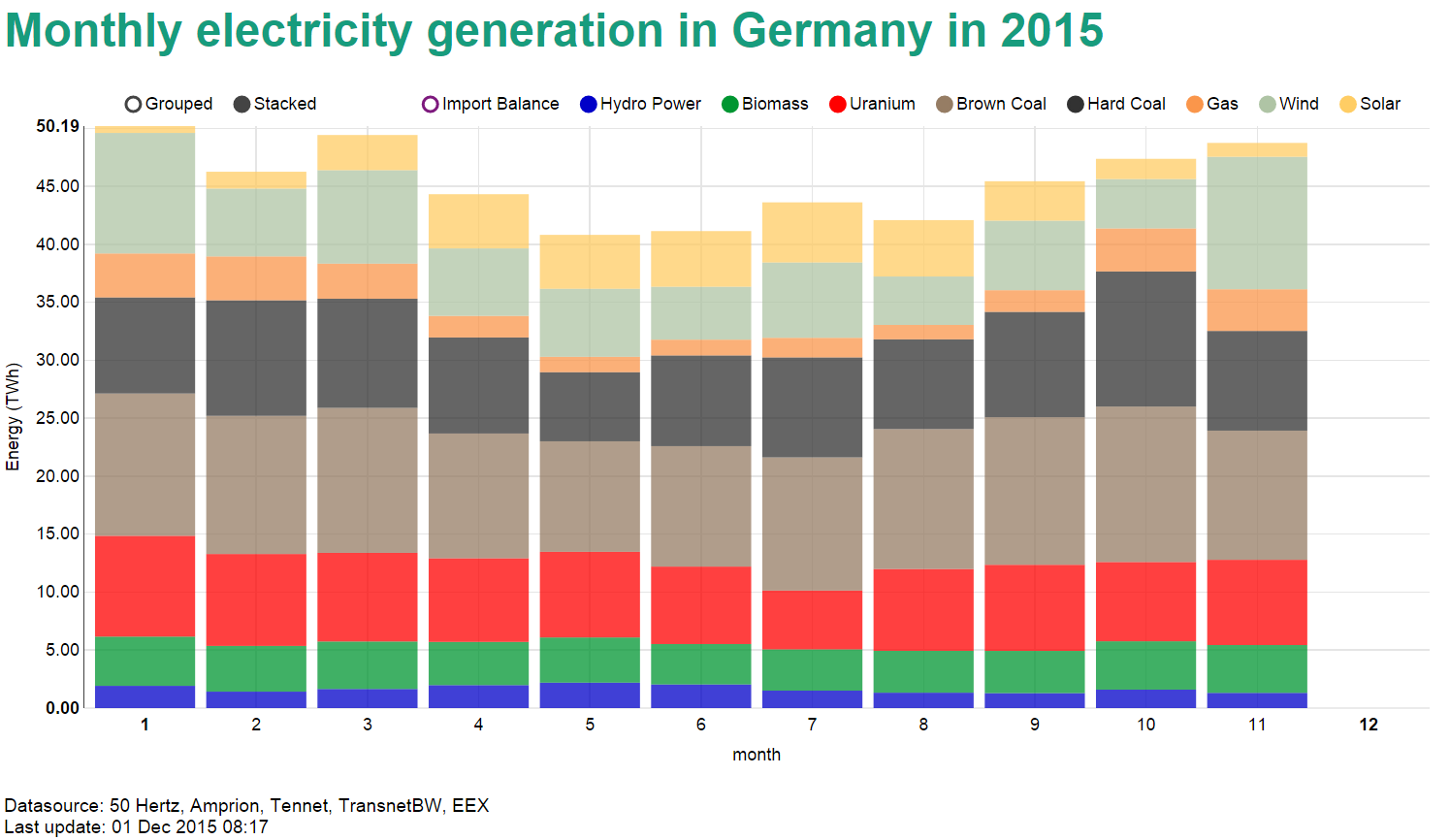 A second visualization shows that wind power not only nearly completely offset power production from hard coal in November, but also repeatedly cut into lignite. 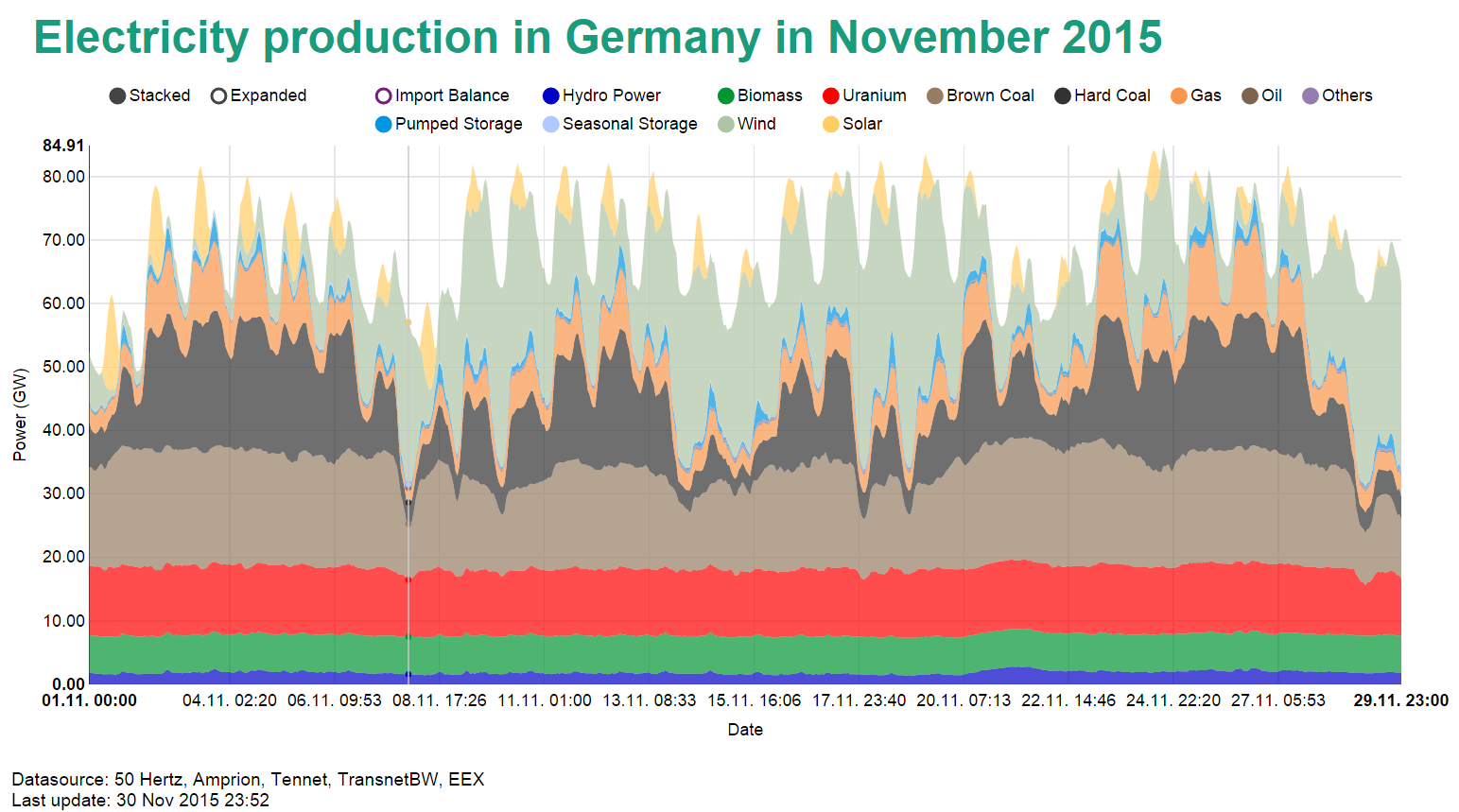 The power trading situation is also interesting for November. Wholesale prices on the spot market dipped into the negative four times in November and only briefly touched four cents per kilowatt-hour, the level that power firms need to make a profit. Otherwise, the price seems to have hovered below two cents most of the month. The result was an export surplus at practically every hour in the month. For conventional power providers, wholesale power sales – once the cash cow of the sector – is quickly becoming a money loser. 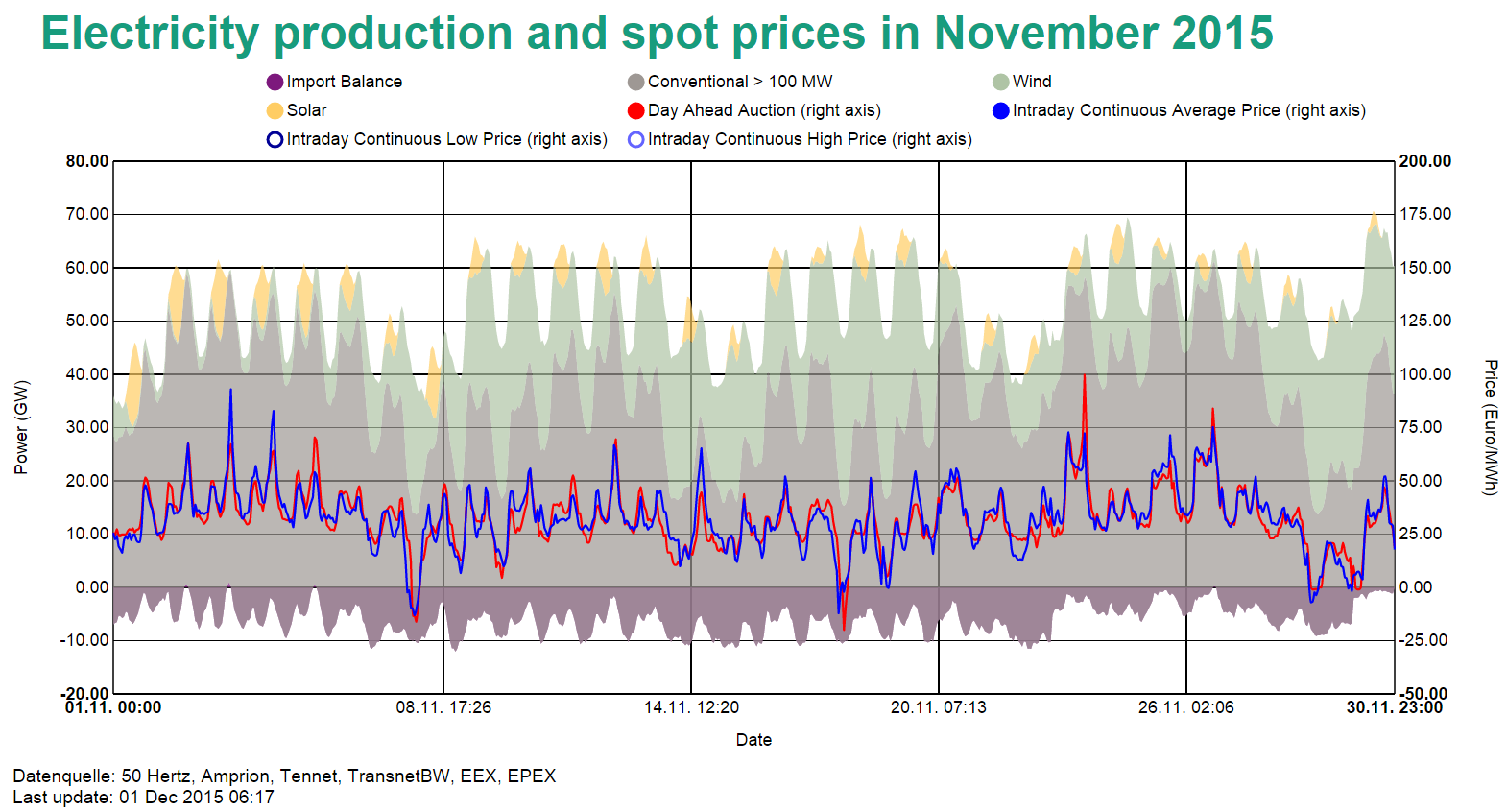 Without that up to 10 TW of exports practically all the time, lignite and nuclear plants would have had to reduce their output even further. Exports are keeping coal and nuclear propped up. In fact, Germany had already exported more electricity net in the first nine months of this year than was exported in the record year of 2014. In previous winters, hard coal and lignite collectively came in closer to 22 TWh. That number has now fallen below 19 TWh.

A nuclear reactor was switched off this year in Germany, which should have actually made more space for coal power. But wind power is growing tremendously in the country. Last year, a record volume of installations onshore was built, and the market volume will again be impressive this year. Likewise, 2015 is a record year for offshore wind in Germany.

Skeptical monitors of the Energiewende sometimes complain about Germany splitting coal power into two types (lignite and hard coal), with the charge being that the government is engaging in propaganda, as Matthew Karnitschnig of Politico recently tweeted, with a vice president of Statoil (Norway’s oil and gas firm) also chiming in to speak of “cheating with statistics” and adding “to me, coal is coal.” In fact, all energy sector entities make the same distinction, such as the AGEB and the BDEW – because the plants themselves run on either hard coal or lignite, not both. Furthermore, the mining process is different, and Germany will practically have phased out hard coal mining by 2018. From then on, the country will rely on imports, much as the UK has done in recent years. So the distinction between lignite and coal isn’t propaganda (this is).

But somehow, methinks the oil and gas sector doth protest too much about coal. A distinction similar to the one made between hard coal and lignite is also made between oil and gas, even by Statoil. To me, fossil fuel is fossil fuel. And consumption of that reached a 35-year low in Germany last year, something Politico has yet to mention.