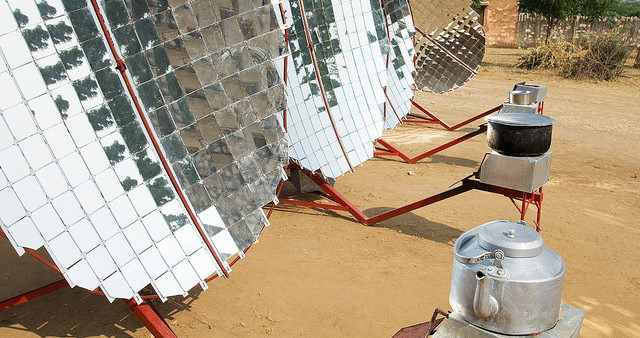 Life in the shanty towns around Southern Africa’s cities, where millions of people live in make-shift shacks, is precarious enough. Few have running water, flush toilets, or electricity in their homes. And when people have no alternative but to use open flames for cooking and lighting, the risks to their property and health are even higher.

When a candle is knocked over, or a badly-made paraffin stove explodes, fires rage notoriously through these informal settlements. One small accident in a neighbours’ house could mean an entire community going up in flames.

Cities in the Global South face a double challenge: addressing development and poverty, along with cutting carbon emissions. On the cooking front, here’s what’s working and what’s not.

This uses insulation to slow-cook food that’s already been brought to the boil. Some municipalities in South Africa have tried distributing the standard ‘hot box’ (made up of two fabric bags filled with polystyrene balls) to communities in informal settlements.

The idea is to begin cooking up stews, soups, or starches like rice or corn, for instance, using a stove, before popping them in their pot into the insulated hot box to continue slow-cooking just by retaining the original heat. It’s quite an affordable option (between about $11 to $18 for one), and low-tech, even though it might be a rather unusual way of cooking for many.

Yachika Reddy, with local energy consultants Sustainable Energy Africa says that people are generally open to trying it out in the few communities where it’s been introduced, although there hasn’t been much follow-up to see how many people are still using the hot boxes.

LPG is dirty, but better than paraffin

Paraffin can be extremely dangerous, particularly if people cook using poor quality stoves, which have a low ‘flash point’ and explode easily. There is a drive to encourage people to switch to liquid petroleum gas (LPG) which, even though a fossil fuel, is safer and significantly more efficient than paraffin.

The challenge is linking up customers with gas depots. People in shanty towns generally buy paraffin by the liter from their local ‘spaza’ shop, small independent stores in their neighbourhoods. The fuel is cheap, is always in stock, is easy to decant into any old container you have lying around, and is easy to carry home. Neighbourhood shop keepers also tend to give credit, which helps during the cash-lean times of a month.

Gas, however, has to be bought in bulk, in heavy metal cylinders. The gas depots are often far from communities, leaving people to lug canisters home by taxi or on foot. These vendors also don’t offer credit. If there’s a shortage of fuel, people revert to paraffin.

The parabolic solar cooker – the most common looks like a satellite dish which heats a pot by concentrating the sun’s rays – has not taken off in Africa, in spite of a few pilot projects. The cheapest units come in at $18, and higher end ones as much as $180.

Reddy says one reason for their failure is that they can only be used when the sun’s up, which is no good for people who are at work all day.

There is a UK company working on a photovoltaic (PV) solar electric cooking solution, Reddy explains. The system uses PV cells to charge a battery, which then powers a cooker at any time of day or night. The trick is getting a system strong enough to meet the energy intensive demands of cooking. But, says Reddy, the technology is looking promising, although still at concept stage.

The mbawula is about as old as the African city – an open drum, with holes punched in the sides, in which people burn outdoor fires using wood, paper, or coal. It’s so widely used in places like Johannesburg, that that city’s ambient air pollution was 10 to 15 times higher than World Health Organisation safe levels just over a decade ago. The health implications, in terms of respiratory problems for those exposed to the smoke, are significant.

Municipalities have tried to educate people about more efficient ways of stacking fuel in the drums so that it burns properly and efficiently and emits fewer harmful particles. Badly stacked fuel means it doesn’t burn completely, releasing harmful ash into the air, explains Reddy.

Ethanol fuel gel is a new kid on the renewable block. Some municipalities have rolled out pilot initiatives where they’ve tried to get the fuel, and the cookers that run off them, into communities by supporting retailers to stock this new tech.

But Reddy says this effort has seen its own set of hurdles: making sure vendors stock the fuel so that there’s a ready supply; and that the quality of the fuel is good. Poor quality fuel emits toxic vapours and this has serious health implications.

Leonie Joubert is a science writer and journalist, and currently works as a fellow with the University of Cape Town’s Environmental Humanities of the South, where she is looking at the political economy of the food system in her country.