As in other countries, German industry can be asked to change power consumption in order to stabilize the grid. Now, it turns out that the policy option is used so seldom that it is to be done away with – another sign that the concern about fluctuating renewables on the grid may be exaggerated. Craig Morris reports.

At the beginning of the month, the German government published a report on demand management in industry (PDF in German). The idea behind “AbLaV” (the official policy abbreviation) is that firms with large power loads can be asked to change consumption up or down as needed by the grid. Special payment is offered for this service, and it comes in at 2.50 euros per kilowatt monthly. These special payments are due regardless of how much power is used. An additional 1 to 4 cents is then paid per kilowatt-hour when power consumption is actually adjusted, though the average came in at the very top of that range: 3.95 cents. The signal comes when the grid frequency deviates by more than 0.3 hertz.

We are talking only about large, power-hungry firms. The report states that such contracts have only been signed with four companies, which can be asked to adjust consumption, for instance, by at least 50 megawatts within 15 minutes. A maximum of 1,500 megawatts can be requested in both directions (up and down). 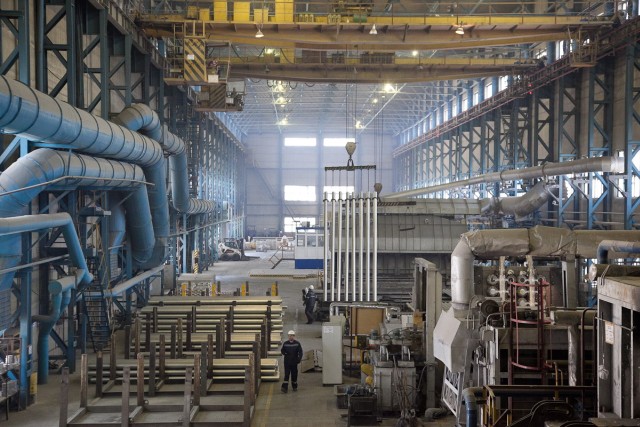 An aluminum production plant consumes a lot of electricity. The company can be asked both to postpone the next batch in order to reduce the load on the grid and to increase power consumption when there is excess electricity. In the latter process, the aluminum serves as a kind of power storage. (Photo by www.volganet.ru, CC BY-SA 3.0)

With Germany integrating a growing share of fluctuating wind and solar power in the grid, one would expect demand for this service to be increasing. And indeed, the process of industrial load shedding (as the reduction in power demand requested by grid operators is called) is widespread globally and used whenever weather events threaten power outages. Last winter, the option was frequently used in the UK, for instance.

There has been the occasional report about such requests in Germany, but not often. And again, the policy goes both ways in Germany – industry can not only be asked to shed loads, but also to increase power consumption when wind power production begins to cut into baseload plants, which do not like to ramp down.

While the report states that there is a need for such a service, it also points out that the frequency never deviated by 0.3 hertz, so the service was never used based on this automatic signal. In contrast, between 13 February 2014 and 26 March 2015 there were nine days on which the service was utilized, largely during the solar eclipse on 20 March 2015. On that date, a large amount of solar power disappeared suddenly from the grid only to ramp up again quite quickly – both events within around two hours.

As previously documented, however, Germany managed the eclipse without significant changes to power production from conventional plants. Indeed, the new report itself quotes grid operators confirming that the requests for industry demand management were “not really necessary” and that the technicians were mainly “testing this option.”

The entire policy cost 37.2 million euros from the second quarter of 2013, when it went into effect, until today. Almost all of that amount – more than 99 percent – was the flat monthly rate paid for readiness because so little power was actually shifted around. The report therefore finds that this policy was “far more expensive” than balancing services (primary control) would have been on the market “90 percent of the time.” In other words, the power market itself sends out strong enough price signals; there is little need at present for additional ones from grid operators.

But there may still be in the future. The number of re-dispatches – when grid operators tell power plants (as opposed to industrial firms) to adjust production in order to accommodate unforeseen fluctuations – is rising. But the report puts the average cost of those events at a mere three cents per kilowatt-hour.

The German Network Agency therefore recommends that the policy option be kept in mind but discontinued for the time being: “There was no need for industry demand management in the period under review.”