The Swiss and Danish electricity sectors have quite a bit in common. Both are flooded with electricity from all sides. Yet, their power mixes are very different. The Danes have mainly wind and coal; the Swiss, primarily nuclear and hydro. The power lines were mainly built for coal and nuclear. Craig Morris takes a look.

One common belief among proponents of nuclear is that wind and solar need to be exported at high levels of production. Denmark is a case in point. It got some 40 percent of its electricity from wind power last year. But in 2013, wind power peaked at 135 percent and has repeatedly topped 100 percent since. Obviously, if Denmark could not export this power, it would need power storage.

With nuclear, the question is not excess maximum production, but minimum power generation exceeding demand. One term to understand here is “must-run capacity” – the minimum level at which baseload plants like to run. Another crucial term is “residual load”: demand minus must-run capacity and renewables. French expert Bernard Chabot has already shown how often the residual load in nuclear-heavy France is negative; in other words, French nuclear power production is regularly greater than domestic demand, so nuclear power needs to be exported, lest the plants have to ramp down. So whereas Denmark depends upon exports to shed excess wind power at times of high production, France depends on exports to shed excess nuclear power at times of low demand.

But France is much larger than Denmark. A better comparison can thus be made with Switzerland. 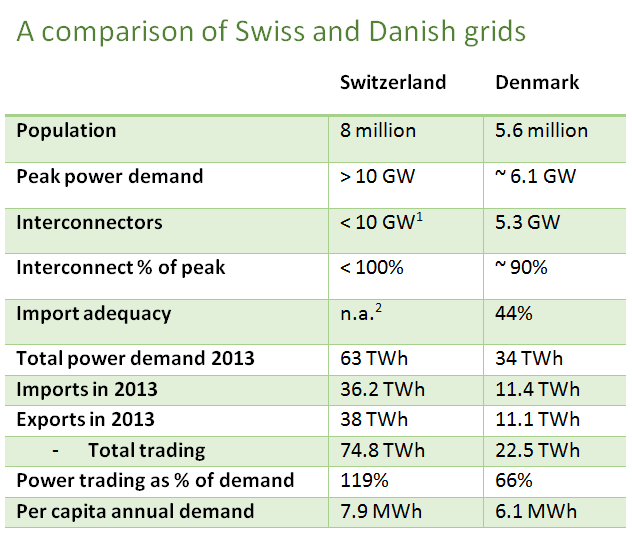 Source: own calculations based on Entso-e, SwissGrid, and Energinet.

Switzerland is a hub for power trading, especially French nuclear electricity, which passes from both France and Germany on to Italy. But note, as the graphic above explains at the bottom right, that power trading takes place based on prices, not in order to prevent blackouts, as is often (mistakenly) suggested.

The chart below from French grid regulator CRE shows the details. The legend at the bottom could be read from left to right starting with prices as the driver (long-term agreements) over to balancing and emergency contracts, both of which could be considered necessary to prevent outages. Clearly, almost no cross-border power trading was done to stabilize the grid at the time (but note that the data are from 2011). 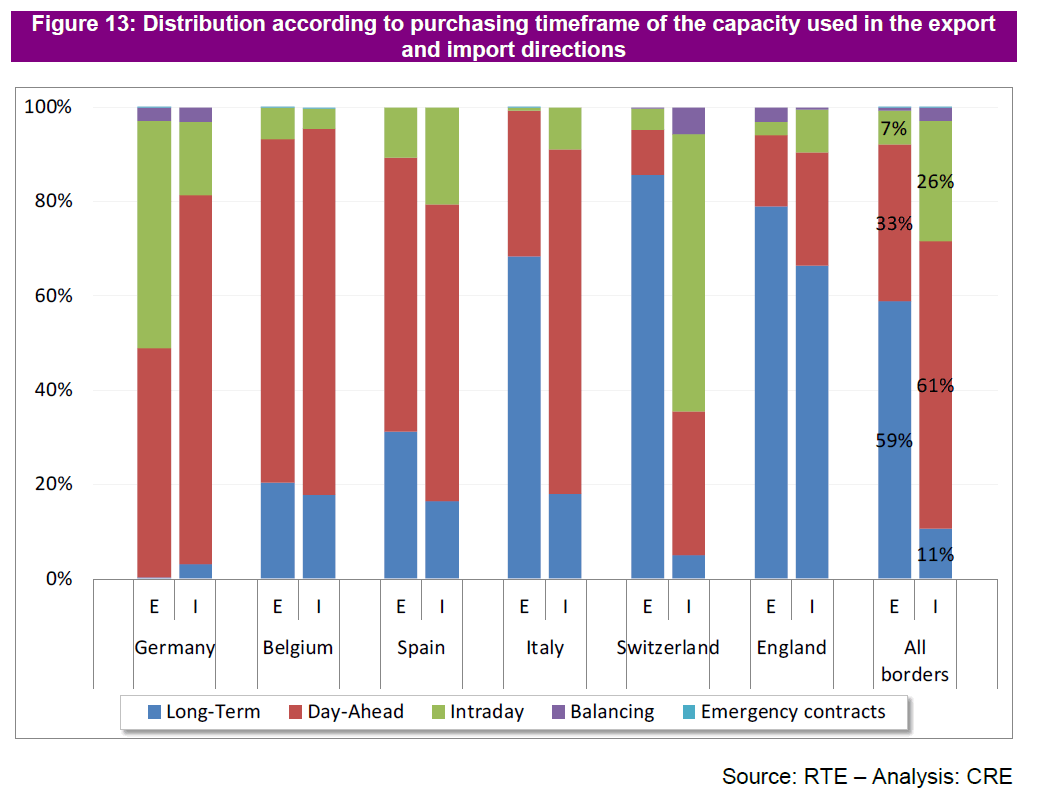 Likewise, Denmark is a hub for power trading between northern Scandinavia and the continent, Germany in particular. In fact, according to the Nordic Market Report 2014 (PDF) the interconnectors used the most was between Germany and Denmark; those lines ran at 77.1 percent of maximum capacity on average. Otherwise, Scandinavia benefits from surges in Danish wind power, which lower prices for everyone – and, of course, Norway has the potential to become northern Europe’s battery thanks to its tremendous hydropower capacity. The important thing to remember though is that these interconnections were not built for wind power; as Denmark’s Energy Agency puts it (PDF, slide 11), Denmark has historically been a power trading hub.

In conclusion, despite their much different power mixes, Denmark and Switzerland are both small countries flooded with foreign electricity. Renewables need such power trading when they reach the level of wind power in Denmark. But this power trading did not come about to suit renewable energy. It has always been there in Switzerland, which has historically had very large shares of nuclear and hydropower – roughly 95 percent in 2014.

1 The Danes have a cross-border power trading capacity of 5,280 megawatts (1,780 gigawatts to Germany, 2500 to Sweden, and 1000 megawatts to Norway). I was not able to find such a nice map as this one about Denmark for Switzerland; if you know of one, please use the comment box below. But this PDF from 2011 shows a total interconnection between Switzerland and neighboring countries of 9,965 megawatts (1,100 megawatts to France, 3,500 to Germany, 4,165 to Italy, and 1,200 to Austria). The Swiss have an even greater cross-border trading capacity than Germany (8,500 megawatts) in that tally.

2 I could not find an estimate for Switzerland, which is not a member of the EU. (If you have the data, drop us a comment below.) As a workaround, I express interconnections as a share of peak power demand. Adequacy differs from interconnections in that simultaneous need in other countries is estimated, not just the size of the grid connection.