A new study is making the rounds. It puts the price tag for renewable electricity higher than ever before. And it makes the same mistake as other high estimates – no subsequent savings are subtracted from these calculations. What happens if we do that? Craig Morris investigates.

If you want to calculate the net cost of the Energiewende, you can’t only look at expenses, you have to look at the savings too.

Remember former Environmental Minister Peter Altmaier’s estimate that the Energiewende would cost a billion euros? That figure drew a lot of criticism, primarily because it subtracted nothing – as though Germany would still be importing the same amount of fossil and nuclear fuel in 2050.

Now, a new study by the Institute for Economic Research puts the price tag at 28 billion annually in the power sector. To reach the figure, the analysts not only included the cost of feed-in tariffs, but also grid upgrades, the cogeneration surcharge, and the capacity reserve that is being set up. I’d like to tell you more about the paper, but it has not been released by the Institute (IW-Köln). All we have is the announcement (in German) by German economics daily Handelsblatt, which contracted the calculation.

Last year, payments for feed-in tariffs reached around 23 billion euros (in German), so the remaining 5 billion pertain to the other items. But the list is curious – I am not aware of any study that has ever included the cost of grid upgrades for the conventional power sector in the costs of the Energiewende. Yet, the entire German grid was set up for conventional central power stations, and the upgrades needed for renewables are small – and have been vastly overstated.

In 2010, German Energy Agency dena estimated that some 3,600 kilometers of power lines would be needed (Grid Study II). By 2012, that estimate had fallen to 1,800, almost none of which had been built – and yet, German power supply remains extremely reliable with almost no curtailment of renewables. Obviously, all those power lines originally called for were not needed. To put this into context, Germany has 35,000 kilometers of ultra-high-voltage transmission lines along with 95,000 kilometers of high-voltage lines – all built for conventional power.

And then there are the things that should be subtracted. In 2014, Germany earned 1.75 billion euros from power trading, primarily because low wholesale prices (partly brought about by renewables) have led to record power exports. Industry in particular benefits from those low wholesale prices. A study by Siemens from the beginning of this year found that renewable energy offset 31.6 billion euros in conventional electricity in 2013. That figure includes not only lower wholesale prices, but also offset coal, gas, and uranium imports. It does not include the aforementioned earnings from power trading, so we would need to add a couple of billion on to that amount, bringing us up to around 33 billion euros in savings. Subtract that from 28 million, and the Energiewende saves Germans around 5 billion annually. Likewise, the estimates of external costs (health impacts, etc.) would make the savings even greater.

All of these estimates are politically motivated. None of them tell the whole story. Siemens was clearly trying to jack up the savings in order to sell its products and services. Likewise, industry immediately pounced upon the Handelsblatt estimate to reiterate the preemptive complaining that the Energiewende is going to drive firms out of the country. 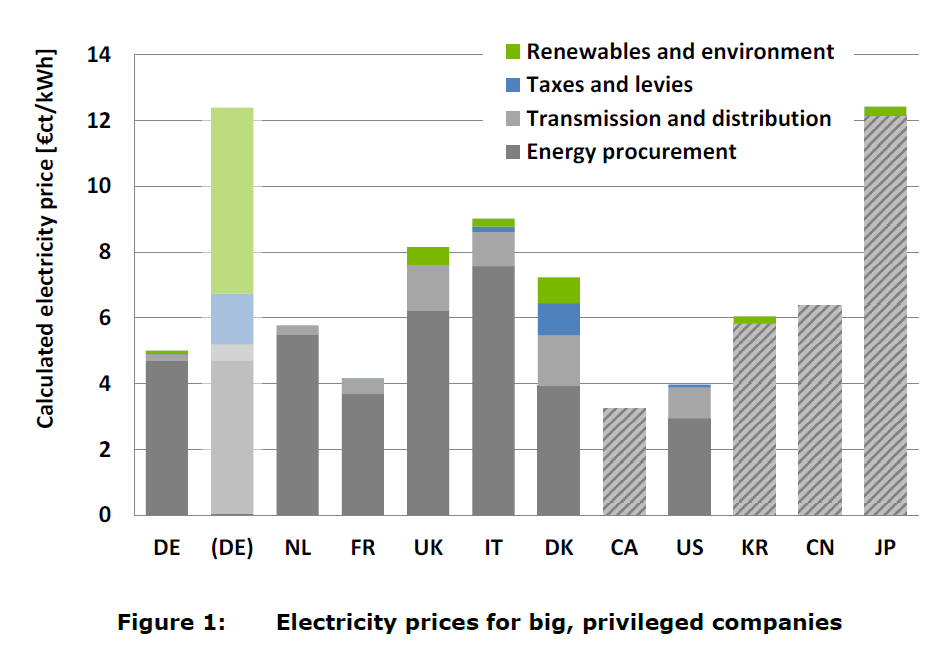 In reality, energy-intensive industry in Germany enjoys lower wholesale power rates while being almost entirely exempt from the renewable energy surcharge. The firms complaining the loudest have benefited the most from the Energiewende. Smaller firms that are not exempt thus cross-subsidize bigger companies, sometimes their own competitors, a fact that the VIK (German Association for Energy for Industry, which represents the industrial industry and power plant sector) does not want to admit. If Handelsblatt is so concerned about the cost impact on households, it could call for energy-intensive industry to pick up its fair share of the bill – but don’t hold your breath.

It is all the more disappointing that we find the VIK head Barbara Minderjahn complaining that “the Energiewende has failed to keep energy costs in check in Germany commensurate with international price increases.” Someone should tell the VIK that the Energiewende does not aim to provide low fossil fuel prices and that German industry electricity prices are indeed competitive internationally.