At the beginning of April, British climate NGO Sandbag published a press release entitled “For the first time, 4 out of 5 largest EU emitters are German lignite producers.” A shift took place between the fifth and sixth positions because the British Drax coal plant increasingly runs on imported biomass. Craig Morris says paying more attention to producers and less to consumers would help us see the issue in a clearer light.

Clearcutting in Oregon vs. lignite strip-mining in Germany: False dilemma in a world that should instead rely on renewables and efficiency. (Left photo by Walter Siegmund, CC BY-SA 3.0, right photo by Klaus Th. Erdmann, CC BY-SA 2.5)

The Drax coal plant in question reduced its emissions by 18 percent last year “as it switched to burning biomass,” Sandbag’s press release explains. The text puts the pressure on lignite sector, especially in Germany, to reduce emissions.

Is Sandbag praising Drax for lowering emissions by burning biomass largely imported from North America? When I asked Sandbag whether they have a position on the co-firing of imported wood pellets, I got no response.

It’s a dilemma – you don’t want carbon emissions, but biomass shipped across the Atlantic makes no sense either. The “solution” pursued at Drax is a perverse outcome of our focus on counting carbon emissions at the point of consumption, to the complete exclusion of points of production. As I recently argued, we let fossil fuel producers off the hook by counting only the emissions where the fuels are consumed. Thus, the US can claim to be reducing emissions even as it becomes the world’s largest oil producer. Countries like the United States, Norway, Denmark, etc. export fossil fuels – and hence emissions – even as they report lower emissions from domestic consumption at home.

Whether wood pellets from North America still reduce emissions when burned in Europe is a hotly contested issue. The energy used to transport the pellets might outweigh any benefits from a local shift from coal to biomass. But carbon emissions are not the only issue with biomass. Is the harvesting process sustainable?

To address these issues, we need to focus not only on consumption, but production. Over the past year, the EU’s focus on reducing emissions from power plants has been blamed for the clearcutting taking place in North America. My position has always been that North Americans have options; no one in Europe is forcing (or could force) them to hand over their biomass. Americans can choose to protect their forests at home.

In reality, sales of biomass to Europe are only a part of the North American tradition of ravaging landscapes. The photo below – of clearcutting in Canada – is part of a new social media campaign to raise awareness about the state of the planet. The photographer has also done some astonishing work at National Geographic. And as you look at the images of clearcutting and mountaintop removal in North America, remember what the president of the West Virginia Coal Association once said: “what good is a mountain just to have a mountain?” (For what it’s worth, Germany does not do this to its mountains often, primarily because its coal is found elsewhere.) 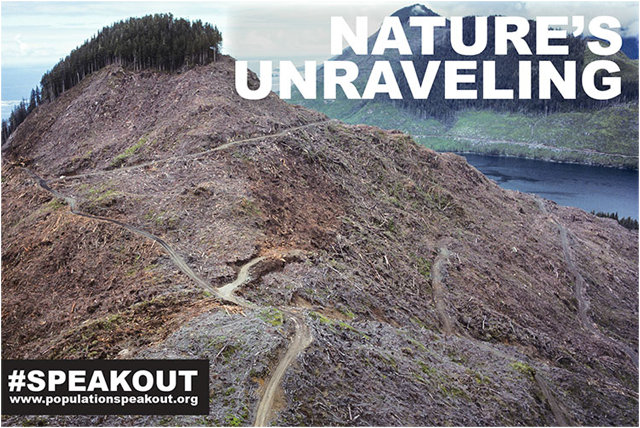 Pointing the finger at consumers will thus only get us so far. We need to start addressing domestic production more – both in terms of carbon emissions and general sustainability.

A recent article at Think Progress shows that the debate is slowly moving beyond pointing the finger at Europe. “In 2013 the UK imported more wood pellets from the US than the rest of the European Union combined,” the article explains. Yet, the text still speaks of “European policy” as a problem (as opposed to primarily the UK). The article also quotes a Princeton researcher, whose analysis tallies with mine: “the combination of European renewable policies relying on the biomass contributions and growing vested interests in the U.S. make it very hard to stop the expansion of the industry.”

The issue also highlights a crucial dichotomy in the energy transition, as pointed out by the article’s author, Ari Phillips:

“Instead of emulating the many European countries rapidly pursuing solar or wind power, the U.K. is relying significantly on burning wood to meet the E.U.-mandated goal of getting 20 percent of energy production from renewables by 2020.”

We can focus on “greening” our existing utilities and industry, or we can replace the old with something new. The UK is trying to make its existing infrastructure greener, and biomass co-firing at Drax is one perverse outcome, whatever other progress has been made. In contrast, Germany has focused on coming up with something new – hence the progress with wind and solar and the lack of biomass co-firing in coal plants.

But Germany is not without its perverse outcome either: the safe position of lignite. Here, Germany still has some “greening of the old” to do. And again, a focus on production is needed if Germany is to leave its lignite in the ground. Likewise, if Americans want to protect their forests, they don’t need to wait for the UK to change its policy – they can ensure that their own biomass production is sustainable.