We need to leave carbon in the ground. Yet, carbon emissions are counted at the source of consumption, not the source of extraction. Craig Morris says the different approach would put countries like Scotland, Norway, and Denmark in a much different light.

Out of sight, out of mind? The extraction of oil and gas does not count into Norway’s carbon emissions. (Photo by tjodolv, CC BY 2.0)

At the recent Energiewende conference held in Berlin, representatives of Denmark and Norway playfully went after each other on one of the panels. After the Dane praised his country for its high level of renewable energy (“we have a target of 100 percent renewable energy”), the Norwegian pointed out that his country was even further (“we are already there”).

Denmark and Norway can boast of such a great performance because none of the fossil energy they export is counted as their own emissions. Within the EU, Denmark is the only net exporter of energy, in fact, consuming only around 75 percent of the oil it produces. It also produces 50 percent more gas than is domestically consumed. Once coal imports are factored in, the Danes only have slight net energy exports, however, and the net amount has been shrinking in recent years.

The situation in Norway is far more dramatic. The Norwegians famously have practically 100 percent renewable electricity – but then again, they are roughly 5 million people living along countless fjords. It’s not exactly a solution that other countries can copy; you either have gigantic hydropower resources or you don’t. (For that matter, the Danes are 5.5 million people on a few islands and peninsulas in the wind blasting between the North Sea and Baltic – also not a situation that is easily copied.)

Note that the claims of 100 percent renewable almost always refer to electricity alone (including for Costa Rica), sometimes electricity and heat (such as the occasional German village), but never to the energy triad of electricity/heat/transport. Thus, Scotland also famously has a “100 percent renewable” target, but it is for electricity alone (PDF). And as we saw from the recent campaign for Scottish independence, much of the UK’s fossil fuel production falls within Scottish waters – so add yet another country to the growing list of “renewable” countries that are major suppliers of carbon to the world.

In the chart below, we see what the reality of carbon production is in Norway. Clearly, per capita carbon emissions in Norway would be an order of magnitude greater if the carbon the Norwegians provide to the world were counted domestically. 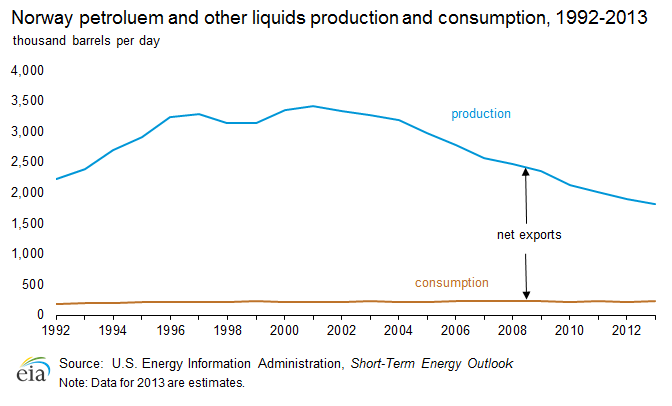 Even without exports, Norwegian statistics for carbon emissions are misleading. A Norwegian colleague tells me (based on Norwegian documents I cannot read) that the country’s 64.5 percent renewable share of final energy consumption in 2012 (PDF) drops to 50-54 percent when the energy consumed for offshore oil and gas exploration is included. Note that this energy actually is consumed domestically; we are not talking about energy exports here. A loophole in the way domestic carbon emissions are counted allows Norway to exclude energy consumed in the offshore oil and gas sector.

Why does this tally matter? If we take climate change seriously, we have to leave carbon in the ground. Countries that claim to be reducing their emissions even as they increase fossil exports to the world (yes, I’m looking at you, America) can only do so as long as carbon is exclusively counted at the point of fossil fuel consumption. One of the main questions about US presidential candidates concerns their stance on climate change, and one main gripe about current President Obama and candidate Hillary Clinton is that both “[tackle] it aggressively on the consumption side but [continue] to boost fossil fuel supplies,” as Ben Adler put it over at Grist.com.

There is a growing call for a change in the way we count carbon emissions. Over at the Guardian, George Monbiot criticizes the regular climate summits (the next one is in Paris) for “addressing only consumption” and completely overlooking production. Indeed, the Guardian is currently behind a divestment campaign to “keep it in the ground.” One way to greatly improve climate negotiations is to focus on the leaving carbon in the ground, which means we have to start taking account not only of points of consumption, but also points of production.

Viewed from Germany, the problem of how we count carbon has always seemed clear. While everyone complained about the slight uptick in carbon emissions from Germany in 2012 and 2013, my colleague Arne Jungjohann and I pointed out (PDF) that the sustained use of coal power in Germany was largely for export – so the Germans were being blamed for producing electricity consumed by the Dutch and the French in particular (partly using imported hard coal from the US, Russia, Columbia, etc.). It is a case of reverse carbon leakage, with emissions in those countries being attributed to the point of fossil fuel consumption (in Germany), not electricity consumption in those other countries.

As I wrote back in 2012 in reference to President Obama’s “all of the above” approach, “What we need is not a way to get more carbon out of the ground [such as fracking], but to leave more in.” It won’t be easy. Under Prime Minister Margaret Thatcher, the UK phased out domestic hard coal production only because imports were cheaper. No country has ever left profitable carbon resources in the ground. But the way we currently count carbon makes little sense. In the war on drugs, we see dealers, not users, as the main problem. Why should that be any different with our oil addiction?