The German government wants to limit emissions from coal plants that are more than 20 years old. Why the age demarcation? Why not just limit total emissions – or phase out coal entirely? Craig Morris says some clever Realpolitik is behind it. Best of all, it’s working.

Clouds loom over lignite power production in Germany – but what could become a burden for big utilities, might help a number of others. (Photo by Marcel Oosterwijk, CC BY-SA 2.0)

In the spring of 2014, when my colleague Arne Jungjohann and I finishing up the German Coal Conundrum, German Energiewende campaigners and energy analysts met in Berlin to discuss how to start a coal phaseout. Conclusions were drawn from the nuclear phaseout. It had clear targets and made clear enemies. And while nuclear plant operators in Germany are influential, they are also few in numbers: four, to be exact.

The situation is different in the coal sector. Germany has domestic hard coal and lignite mining firms. It also has numerous large coal plants, but even more small ones. Lignite plants in Germany are bigger on average than ones fired with hard coal. The companies that own lignite are bigger, and small utilities tend to focus more on hard coal and natural gas, often used in relatively efficient combined heat-and-power (CHP) plants. Many of these hard coal plants belong to one of the scores of the Stadtwerke (municipal utilities) in the country.

If you clamp down on hard coal – or coal in general – you have not just a few firms against you, but a large majority of German utilities, deeply embedded in local politics across the country. In comparison to the diverse hard coal sector, the lignite sector looks like the easier target to take down. The whole point of Realpolitik is not to call for an ideal goal, but instead for the one that comes closest to that ideal but is feasible.

If you had been a fly on the wall at meetings held last year by those who want a coal phaseout, you would have witnessed pragmatism. Go after lignite, and you make fewer enemies. In fact, you even make a few friends; by taking out lignite, you make space for generation from hard coal and natural gas. In other words, go after lignite, and you drive a wedge into the utility landscape, pitting those with lignite assets against those without – old-school divide and conquer. 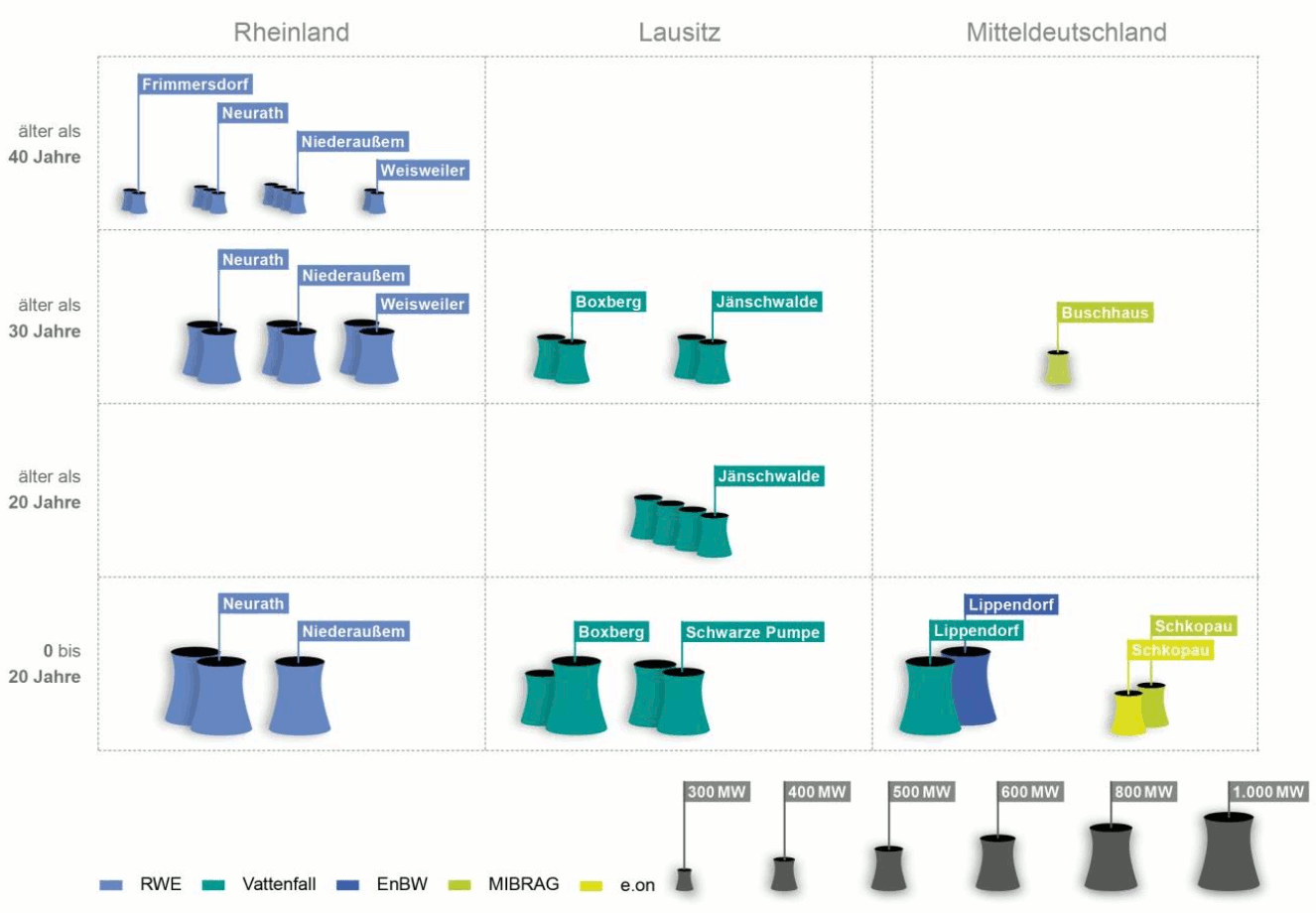 A diagram of lignite-fired power plants in Germany by age, region, and owner. (Source: Öko-Institut)

A study (PDF in German) produced last March (roughly at the time of the strategic meetings) by the Öko-Institut spells out the strategy quite well (and gives you an idea of who was involved in those meetings at the time). Figure 2 above shows the age of the power plants – from top to bottom, older than 40 years, older than 30 years, older than 20 years, and less than 20 years old. At the top, we see three different regions of lignite production in Germany. With one small exception, all of the plants that are 20 years old belong to only two companies: RWE in Rhineland and Vattenfall in Lusatia. 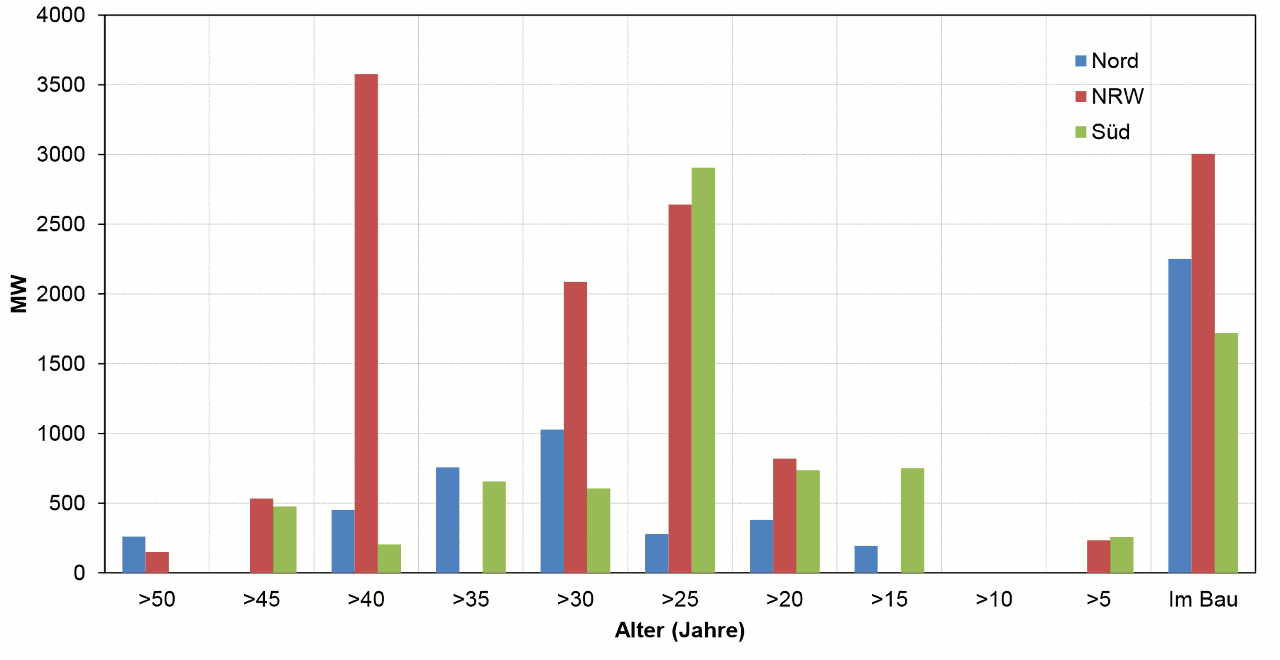 A bar graph of power plants fired with hard coal by region and age – but tellingly not by ownership. (Source: Öko-Institut)

Hard coal plants are even older on average, as the chart above shows. In fact, almost all hard coal plants are at least 20 years old. The chart does not attempt to show power plant ownership; there would be too many firms. Instead, the different colors represent different regions of Germany (“im Bau” means under construction).

Although the new carbon ceiling affects practically all hard coal plants in Germany, these plants will be able to generate around 20 percent more electricity within the proposed carbon budget than lignite plants will. And the real winner could be natural gas, which could produce roughly twice as much power within the same carbon budget.

From a climate perspective, the approach also makes sense. Lignite is the dirtier form of coal, and both types of coal are dirtier than natural gas. German lignite plants older than 20 years have emissions around to 1.100 g CO2/kWh compared to 900 g CO2/kWh for old hard coal – and less than half that for natural gas.

This month, we are witnessing the success of this strategy. The Energy Ministry’s climate plan doesn’t explicitly target lignite; after all, the focus is on age and emission levels, not energy types. Indeed, it actually affects a larger number of hard coal plants. Energy Minister Sigmar Gabriel plans to limit the amount of carbon that plants 20 years or older can emit. If the plants exceed that limit, they will have to purchase additional emission allowances (EUAs) from the EU-ETS. The goal is to reach the country’s climate target for 2020. Because lignite is the dirtiest, it will reach the carbon ceiling in the power sector faster – those plants will switch off earlier, leaving more of the market to hard coal and gas.

Here’s the best part: so many utilities stand to benefit from the climate plan. That’s why 75 municipals signed a letter to Minister Gabriel last week throwing their support behind his scheme. Most of them are more heavily invested in hard coal and gas turbines. Those working to clamp down on coal have thus successfully driven a wedge between big lignite utilities and smaller one with more hard coal and gas assets.

The outcome might not be what campaigners – foreign and domestic – calling for a complete coal phaseout hoped for, but consider this proposal the first step in a long-term strategy. Repeated divide-and-conquer quickly becomes a salami tactic. Right now, it’s old lignite that’s being cut off to reach the 2020 climate target. But utilities know they need to restructure if they don’t want to be hurt when the next cut is made.

This strategy could be the beginning of Germany’s coal phaseout. If so, it will be gradual – but then again, so is the nuclear phaseout. Originally implemented in 2002 after two years of negotiations with plant owners, the nuclear phaseout will end 20 years later – in 2022. The power sector simply is a juggernaut that moves in decades.

If the German government does continue down this path towards a coal phaseout, Germany will still be sitting on considerable lignite resources, with which affordable (but dirty) power could be generated. If Germany manages to leave this lignite in the ground, it may become the first country ever to step away from its own profitable fossil resources. And that will be something to celebrate.