If nothing happens, Germany will miss its 2020 climate targets. Mat Hope explains the situation and finds that additional efforts at decarbonizing the power sector are unavoidable.

Germany plans to its cut emissions by 40 per cent by 2020. But three years of increasing emissions have raised questions about whether Germany can stick to its target.

The country’s environment minister is adamant that Germany will not relax decarbonisation targets. Last week the energy and economics minister dismissed reports the target would be weakened.

The government is set to agree a new Climate Action Programme next month, designed to get the country’s emissions back on track. But a leaked draft shows a number of key issues are yet to be resolved.

In 2010, Germany embarked on an ambitious programme to decarbonise its energy sector, known as the Energiewende or ‘energy transition’. The Energiewende set a series of 2050 targets to guide Germany’s climate and energy policy for the next 40 years.

To assess the Energiewende’s progress, the government also set shorter-term targets. A goal to cut emissions by 40 per cent by 2020 compared to 1990 levels is just one of these.

But Germany’s greenhouse gas emissions have been rising for the last three years, bringing this interim goal into question. 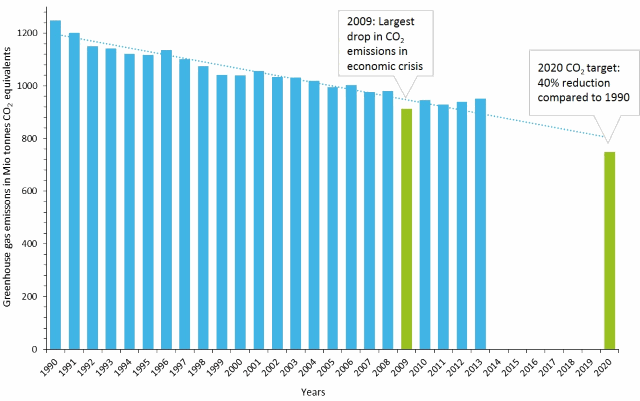 Government analysis suggests the Energiewende’s current policies mean Germany will cut emissions around 33 per cent by 2020 compared to 1990 – seven per cent short of the 2020 goal.

Analysts say the government has to implement new policies to cut an extra 87 million tonnes of carbon dioxide in the next six years if it is going to close the gap.

Germany’s environment and energy ministers both say that Germany’s new Climate Action Programme must ensure that the 2020 target is met, despite German newspaper Der Spiegel reporting the target would be weakened earlier this week.

But there remain important questions about how the government intends to do this. Most emissions savings are expected to come through decarbonising Germany’s energy sector. Controversially, the draft Climate Action Programme doesn’t quantify how much less carbon dioxide it expects to the energy sector to emit in 2020, compared to its current plans.

The government expects the Energiewende’s current policies will mean the energy sector emits 70 million tonnes less in 2020 than it did in 2013. But if the government is to hit its overall 2020 goal for the whole economy, it’s going to need more emissions reductions from the energy sector.

This is tricky, because the main cause of Germany’s recent emissions rise is an increase in the use of coal to generate electricity. Coal was responsible for about 45 per cent of Germany’s power in 2013, compared to about 42 per cent in 2010. That means phasing out coal use is likely to be a prerequisite to hitting the emissions reduction goal.

Germany’s energy minister has ruled out using government regulation to force a rapid coal phase-out. Instead, the government hopes to use the EU’s emissions trading scheme to make coal a less economic option.

But there is a lot of uncertainty about whether proposed reforms to the EUETS will curtail coal use. The UK recently called on the European Commission to tweak the proposed reforms, and bring the date it plans to implement them by forward by three years.

The leader of Germany’s green party and MP, Oliver Krischer, says the draft action plan’s policies will not be enough to hit the 2020 climate goal. Germany’s environment minister acknowledges that there needs to be “intensive talks” between ministries to ensure the programme is credible before it is adopted.

There couldn’t be a much worse time for the world’s flagship decarbonisation programme to stumble. Government representatives are set to meet in Lima in two weeks’ time to lay the groundwork for a new global climate deal, due to be agreed by the end of 2015. The world will be watching Germany closely to see what happens next.

This article by Mat Hope (@matjhope) was first published at The Carbon Brief and is reposted with permission.