This month, the Heinrich Böll Foundation and the European Climate Foundation presented a study conducted by Germany’s Institute for Economic Research (DIW). It found that Germany could reduce its carbon emissions considerably and stabilize the power market by shutting down numerous coal plants. Nonetheless, it is unclear whether the government will heed the findings, as Craig Morris explains.

Starting a coal phaseout is great for the climate, great for EU industry policy, great for the German utilities and good for renewables – but utilities need to be pushed by politics first. (Photo by Kateer, CC BY-SA 2.5)

The call for a coal phaseout has been in the foreground for the past month in Germany. It all started with a leak about a discussion proposal to switch off between 5 and 10 GW of coal plant capacity, equivalent to around 5 to 10 percent of dispatchable power generation in Germany. For a brief time, it seemed that the discussion might focus on how to decide which plants would be shut off and how power plant operators, which are generally private companies, might be compensated. All of that came to a screeching halt recently, however, when German Industry Minister Sigmar Gabriel openly opposed the idea. His three main concerns were job losses in the coal sector and the cost of power for industry, and that Germany would be unable to perform two energy phaseouts simultaneously: nuclear and coal. (Note that no one is calling for a coal phaseout to be completed by the end of the nuclear phaseout, so Gabriel is essentially challenging a straw man.)

Carbon emissions are another concern. Germany is likely to miss its carbon reduction target for 2020 by several percentage points, a factor that Minister Gabriel simply denies without explaining why. Instead, the WWF finds (report in German) that the situation is even worse than the government calculates because it assumes higher carbon prices and shorter coal plant service lives than exist in reality.

Now, the German Institute for Economic Research (DIW) has produced a study (in German, but with a 1-page executive summary in English) investigating one scenario almost exactly like the one officially proposed: the shutdown of three GW of hard coal capacity along with six GW of lignite. The economists find that this reduction would reduce carbon emissions by 23 million tons per year, roughly a third of the gap of 70 million tons annually as calculated by the government (the WWF believes the real figure is 87 million tons). 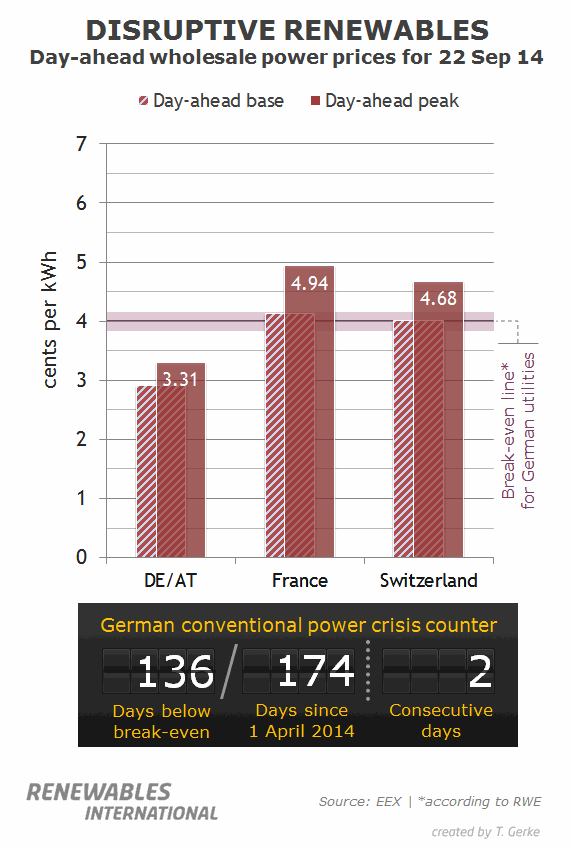 (On some days, the gap between wholesale power prices in Germany/Austria (DE/AT) and in France and Switzerland is quite large, such as on this normal workday in September. Removing excess coal capacity in Germany would bring these prices back into balance. Source: Renewables International)

In line with our recent paper entitled German coal conundrum (also explained in this recent article), the researchers showed that a reduction in capacity (GW) does not directly lead to a reduction in the amount of coal power produced (GWh). In their scenario, there is a slight shift towards power from natural gas due to higher wholesale prices for electricity, which increases by some 26,000 GWh, but there is also more electricity from hard coal (13,000 GWh). Fortunately, power from lignite, the most carbon-intensive of all three, drops by 40,000 GWh.

Crucially, the DIW expects this scenario to increase wholesale power prices by a third, from 3.8 to 5.1 cents per kilowatt-hour. A 33 percent increase sounds like a lot until you consider that 5.1 cents is in line with historic values; wholesale prices have dropped by nearly a cent over the past two years alone. In other words, Germany now has unusually low power prices, so the proposal merely brings the level back in line with historic averages. (Retail rates would probably not be greatly affected because any increase in wholesale prices directly reduces the renewable energy surcharge to the same extent.)

Higher wholesale prices would have multiple beneficial effects. First, EU officials in Brussels (along with governments and firms in neighboring countries) would no longer complain about unfair competition with German industry power prices. Second, utilities would all suddenly be making 33 percent more money from power sales. At least temporarily, there would be less talk about a “utility death spiral,” and perhaps we could also postpone the discussion about capacity payments for the time being as well.

In short, starting a coal phaseout is great for the climate, great for EU industry policy, great for the German utilities and good for renewables, which need more flexible back-up from gas power stations, the main beneficiaries of the coal phaseout. The power providers won’t shut down these coal plants themselves, however, because of the prisoner’s dilemma; whoever goes first loses. The government is needed as a negotiator between these firms.

Up to now, Gabriel had put his foot down firmly on the side of the low industry power prices and powerful coal unions. There is still a brief window of opportunity, however. On December 3, Chancellor Merkel’s cabinet meets to agree on a climate package. Various news sources are reporting this week that Gabriel proposed at a meeting on Monday that coal plants owners get together to agree on how to reduce carbon emissions by 22 million tons, almost exactly the DIW figure. So perhaps negotiations continue behind closed doors.

A document leaked to German weekly Die Zeit (report in German) reveals that the entire Environmental Ministry is rebelling against Gabriel’s plans from the Industry Ministry, but the fight is unfair – Gabriel is not just another minister in the cabinet, but also Vice-Chancellor.