It’s not easy to assess the impact of the Energiewende on industry. On the one hand, German wholesale power prices are lower than in neighboring countries and falling. On the other, we read that German industry pays above-average prices for power. Now, a study by Green Budget Germany (FÖS) provides a revealing comparison. Craig Morris investigates.

The study starts with the data collated by Eurostat, which clearly shows how expensive electricity is for German industry. 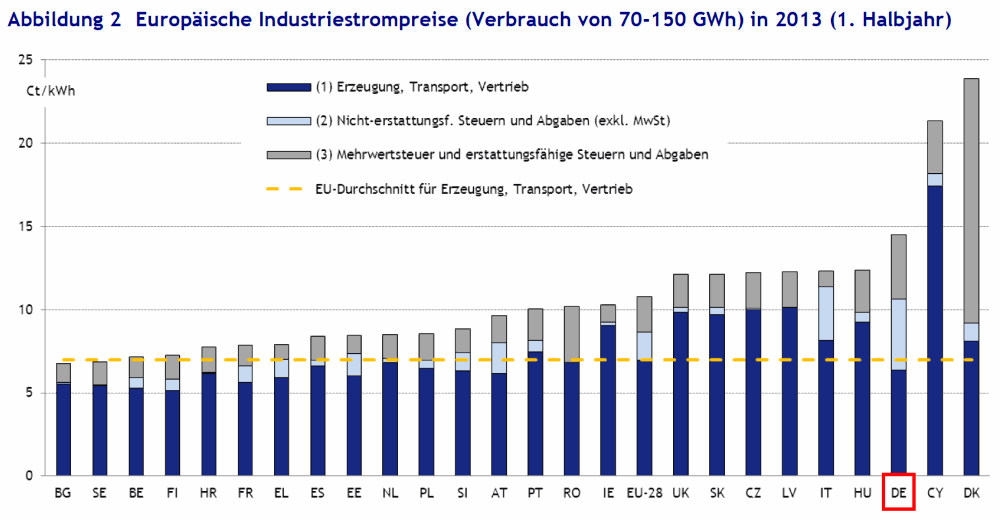 The dark blue area represents the cost of power generation, transport, and sales; the light blue area above that, “nonrefundable taxes, levies, etc.”; finally, the gray area at the top is refundable taxes, levies, etc. (such as VAT). It looks like German power is quite competitive if we just look at the dark blue area, and we can forget the gray area, which represents costs business pass on to customers anyway. Now, if we could only make that light blue area smaller…

Actually, as FÖS explains, Germany already has, and that’s the big problem with this chart. The analysts found that Eurostat mislabels the renewable surcharge and the cogeneration surcharge as non-refundable, even though there are generous industry exemptions for both of these items. For instance, the renewables surcharge can be as small as 0.05 cents for the biggest power consumers; Eurostat puts the average at 4 cents. Furthermore, FÖS points out that the electricity tax, which is similarly mislabeled at Eurostat, is up to 90 percent refundable.

Clearly, the price a firm pays in Germany depends on its level of exemptions, an issue we have discussed previously. This industry segment is considered “large” at an annual consumption of 70-150 GWh, though lowest surcharge applies to energy consumption above 100 GWh, so many of these firms qualify for the greatest exemption.

So what does energy-intensive industry pay?

Did Eurostat make similar erroneous assumptions for other countries as well? FÖS does not investigate, but Germany has faced particular scrutiny for its industry exemptions to surcharges on electricity from Brussels, and the first chart in this article clearly shows that Germany has the highest “non-refundable” surcharges of any country. So the difference in other countries would be smaller anyway.

In the chart below, FÖS compares Eurostat’s estimate to a maximum (left bar) and minimum (right bar) price with respect to the extent of exemptions. I won’t bother you with a translation of each item, but clearly all of these taxes and surcharges are a bigger issue than the power price itself – and Eurostat’s estimate is towards the high end of the spectrum. 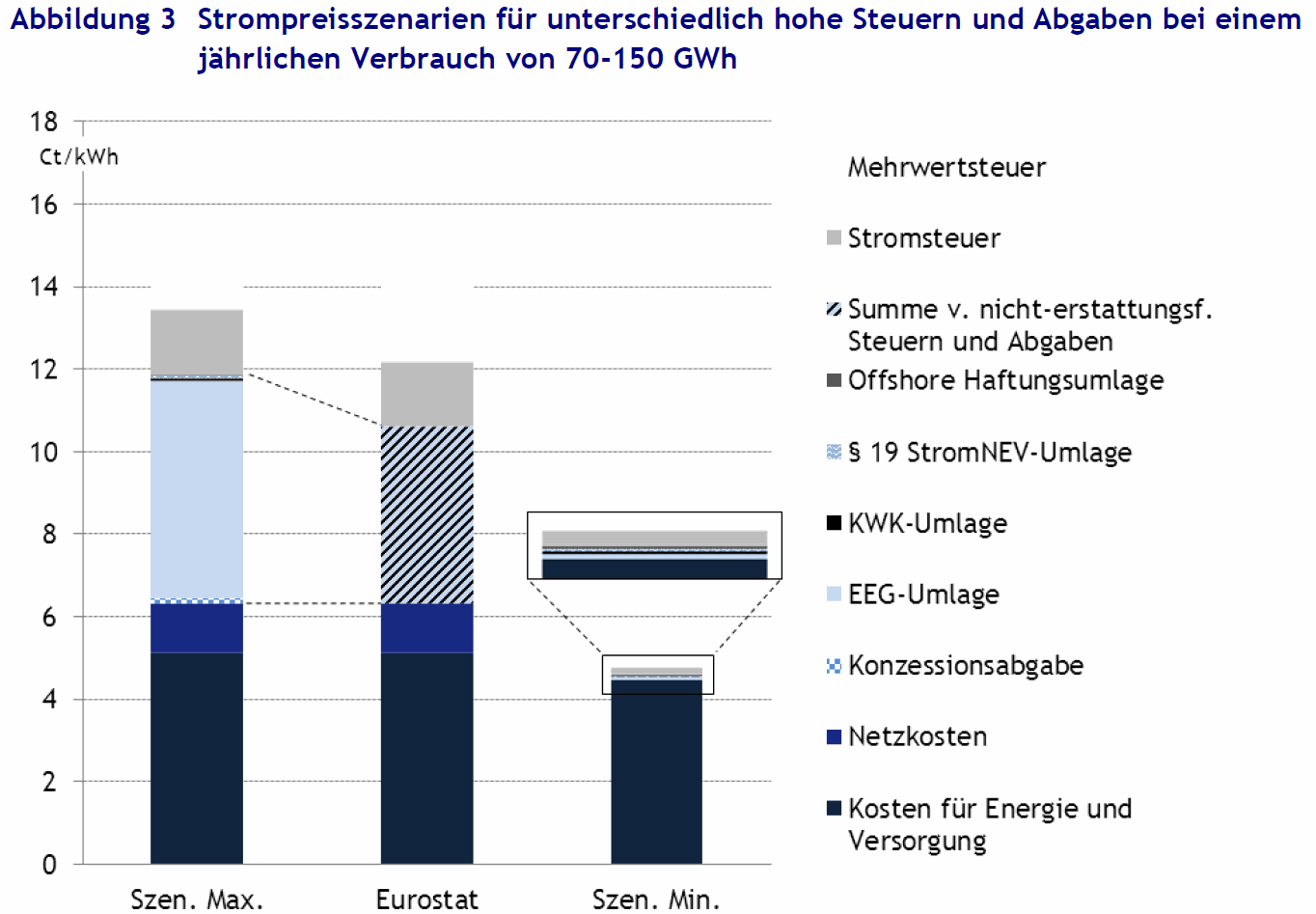 Power-intensive firms (with consumption greater than 150 GWh per year) pay only around 4.8 cents for a kilowatt-hour because they have so many exemptions – less than half of the value indicated by Eurostat. And FÖS estimates that the price is probably going to fall to 4.1 cents this year as wholesale prices continue to plummet.

It is worth noting that Eurostat has historically been far above other estimates, such as the one from German statistics agency Destatis based on a survey of industrial firms. In the chart below, we see Eurostat’s estimate for 2010 for the 70-150 GWh of annual power consumption coming in above 12 cents per kilowatt -hour – compared to the less than eight cents (right bar) that the firms themselves said they paid on average within that spectrum of consumption. The bar in the middle represents all production firms, including smaller ones, and even that bar is lower than Eurostat’s.

The situation is unfortunate because most estimates like those of Destatis and the VIK (Energy Association for German Industry) are only published in German, making Eurostat a major source of such information in English. The situation gets even stranger – German industry power prices are actually becoming more competitive, not less. In the chart below, FÖS found, based on Eurostat data not including taxes and levies, that Germany is now cheaper than the other big EU countries aside from France. Notably, only Germany’s power has gotten cheaper since 2007. Maybe Germany will even drop below France this year?

Since 2007, German industry power prices (blue line) for firms consuming between 70-150 GWh have fallen both in absolute and relative terms.

These findings are nothing new, incidentally. Last year, German environmentalist organization DUH reviewed some of the same source material and drew a similar conclusion – German industry power prices are becoming more competitive, not less. At least within the EU, Germany’s energy-intensive industry need not worry about uncompetitive power prices. In my next post, we take a look at what FÖS has to say about competition from the US.