Two German research organizations have investigated claims that low US power prices might entice German firms to relocate. As Craig Morris reports, they found a mixed bag of enticements without a clear signal that German firms should leave.

Industrial consumers in Germany pay lower power prices than they would in Massachusetts and many other US states – while enjoying a more reliable grid. (Photo by gynti_46, CC BY-NC-SA 2.0)

In my previous post, I discussed a study recently published in German by Green Budget Germany (FÖS), which found that, in an EU comparison, German industry power prices are already lower than frequently reported – and becoming more competitive, not less. Does that hold for a comparison with the US as well?

It turns out that methodology makes such a comparison difficult. The classification of 70-150 GWh per year for large industry in Germany is not made in the US, so a direct comparison between the two countries for this category is not possible.

Further complicating the matter, power prices range greatly in the US, from 3.2 cents in Washington to 24 cents in Hawaii. (All prices indicated in euros at an exchange rate of 1 USD to 0.778 EUR). FÖS therefore focuses on Texas and Pennsylvania, which have average industrial power prices of 4.3 and 5.6 cents. These two states were chosen because they have a “similar industry structure” to Germany’s. It is worth pointing out that both of these states have benefited from lower power prices due to the shale gas boom, so FÖS has essentially chosen two examples likely to make German power prices look high.

Nonetheless, the price that a German firm consuming at least 100 GWh per year pays was estimated at 4.8 cents last year. For German companies that have the greatest exemptions from surcharges, power prices are thus lower than in Pennsylvania but higher than in Texas. It remains to be seen, however, whether the losses from power outages in the US cause greater damage than any savings from low power prices.

FÖS points out that power outages are much more common in both of those states than in Germany. SAIDI is a value representing power outages longer than three minutes in duration not caused by natural events (such as the weather). The latest available figures were 93 minutes on average in 2013 in Texas, compared to 115 minutes in 2012 for Pennsylvania – far above Germany’s 15 minutes over the past two years. Such outages cost manufacturers a lot of money, though specific estimates are hard to come by, and FÖS provides none.

A more detailed view by sector would be revealing, but publicly available US data do not allow for such a comparison, FÖS explains. The US average for industry is calculated in the simplest way possible: the revenue collected is divided by the amount of electricity sold to produce the average industry price including all taxes, levies, etc. No further classification as possible based on this data within industry groups.

Another study, this time published by Agora Energiewende in English, takes a similar look at the situation between Germany and other industrialized countries (with a focus on the US). One of their charts clearly shows the difference a sector-by-sector comparison makes. 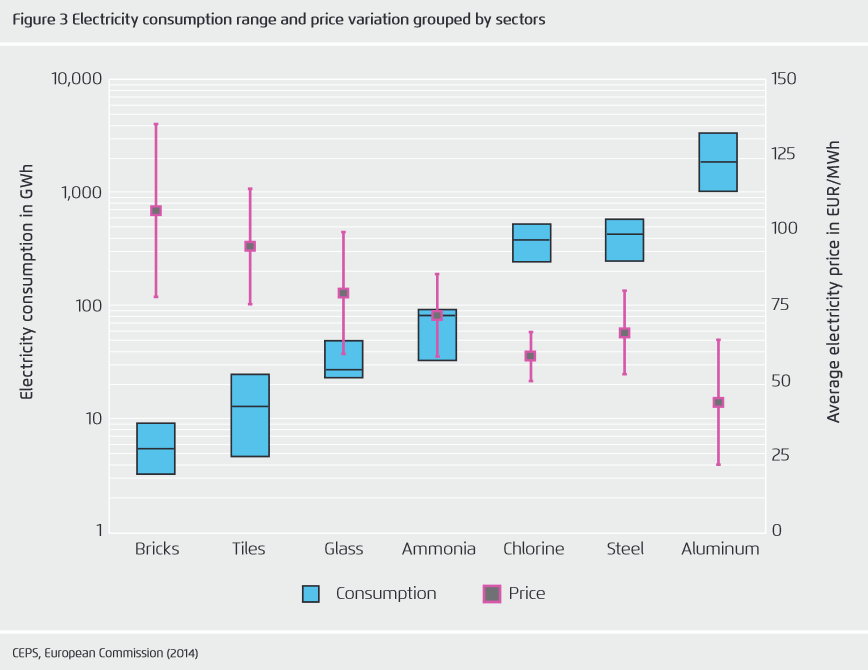 Here we see an overview of power prices in Europe by sector. As power consumption increases (blue boxes), the range of power prices drops (red lines). In other words, Europe in general has pricing schemes in place to ensure that the largest power consumers pay the least per kilowatt-hour.

Another chart in Agora’s study shows a clear distinction between France and Germany. In both countries, power prices drop as consumption increases, but most of all the gap between both countries practically disappears by the time we get to the most energy-intensive firms. 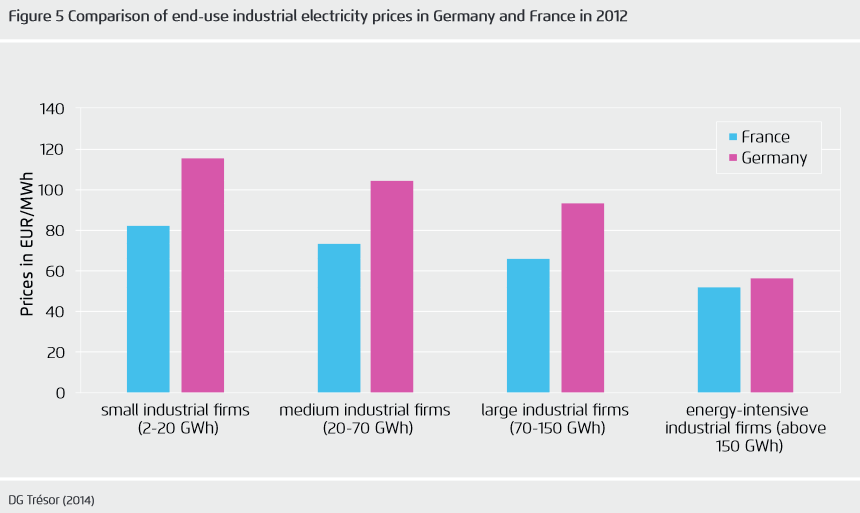 It is also worth keeping in mind, as FÖS points out, that energy costs only make up 2.1 percent of gross production value among industrial firms on average, compared to 16.8 percent for labor. Note that energy costs must make up 14 percent of a firm’s gross value added for it to be considered energy-intensive.