The Institute for Energy Research (IER) says angst is a main driver behind the Energiewende, which will fail to reduce emissions without shale gas, especially without nuclear. Craig Morris says some critics sound like they are a bit afraid themselves – that the Germans might pull off their transition without fracking or nuclear.

The biggest fear of critics of the Energiewende is not that it will fail – but that it will succeed. (Photo by Günter Hentschel, CC BY-ND 2.0)

In its critique entitled “Germany’s angst over hydraulic fracturing and emissions reduction targets,” the IER writes:

“[…] if Germany does insist on meeting its own CO2 goals, banning hydraulic fracturing would close the country off to a source of relatively low-emission energy and make meeting its stated targets more difficult.

There is nothing to argue with in that sentence, but lots of problematic statements elsewhere – starting with the title.

Charges of German angst pop up in whack-a-mole fashion. They are easy to disprove, especially when we take account of the reaction of other nations to nuclear accidents.

Concerns about nuclear risks only entered the foreground in the German debate after the accident of Chernobyl in 1986, when German officials warned the public of the risks. The country implemented its first nuclear phaseout as a reaction – 16 years later, in 2002. Indeed, the government that implemented that phaseout took office in 1998 and spent four years planning and negotiating the details of the phase out with experts and nuclear plant owners. Such a timeframe seems more professional than panicked.

Italy swiftly reacted with its own referendum after Chernobyl by instituting a nuclear phaseout in 1987. The Italians shut down the last of its four nuclear plants in 1990. They did not have a plan to replace that nuclear power, so Italy is now the largest power importer in Europe, primarily from France. But perhaps Italy’s decision is smarter than initially meets the eye, for the Italians seem to have told the French, “We are happy to take your nuclear power, but you run the risks for us.”

Compare this to Sweden’s reaction – not to Chernobyl (1986), but to the much less severe accident at Three Mile Island (1979). In 1980 – at a time when photovoltaics was a technology for outer space and the development of the first modern, but still small wind turbines had not yet even started – the Swedes decided in a referendum to phase out nuclear by 2010. The Swedish nuclear phaseout failed because the Swedes, like the Italians, had not taken the time to think about how nuclear power could be replaced.

Austria had already conducted a referendum in 1978, the year before Three Mile Island, to block the commissioning of the country’s first completed nuclear plant. Since then, the finished plant has rusted away; it never produced a single kilowatt-hour, and Austria adopted a nuclear phaseout in 1997, five years before Germany. Seen within its European context, Germany’s reaction to nuclear over the past few decades seems downright sensible.

Granted, Chancellor Merkel’s phaseout of 2011 was a surprise. At the time, I called it incompetent and irresponsible. As meticulously detailed and flexible as the 2002 phaseout had been, the 2011 phaseout was sudden and drastic – and constituted the worst kind of governmental intervention in a market and privately owned assets. The revocation of the 2002 nuclear phaseout by Chancellor Merkel only a few months prior to the accident at Fukushima must also be kept in mind in this context; in the summer of 2010, the commissions of German nuclear plants had been extended by 8 to 14 years. The phaseout of 2011 constituted the second about-face on nuclear policy in eight months.

I think the IER and I can agree that the way the 2011 phaseout was handled left room for improvement. But we part ways when it comes to the general justification for a nuclear phaseout in Germany. They write that “Germany is highly unlikely to suffer from a tsunami.” True, but that doesn’t mean there are no risks.

This kind of thinking is what security expert Bruce Schneier calls security theater – not real security, but only acting to make people feel safe: “If we concentrate airport security on screening shoes and confiscating liquids, and the terrorists hide explosives in their brassieres and use solids, we wasted our money.” A nuclear meltdown in Germany would not be the result of Soviet ineptitude or a tsunami, but rather of a combination of technical and human failure, possibly with some natural disaster as the trigger. Several German nuclear plants were built on tectonic fault lines and lack even basic earthquake protection. The entire country is prone to flash flooding, but numerous German nuclear plants lack proper flood protection. Unforeseen events are possible.

Germans understand that the next nuclear accident could easily be different than Chernobyl and Fukushima. But as Merkel realized in 2011, it could take place in Germany – for various reasons.

Germany knew how to replace nuclear

Unlike the Swedes and Italians, the Germans knew how to replace nuclear back in 2002 – and they have even replaced all of the lost nuclear power since 2011. The IER charges the opposite:

“Germans have turned to coal to back up their intermittent renewable technologies and to ensure that they have adequate power to satisfy electricity demand.” 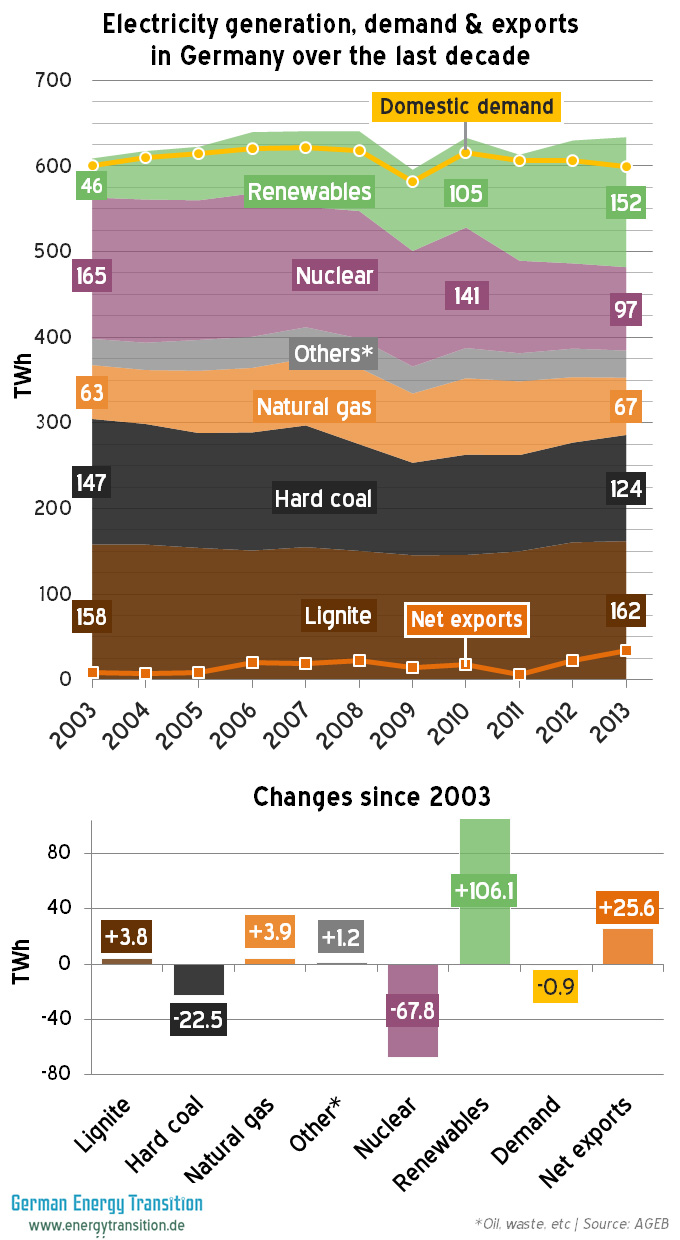 This claim is based on a previous paper published by the IER itself (PDF). But as we demonstrate in our study German Coal Conundrum, the growth of renewables since 2011 has already outstripped the reduction in nuclear. And as regular readers of this blog know, demand from foreign countries for German power (the main two being the Netherlands and France in 2013) directly increases the residual load served by conventional plants; specifically, if we zero-out Germany’s record level of net exports in 2013, coal power and carbon emissions drop by around 2.5 percent. If anything, foreign countries have turned to German coal power at a record level; Germany does not need so much electricity from coal to meet its own demand.

We shouldn’t stop counting at the end of 2013, either. The roundup of changes by TWh in the first half of 2014 is in the chart below. Get ready for reports of Germany lowering its emissions this year. 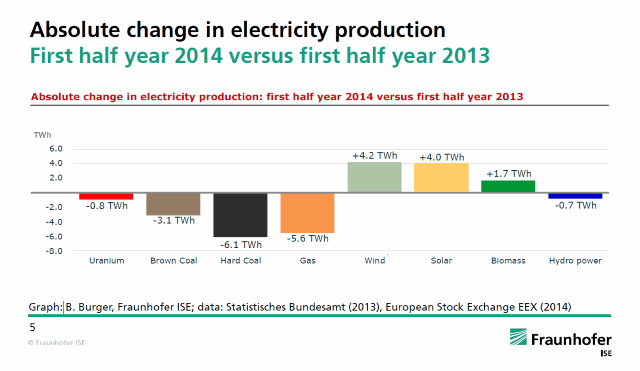 Leaving carbon in the ground

Finally, does anyone at the IER take the term “unburnable carbon” seriously? Numerous organizations not accused of being green, such as the IEA, now say that we need to leave at least two thirds of the currently proven fossil reserves in the ground. Were Germany to start producing shale gas, it would only add to the amount of carbon that needs to be left in the ground.

The IER says Germany rejects shale gas “despite rising electricity prices,” as though domestic German shale gas would somehow magically reduce power prices. Germany has some of the largest and least expensive lignite resources in the world. Power from shale gas would not automatically replace electricity from lignite, and gas would have to be relatively inexpensive to replace power from hard coal, which is also increasingly being squeezed out of the market (see the charts above). Most likely, domestically produced shale gas would offset German gas imports without substantially changing the country’s carbon emissions.

Overall, the IER study seems intent on depicting the Energiewende in a bad light. Sentences like this one are revealing:

“In the wake of the 2011 nuclear plant closures, however, German CO2 emissions have actually risen, and Germany is now the E.U. country with the highest level of CO2 emissions (at 760 million tons in 2013), according to the E.U.’s statistics arm, Eurostat.”

Germany does not “now” have the highest CO2 emissions; it is the largest economy in the EU by far and has been the largest carbon emitter as well as far back as you could wish to go. 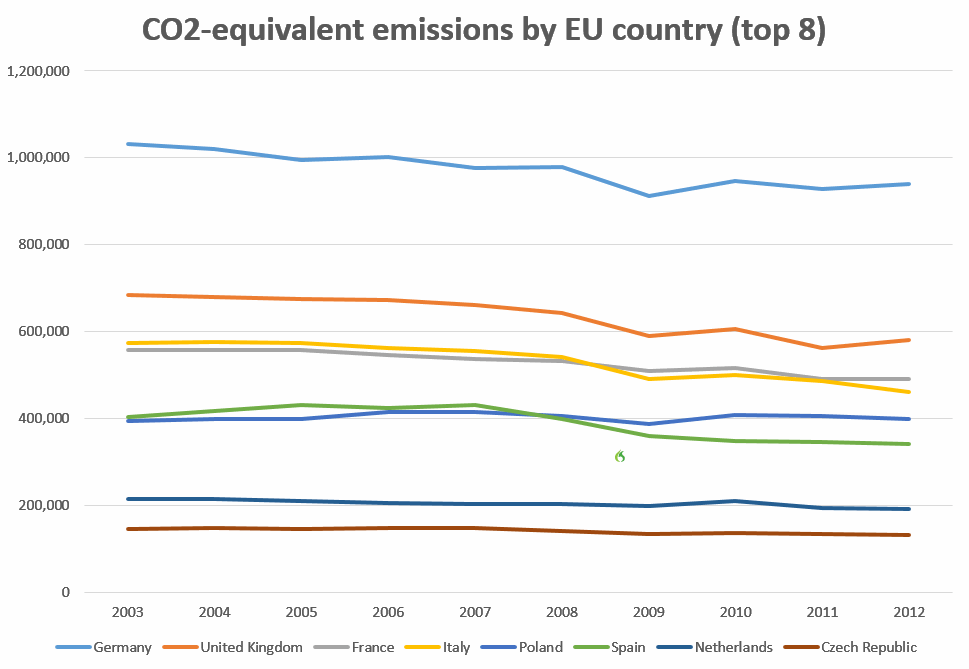 We need to remember that providing inexpensive fossil fuel is not a goal of the Energiewende. For the climate, the goal needs to be to leave as much carbon in the ground as possible, not turn more resources (shale gas) into proven reserves. But the IER seems more worried about cheap energy for industry than the climate anyway. As I recently explained, Germany’s new legislation is interpreted either as opening the floodgates (by those who wish to ban fracking altogether) or as a ban (by the business world). The IER’s interpretation comes down firmly in the second camp.

No one worries about the German economy as much as the pro-fracking, pro-nuclear camp pretends to. The German economy has never looked better since reunification, and market analysts say Germans can get ready for the Golden 20s next decade. Anyway, the IER is not really worried about climate change, carbon emissions, or the success of the Energiewende. It’s worried that Germany’s going to pull this off without shale gas or nuclear.