The EU’s member states are losing their global leadership on renewables because of hasty and contradictory policy changes. Gavin Purchas and Eric Gimon argue that the world can learn from their mistakes: Predictable support for renewable energies, which is in line with cost reductions, is key for the succesful deployment of renewable energies.

For those of you who are avid viewers of the TV show, “House,” you are probably all too familiar with Dr. House’s chaotic yet extremely effective style. He solves cases and achieves fame and notoriety, while those working with him try to learn valuable lessons along the way, hoping none of the crazy will rub off on them. So too it is with Europe and the many countries around the world looking to learn a thing or two from its experience with implementing one of the most aggressive set of renewable energy targets in the world.

The European Union’s (EU) attitude towards renewable energy started out as a rational set of targets followed by supporting financial mechanisms, but has ended up as a chaotic series of missteps that have resulted in the region losing its number one spot as the world’s clean energy leader. For countries following the EU (House’s team and colleagues in this metaphor) the message is simple: Do what we did in the beginning and not what we’re doing now…or else you’ll end up losing your license.

The recent decision by the EU Commission to phase out support for renewable energy technologies by 2017 is the latest in a series of missteps across the continent that have led to decreased investment and fewer renewable energy generator installations.

The first steps were triggered by the need for austerity measures, which led to the retrospective rollback of renewable support in countries like Spain, and decreased financial support in countries like Italy and Germany. As a result, in 2013 Germany saw a 57 percent reduction in solar installations compared to 2012, while Italy saw a decline of 70 percent, resulting in the countries losing their first and second spots (respectively) to China and Japan in the global rankings for solar photovoltaic (PV) installations.

The story for wind is similar, with installations decreasing by eight percent across the EU as a whole. Germany and the UK make up the bulk of all new installations in Europe at 42 percent, while other countries with previously healthy markets such as Spain, Italy, and France have seen their rate of wind energy installations decrease by 84, 65, and 24 percent respectively. This hit to the clean energy economy has been at a great loss to jobs in the renewables sector and the families they support.

Yet it is not all bad news. While both investment and installations are down, renewable energy installations made up 72 percent of all new generation projects in 2013 (up from 70 percent in 2012). 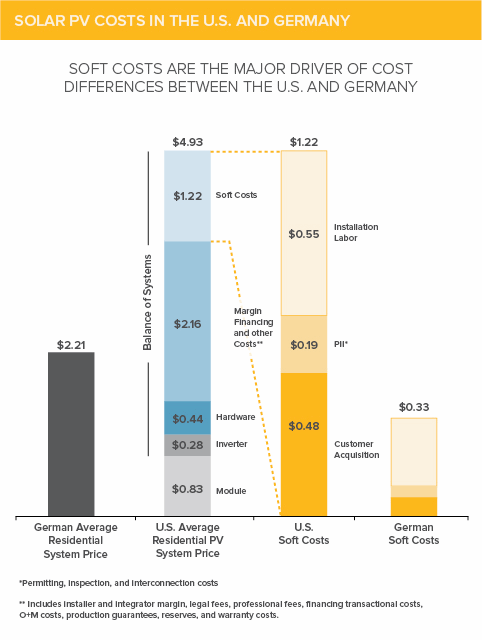 Furthermore, the level of support that has been provided over the last ten years by EU renewable energy policies has allowed European countries, especially Germany, to enjoy much lower installed costs for solar PV. In fact, the total cost of solar PV sits at $2.21/watt in Germany compared to $4.22/watt in the U.S. A recent report by the Rocky Mountain Institute entitled, “Reducing Solar PV Soft Costs: Focus on Installation Labor,” reveals that a significant part of the difference between what Germany is paying for solar versus what the U.S. is paying, is that the U.S. shells out $1.22/watt for installation and other ‘soft costs’ like customer acquisition, compared to $0.33 in Germany. Essentially Germany has gotten a lot better at getting customers interested in taking up solar and a lot more efficient at installing the units.

So what’s the lesson? Firstly, robust and predictable support for renewable energy policies have helped to bring down the cost of solar PV in the EU to half that of the US, resulting in a greater number of installations, a far higher capacity base, and a much larger and more vibrant clean energy economy. Had the member states and Commission stayed the course, faster cost reductions could have been achieved and the fall in investment and installations could have been avoided. However, by making the markets more volatile, the EU has succeeded in surrendering their global, clean energy leadership role to China and Japan.

If the U.S. is to learn a lesson from this experience, it is not that renewable policies are ready to be removed, but rather that they need to be maintained, and as the market evolves to favor renewables, scaled down in a way that is predictable to investors and in line with technology cost reductions.

To quote Dr. House, “Mistakes are as serious as the results they cause!” The EU is making a big mistake in scaling back support for renewables and the results are already being seen. The rest of the world should not follow.

This post by Gavin Purchas, Policy Director for Clean Energy at Environmental Defense Fund, and Eric Gimon, Philanthropist, was first published on EDF’s Energy Exchange blog and is reposted with permission.