The Guardian reported this month on an energy-saving approach to construction. Craig Morris says that, in attempting to present “both sides” of the story, the journalist misses the point.

By 2020, new builds in the EU are to be nearly zero-energy buildings, with the focus primarily on reducing demand for heating and cooling; efficient appliances technically fall under the category of EcoDesign, not architecture.

The target may sound challenging, but those of us following the issue in fact wonder why we are moving so slowly. A handful of new neighborhoods have gone up in Germany, Switzerland, and Austria over the past few decades, demonstrating that this type of architecture works in everything from single-family homes to residential complexes, schools, office buildings, and even indoor swimming pools. What’s more, Passive House involves no extra costs when properly designed.

The Guardian journalist mainly seems to have two problems with Passive House: the looks and the “checkboxes.” In both cases, he seems to have been acting upon the misconceived notion that a journalist must find both sides of the story – the cloud to every silver lining. In reality, journalists should present matters accurately, not find someone who disagrees with the facts (think of the damage this “both sides” approach has done to press coverage of climate change).

The journalist says that Passive House “sometimes look[s] like a facility for pacifying particularly violent criminals” and later says that the first Passive House suburb built in 1991 looks “a little like a portable classroom block, a clunky aesthetic.” In fact, Passive House buildings are generally indistinguishable from other new builds, as this database of projects around the world illustrates. 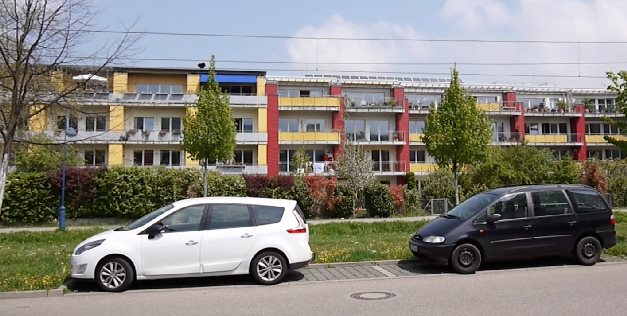 This long residential complex in Freiburg, Germany, is actually two separate buildings. Which one do you think is Passive House? The red one on the right side with the solar panels on top, or the yellow left half? If you can’t tell the difference, join the club. (Answer: the Passive House section is the yellow part on the left.)

The reason why Passive House buildings look no different to the untrained eye is because, contrary to what the journalist seems to think, there is no one way to do Passive House. Such buildings can be solid masonry, prefab concrete, lightweight A-frames, and even straw bales (PDF).

Which makes the second contention in the Guardian article all the more curious; it calls Passive House certification “a distracting box-ticking exercise.” The journalist even finds an architect who calls this ultimately flexible type of architecture “a one-size-fits-all approach.” In reality, the architect is more accurately describing LEED, the certification process originating from the US. It indeed consists of pages of checkboxes, and depending on how your project performs, you can get various levels of certification (gold, silver, etc.).

There is only one checkbox for Passive House: the target of 15 kilowatt-hours of heating/cooling energy per year for each square meter of floor space. For a home with 1,000 square feet, we are essentially talking about the equivalent of 150 liters of heating oil, roughly 40 gallons of oil. The average home in climates similar to Germany’s (such as New England) consumes 5 to 10 times more.