A few weeks before the German parliamentary elections, a consumer advocacy group has published a survey of public opinion on the country’s energy transition. The findings are clear: Germans support the goals of the Energiewende. Nonetheless, Craig Morris has some nits to pick with the poll’s questions.

Protests like this one in Berlin for the democratization of grid and electricity production show that most citizens agree with the goals of the Energiewende – but want to be taken seriously and involved as actors. (Photo by Uwe Hiksch, CC BY-NC-SA 2.0)

If you have read about the impact of the energy transition on ordinary Germany citizens, you might expect Germans to be ready to throw in the towel. But as German consumer advocacy group Verbraucherzentrale found in a poll, 82 percent of Germans believe the goals are “absolutely right” (43%) or at least “more right than wrong” (39%).

When it comes to implementation, however, there is more skepticism, with 48 percent saying things are “not generally being done right” (35%) or “not being done right at all” (13%), compared to only 40 percent who believe things being done “generally right” (37%) or “completely right” (3%).

Crucially, 55 percent of those surveyed believe that distributed renewables is the way to go, compared to 32 percent for centralized renewables. Nonetheless, the survey revealed that Germans citizens generally believe that politicians, industry, and utilities have the biggest say in the transition, with citizens having the least input. 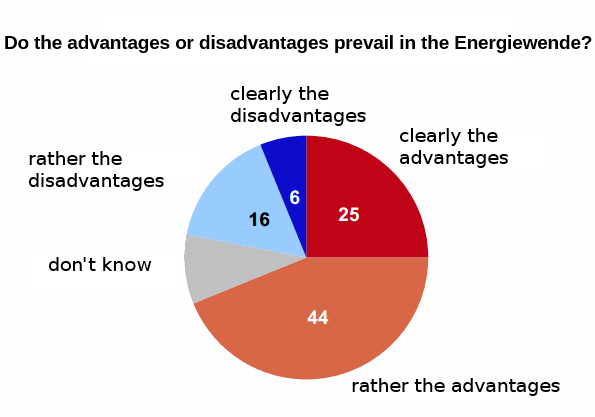 69% of Germans say the benefits of the energy transition outweigh the drawbacks. (Graph by VZBV)

As the long version of the study shows (PDF in German, and there is also a short PDF version), 93% of Germans have heard the term “Energiewende”, and there were no sociodemographic differences in the responses (no particular aspect, such as education, age or gender, made a significant difference). The biggest differences were found between those who had invested in PV and those who had not (yet); the former tended to feel that things were not going fast enough.

The main benefit mentioned was “general environmental and climate protection” (38%) ahead of “greater safety from nuclear phase-out” at 23 percent. By far the biggest drawback mentioned was “rising energy prices” at 52 percent — a clear indication hat the survey’s questions are not completely based on facts. You see, lower energy prices (such as shale gas) are not a goal of the energy transition; in fact, the energy transition is designed to reduce consumption of fossil fuels as they become more expensive – not to make them less expensive. Here, the survey probably simply confuses electricity and energy.

Elsewhere, the survey also found that 62 percent of Germans believe industry should not be largely exempt from the renewables surcharge, while only 28 percent said there should be some exemptions. Here, the question is revealing but unrealistic; no political party with a chance to form a coalition government supports a complete annulment of these exemptions.

For instance, Green politician Oliver Krischer published his ten talking points this month (PDF in German), and the second one is “reducing exemptions to cases of hardship” – not getting rid of exemptions altogether. Keep in mind that the original exemptions were the brainchild of the Social Democrats and Greens, who now make up the opposition. The main thing debated now is where to draw the line between firms that can go abroad to find lower power (not energy!) prices and those who cannot.

Despite these shortcomings, the poll provides a useful glimpse into what the German public thinks about the Energiewende. The Germans turn out to be well informed and committed to the transition. And people still want to do it for themselves – not leave it up to utilities.

Craig Morris (@PPchef) is the lead author of German Energy Transition. He directs Petite Planète and is writes every workday for Renewables International.