Germany has an “energy-only” power market, meaning that all payments are based on the kilowatt-hour. If a plant does not run much, it earns less – and gas turbines are suffering the most. But as Craig Morris points out, Germany is a bit of an exception within the EU – for how much longer?

To integrate renewables into energy markets, more dispatchable capacity is needed. Capacity markets are one way to incentivize the availability of capacity. (Photo by WeiterWinkel, CC BY-NC 2.0)

As I wrote in a recent post, the growth of wind and solar power are pushing into the medium load and increasingly into the baseload, meaning that gas turbines are already largely offset, with coal and nuclear plants coming up next. This capacity will therefore be used less and less, thereby becoming less profitable – yet, the need for dispatchable capacity in Germany remains unchanged.

The situation is similar in many countries. In France, E.ON has announced plans to close a gigawatt of coal-fired capacity, and GDF Suez aims to mothball three of its gas turbines in the country. In Germany, E.ON has agreed to keep its gas turbine in Irsching on standby for the next three years because the facility only ran for 2,000 hours instead of the 4,000 needed for it to be profitable. But Norway’s Statkraft is nonetheless closing its 510 MW gas turbine in Landesbergen. And in Berlin, a 300 MW gas plant is admittedly being built by Spain’s Iberdrola, but it will replace an old plant with greater capacity (450 MW).

One proposed solution is capacity markets, and they come in different flavors. The policy is already quite widely used across the EU, as the map below shows. Germany is one of the few countries that is still completely energy-only. 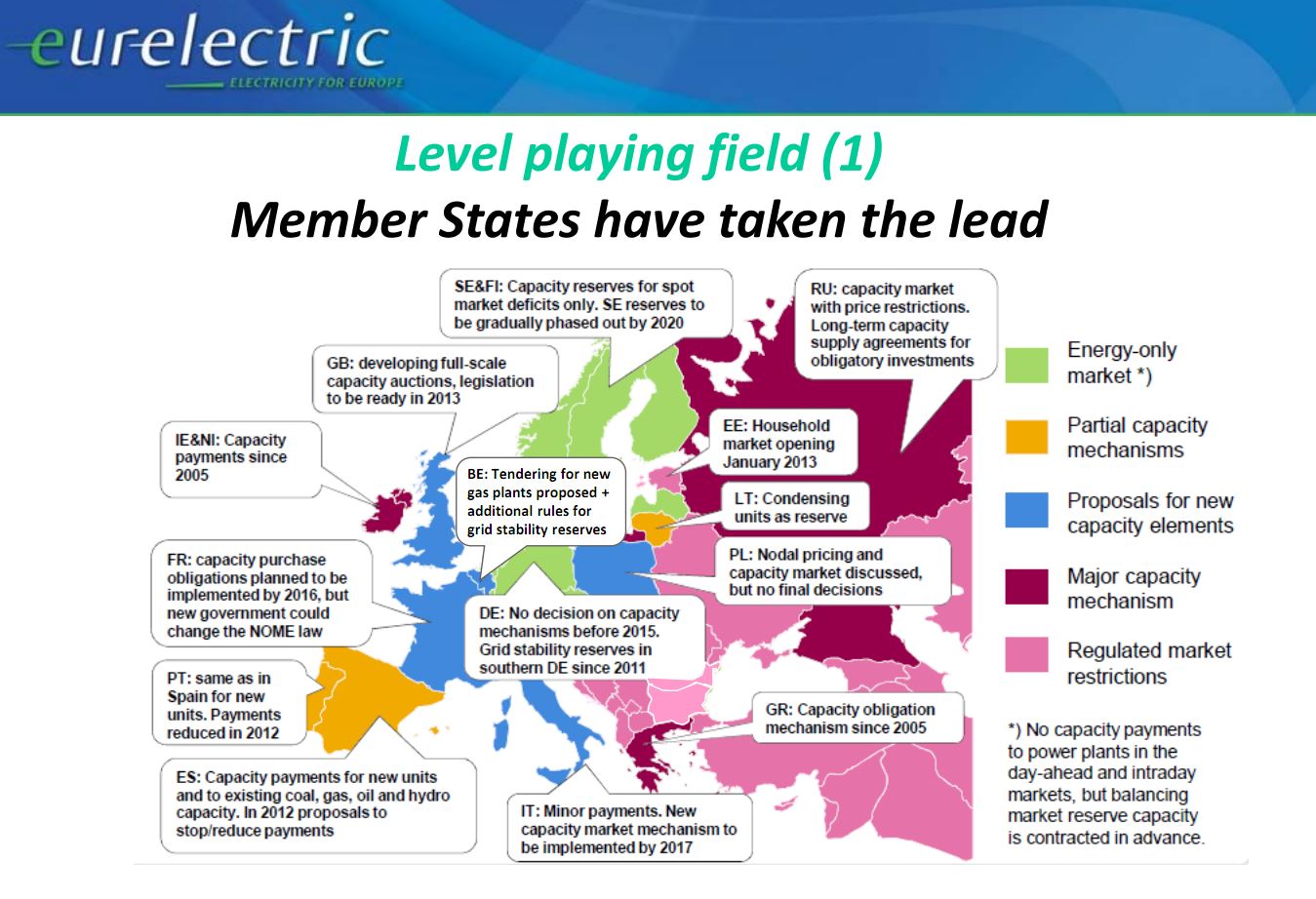 The map comes from a presentation given at a stakeholder forum on March 8, 2013 on a single market for gas & electricity within the EU. The consultation period had already elapsed, but as Brussels-based consultant Alice Stollmeyer told me, “the European Commission is expected to set out a framework for capacity mechanisms in July and to set the way forward for coordinated generation adequacy assessments in Q3/Q4.”

Ireland probably has the most far-reaching capacity payments. There, all power generators participate (see this overview PDF and this one from the utility regulator in Northern Ireland as a PPT). These capacity payments are designed to cover all fixed costs and provide a profit for the most efficient “peaking plant,” which does not run unless power demand peaks. This policy was only implemented in the Republic of Ireland and Northern Ireland a few years ago, but the Spanish market has had capacity payments since 1997. They also originally applied to all installed capacity, but eligibility for nuclear was later done away with.

It makes sense not to include nuclear because these plants are ramped down the least (if at all), meaning that an installed kilowatt of nuclear capacity generally translates into a high number of kilowatt-hours. Nonetheless, France is considering implementing a capacity market itself in 2016 (PDF in English from French electricity regulator RTE). The question will therefore be whether French nuclear plants, which are already running at full capacity, will also be eligible for capacity payments.

In my next post, we will take a look at some proposals within Germany.