Paul Hockenos recently attended a conference on the European perspective of the German Energiewende organised by the Heinrich Böll Foundation in Berlin. His report shows that distrust remains a common sentiment of German neighbors and that better coordination and communication is needed. 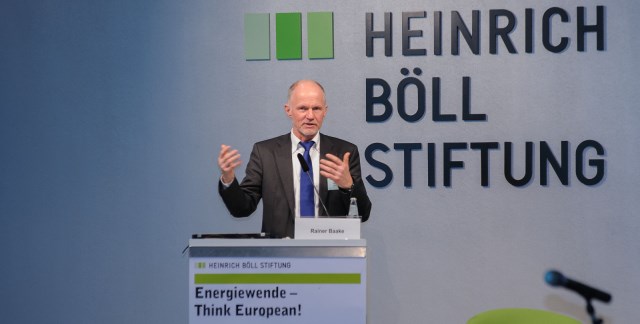 Living in Germany, one might understandably have a skewed impression of what the rest of Europe thinks about Germany’s epic Energiewende, or clean energy transition. After all, all of the EU member states are committed to cutting carbon emissions and introducing renewables into their energy mixes. And Germany has taken the lead. So you’d think everybody’s watching the great Teutonic clean-energy pioneer in awe and wonderment, ready to jump on the bandwagon themselves, right?

Well, think again. As became clear very quickly at the Heinrich Böll Foundation’s two-day conference entitled “Energiewende – Think European!” in Berlin in April, there’s a lot of skepticism about and even deep-seated resentment toward Germany’s energy policies. Poles and the French, Czechs and Brits, in fact most of the EU27, are not on the same page as Germany and its small band of cohorts, including Austria and some Scandinavians. This fact has enormous implications for Germany’s policies, something that the Germans are in the process coming to grips with and incorporating into their modus operandi.

The conference was studded with energy experts from across the continent, both enthusiasts and detractors of the Energiewende. And the latter didn’t wait for long to take the gloves off. In France, argued Cécile Maisonneuve, Director of the Center for Energy of the Institut Français des Relations Internationales, there remains a sound consensus on the necessity of maintaining nuclear power, even if the Hollande government has pledged to reduce its dominance. There’s not a national debate on energy issues, she says, and the government’s election promises to modify France’s energy mix have so far gone nowhere. The French remain convinced that nuclear is the way to meet the EU’s carbon emissions targets and cut fossil fuels bills, even though they’re watching the Energiewende with curiosity and interest. French policymakers though, she said, resent the fact that Germany is “going it alone” rather than working together with its EU partners. “We have to cooperate in the EU context,” she said: “If it goes on like this there will be a total mess in Europe that will jeopardize your Energiewende and ours.”

This, though, was mild compared to what Olaf Osica of Warsaw’s Center for Eastern Studies had to say. Poland, the Czech Republic and most of the other Central Europeans see Germany’s energy policies as “very ideological” and “moralizing,” he said, and based on an overreaction to the Fukushima disaster in spring 2011. That is when Chancellor Merkel panicked and abruptly struck out on her own path, he said, which the Germans hadn’t begun to think through in terms of its implications for either Germany or for its neighbors. Osica underscored the “loop flows” of German renewable energy that swamp both Poland’s and the Czech Republic’s grids on sunny and windy days. This phenomenon (Germany electricity flows pass through both countries on their way from north to south) pushes their grids to the brink of collapse and costs Poland 50 million euros a year. “That’s our contribution to the German Energiewende,” he said sarcastically. Poland doesn’t share Germany’s angst about nuclear – it’s safe and clean, Osica said – and Poland is contemplating building its own reactors. (It presently has none.) It’s not that Poland isn’t ‘green,’ said Osica, but it’s going to do things its own way and maybe even pick up upon some of Germany’s best practices at a later point.

Even though there was plenty of German reaction to these charges (stressing, for example, the fact that the Energiewende has been underway at the very least since 2000), the Germans were on the defensive. This anti-Energiewende sentiment was an indication of what several panelists in the course of the conference referred to as a Europe-wide “backlash” against a pro-active, German-style push for a future based on non-nuclear renewables. If there had been any doubt that this was the case, the conference dispelled those doubts.

Much of the discussion that followed, both on the stage and during the breaks, was about the proper role of the EU in coordinating and guiding European energy policy. Of course, according to the Lisbon Treaty energy policy is a matter for the member states. But the EU does have a say about renewable energy, climate protection, the internal energy market, energy efficiency, and other issues that impact directly on national energy policies. There are EU-inspired national action plans, an energy road map for 2050, 20-20-20 targets for 2020, an EU emissions trading system (EU ETS), and other measures. Not to paint too black a picture, these initiatives and national policies have led to an increase in renewables across the EU 27.

But what about the future? Interestingly, it was the Energiewende-doubters who were in favor of greater EU coordination — in order to reign in Germany. Some of the Germans, on the other hand, expressed their wariness about common EU policies that might dilute their Energiewende. Rainer Baake of Agora Energiewende, for instance, said that as long as there are such divergent energy policies in the EU and no chance of coming to a common position, Germany is best off pursuing bilateral and trilateral deals with neighbor states, like Poland and the Czech Republic. Germany’s representative from the environment ministry struck a similar note, saying explicitly that Germany didn’t want to jeopardize the feed-in tariff or expansion of renewables by going for EU-level common policies. At the moment, he said, Germany would lose. Better to forge on with like-minded member states and show the rest that they are indeed on the right track. In time, the others will come around.

What everybody might possibly agree upon – the lowest common denominator – was the “no regrets” long-term 2030 policy framework meant to replace the current framework that expires in 2020. The “no regrets” option calls for smart and flexible infrastructure and increased energy efficiency, in addition to a substantially higher share of renewable energy in EU gross final energy consumption beyond 2020. There was more disagreement about whether or not the targets for 2030 should be binding and whether there should be any renewables target at all, or just carbon reduction targets that every country could pursue as it wished. There were also a few entirely justified snide remarks about the fact that it is Germany that is holding up the current efficiency legislation on the EU level (thanks to Mr. Rösler and the Economics Ministry) as well as improvements to make the ETS work, also undermined by the same faction.