American Ozzie Zehner is looking for “alternatives to alternative energy.” Craig Morris agrees with practically everything he says but nonetheless feels that Zehner’s approach is self-serving. Orgs in the US all protect their own industries. Who is left to call for a true energy transition?

The neighborhood of Vauban in Freiburg is a good example for the pervasiveness of environmentalism in Germany. (Photo by s4tomorrow, CC BY-NC 2.0)

Back in 2004, when I was finishing up my German book Zukunftsenergien, a couple of (then) relatively unknown… well, environmentalists, wrote a paper entitled “The death of environmentalism.” They said a few interesting things, but also had little to say about Germany, which was emerging as a leader in renewables at the time. I thought their title was a good trick to get attention – but one that could divide a community that needs to stick together.

Germans would agree with Zehner that consumerism is a problem. By 2050, they aim to reduce total energy consumption by 40 percent – and even then, they will not be 100 percent renewable.

Less than a decade later, Ozzie Zehner is looking for “alternatives to alternative energy.” He has made the press not only in English (“Clean energy’s dirty secrets“), but also in French (“photovoltaics is not that fantastic”) and German (“the solar fairytale”). The media love that angle. He tells of a homebuilder who insisted that two wonderful oak trees be cut down so that his new solar roof would not be shaded. Zehner concludes from the experience that too many people are infatuated with solar. 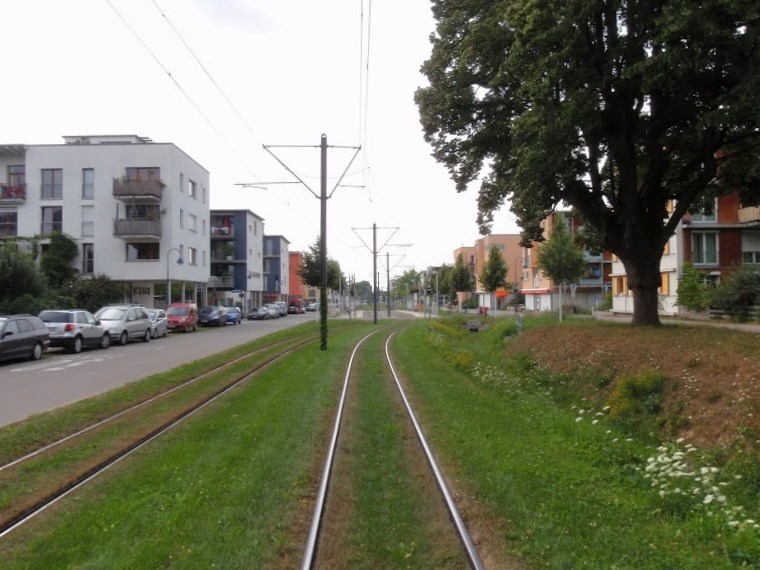 A view of Freiburg’s Vauban neighborhood, known for its Plus Energy homes, with a decade-old tree on the right. When the neighborhood was developed in the 1990s, none of these historic trees was felled. In Germany, homeowners generally have to get permission from the city before cutting down a tree even in their yard – and the city can turn down the request if the reason is not good. Nonetheless, Germany is a leader in Passive House architecture and solar.

Here, Zehner takes an obviously silly exception in order to divide and conquer – and like the authors of “Death of environmentalism” (and proponents of insulation over photovoltaics), he rebuts claims Germans do not make. He says solar is not what it’s cracked up to be, but who’s doing the cracking? Not the Germans.

Zehner proposes other quite sensible things, such as more cycling and less consumption overall. Germans jibe with all three.

By playing off one thing against the other, you worsen the debate. Laypeople leave with the wrong impression: “see, solar / wind / biomass / whatever isn’t the solution after all.” Of course not – they’re a part of the solution. The solution is a mix of renewables with much lower consumption.

Germans may be leaders in photovoltaics, but they also invented the Passive House concept; nobody insulates better than the Germans (though the Swiss, Austrians, and others do it just as well). And Germany has roughly as much installed wind power capacity as it does solar.

Wanna talk consumerism? Germany is a leader in recycling and a net importer of waste. Cycling? Okay, we’re gonna give that one to the Netherlands and Denmark – but Germany is not far behind.

While some of the brightest young minds in the US boost their careers with headline-grabbing divisive claims, the German renewables community is united and thinks holistically. German wind power association BWE publishes a monthly magazine called “New Energy,” which focuses on whatever is needed, not just wind. Can you imagine AWEA or SEPA regularly writing about the benefits of biomass as the BWE does?

Founded in the 1970s, Germany’s oldest magazine for renewables has a title – Sonne, Wind & Wärme – that can be translated as “solar, wind & heat.” Can you name a single magazine in the US for all renewables? I can only think of British-born Renewable Energy World, which PennWell took over a few years ago. Germany has two, and those are just the big ones.

Germany also has two organizations that represent the renewables sector as a whole: the AEE and the BEE. Their offices are around the corner from each other in Berlin, and they are on friendly terms. Can you name a single nonprofit in the US for all renewables? Maybe it’s time for one – to end the divisiveness. We could start by building up the Renewables100 project.