Is Germany not simply switching off its own nuclear plants in order to import nuclear power from its neighbors? It turns out that nuclear plants in neighboring countries have always run at full capacity and simply cannot be ramped up any further to sell more to Germany. Craig Morris discusses the recent findings of a report by the German Institute for Applied Ecology (Oeko-Institute).

The Fessenheim Nuclear Power Plant on the French side of the Rhine on the Franco-German border. (Photo by Florival fr, CC BY SA 3.0)

Indeed, not much seems to have happened in terms of nuclear power imports even in the week of the nuclear phaseout; France’s nuclear plants were basically running full blast all the time as usual. The researchers of the study say that the main change was in the volume of power trading, with more power being imported and exported overall after the nuclear phaseout of March 2011. At times of peak demand, Germany continued to commercially export power to France, whereas France exported to Germany at times of lower demand.

Likewise, “there was no visible response to the German shut down by additional imports from the Czech Republic.” The researchers also confirmed that nuclear plants are essentially “producing as much power as possible” the whole time, with other power sources ramping up when demand exceeds possible nuclear power production. 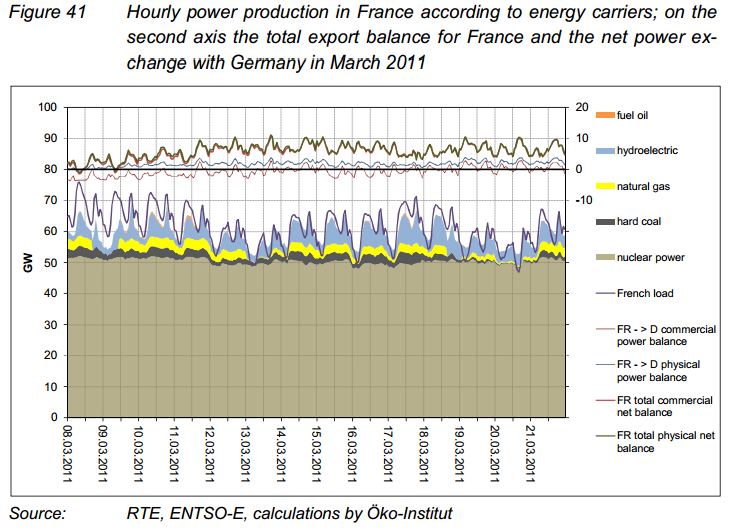 It is hard to tell from this chart of French power production which day Germany switched off eight of its 17 nuclear reactors on. Tipp: the nuclear disaster at Fukushima occurred on March 11. 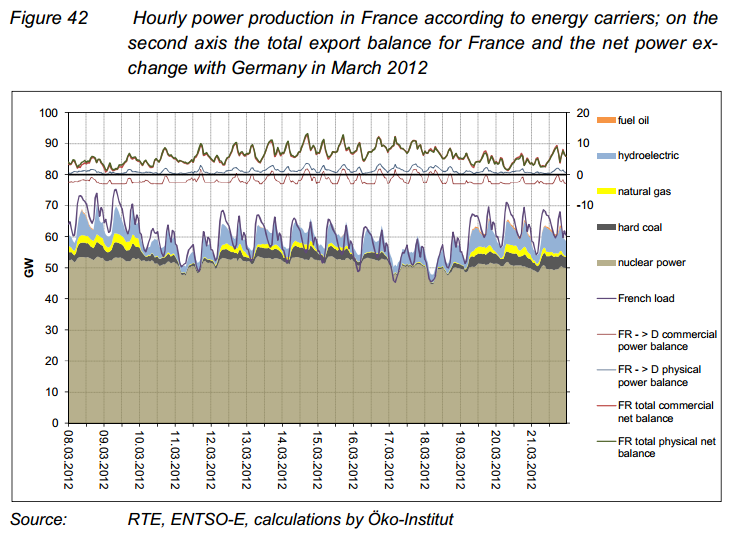 A year later, French nuclear power production is down if anything during the same timeframe.

Nonetheless, Germany and France almost seemed to be good complements to each other – quite an ironic outcome in light of the two countries’ different approaches to the power sector, with France banking heavily on nuclear for three quarters of its power supply, while Germany resorts to a broad mix of sources. But as the authors put it, “France in particular appears as a flexible trading partner” for Germany.

So France uses the German grid to export power to Switzerland and, to a lesser extent, to Italy, but German grid operators get paid. Furthermore, international power trading is based on price, not any scarcity of electricity; power is bought and sold not primarily to prevent blackouts, but to save a euro.

Finally, for power trading to be made more equitable between Germany, Poland, and the Czech Republic, the market needs to be redesigned. Surges of renewable power production are not the problem. In an upcoming interview with one of the authors, we will talk about what that redesign could look like.