Everyone understandably looks towards the future to see how Germany will manage to increase the share of renewables in its power supply, but occasionally it’s worth taking a look back to see how far we have come – far, far further than both critics and supporters expected. Craig Morris takes a look.

Germany faces quite a challenge as it attempts to get 35 percent of its electricity from renewables by 2020 – an increase of more than 1.5 percentage points per year on the average. On the other hand, Germany has blown past a slew of its targets for renewables in recent years, meeting the 2010 target for wind power in 2005 – and surpassing the already ambitious emissions reduction target of 21 percent in the Kyoto Protocol four years before the deadline in 2012.

Renewables actually grew faster (“Reale Entwicklung”) than forecast in ten scientific studies – all of which, it is safe to say, could be considered friendly to renewables. Conservative studies had renewables growing even less. 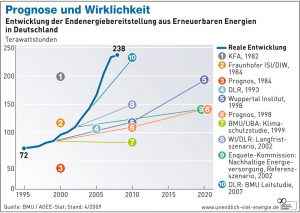 The chart below reflects renewables as a source of “final energy” (see our glossary for the distinction between gross and final energy), so we’re not just talking about electricity here. Incidentally, the figure for 2011 was apparently just over 300 terawatt-hours, more than 25 percent above the forecast for 2010 in the chart below.

As we explained in our history section, Germany got started with renewables in the early 1990s mainly because Helmut Kohl’s coalition did not think a little law promoting distributed renewables would bother anyone. An old poster (below) published by German utilities in 1993 shows the thinking.

The highlighted bit reads, “Renewables – such as solar, hydro, and wind – cannot make up more than four percent of our power supply even in the long term.” It must be kept in mind that renewables already made up around three percent of German power supply at the time, most of which was hydropower. Clearly, the conventional energy sector in Germany expected solar and wind to go absolutely nowhere, and biomass was not even worth mentioning.

But another statement in the poster caught my eye: “Can Germany phase out nuclear? Yes. But the result would be a tremendous increase in coal consumption – and hence, greater carbon emissions.” Over the past two years, coal consumption has indeed increased – whether greatly or slightly is a matter of interpretation – so the challenge is still remains. Can Germany phase out nuclear and switch to renewables without increasing its carbon emissions?

And despite surpassing so many of its targets, Germany still only got 12 percent of its final energy from renewables in 2011. As our colleague, German researcher Volker Quaschning, recently pointed out (in German) that still leaves 88 percent. The figure of 22 percent renewable electricity is more impressive, of course, but it also leads to the criticism that the German energy transition is merely an electricity transition.