Feed-in tariffs are often referred to as a startup mechanism for a fledgling technology (renewables), and it is assumed that they will be done away with at some point. Craig Morris wonders why the nuclear sector now needs them after 50 years of subsidies. 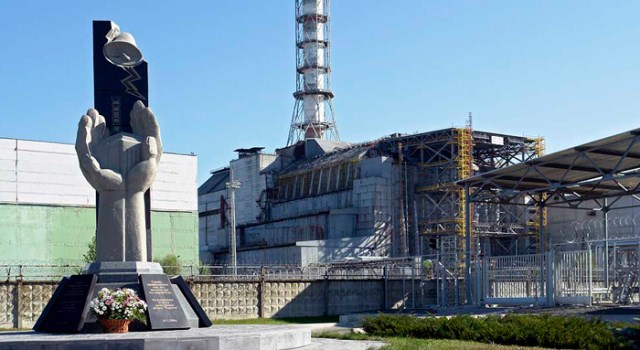 The Chernobyl Memorial in front of the reactor ruins. Only a few weeks ago, the provisional container above the reactor collapsed.

We generally think of large power providers as big proponents of nuclear, but the first power firms to build nuclear plants in the West were not exactly thrilled about nuclear in the beginning. They had no experience with the technology and understandably insisted that the government, which was asking for the plants, should bear the risks. Mark Hertsgaard describes the history of nuclear in the US well in Nuclear Inc., but it was no different in Germany.

Today, firms in the UK are asking for the kind of price guarantees for new nuclear plants that are granted to renewables, although wind and solar are just getting off the ground and nuclear has been subsidized for half a century. The upper limit (meaning that even higher figures are apparently being tossed around) of 100 pounds per MWh is equivalent to around 0.116 euros per kilowatt-hour, roughly in line with the lowest feed-in tariffs for solar in Germany (which continue to plummet by 2.5 percent each month) but roughly a third above even the highest rates for onshore wind in the country.

Aside from price, one major aspect of feed-in tariffs for renewables is the long term of contracts, generally for 20 years in Germany. Last month, Electricité de France (EDF) said it wanted subsidy guarantees for a term of 40 years to build new nuclear plants in the UK. The only aspect of FITs that new nuclear has apparently not ask for yet is priority on the grid; in Germany, conventional power (including nuclear) has to ramp down before renewable power is lost.

Feed-in tariffs are generally calculated to provide a return of 5-7 percent on investments. EDF is currently asking for a 10 percent return for new nuclear in the UK.

German energy giant Eon backed away from its last nuclear project abroad (in Finland) last month. RWE, the other big German player, backed away from nuclear globally last year under its new CEO. EnBW, the third of Germany’s Big Four, is now owned by the state of Baden-Württemberg – which has Germany’s first Green state governor. The fourth big utility is Sweden’s Vattenfall, which means “waterfall” in Swedish. The company keeps its clean image at home funded with revenue from dirty brown coal in Germany.

Americans now force their utilities to build renewables by imposing targets under Renewable Portfolio Standards, but the German approach is a bit different. German law forces utilities to buy renewable power if they don’t want to build it themselves. Germany’s big utilities have seen the light from; the new market reality is a threat to their bottom line.

When the peaceful use of nuclear fission got started half a century ago, power firms had to be forced to build nuclear plants. They have since embraced nuclear and are now forced to build renewables. Will the next step for them be embracing renewables?