Heralded as a “courageous step for climate protection,” Germany’s government has in 2022 reached a compromise with RWE, Europe’s most polluting energy firm, to stop mining and burning its filthy brown coal by 2030 – a full eight years ahead of previous plans. But the deal, negotiated by several Green-Party led ministries, also authorizes RWE to keep several units at one of the world’s most toxic power plants to stay longer on the grid, at least through 2025, instead of closing at year’s end. And despite cheers that the new agreement will keep 280 million tonnes of carbon in the ground, scientists fear the heaps of lignite now set to be burned will prevent Germany from meeting emissions limits set under the 2015 Paris Climate Agreement. Lead blogger and podcaster Michael Buchsbaum reviews the controversial decision. 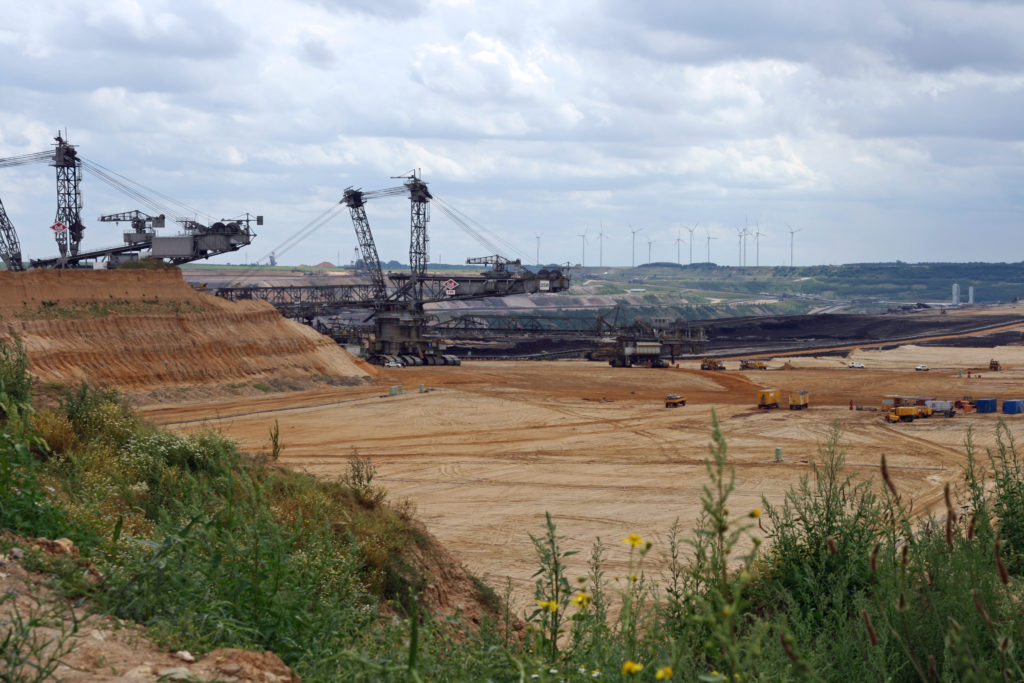 Open pit mine Garzweiler. (Photo by Bert Kaufmann, CC BY 2.0)

At an October news conference, Robert Habeck announced that his Federal Ministry for Economic Affairs and Climate Action (BMWK) in concert with the German state of North Rhine-Westphalia’s Economics, Industry, Climate Protection and Energy Ministry had struck a deal with RWE, one of Germany’s biggest power producers, to shut down all its lignite-fired power plants as well as end extraction at its huge open pit mines by 2030, bringing their planned coal exit forward by eight years in North Rhine-Westphalia.

The arrangement, however, came at a steep price as Germany struggled to boost energy supplies ahead of winter in order to stave off feared blackouts or prevent energy rationing due to sanctioned and embargoed Russian fossil gas and coal. Beyond extending the run times of its three remaining nuclear plants, it is also bringing many coal plants back to the grid.

“Putin’s war of aggression is forcing us to temporarily make greater use of lignite so that we save gas in electricity generation. This is painful but necessary in view of the gas shortage,” explained Habeck in what must have been a bitter pill to swallow for the Green party Vice Chancellor.

Under the terms of the deal, RWE will now continue to operate two lignite-fired units at its huge Neurath power plant west of Cologne that had previously been scheduled to come offline at the end of 2022 through March of 2024.

Blocks D and E, with a combined 1.2 GW capacity, will join Neurath’s 50-year old A block, that was also supposed to have its plug pulled back in April.

Prior to Russia’s invasion of Ukraine and the ensuing energy crisis, three of Neurath’s units were supposed to retire in 2022, with a fourth scheduled for 2023.

Now none will be going offline.

Additionally, as RWE’s three coal-fired power stations are phased-out through 2030, the deal clears the way for the construction of 3 GW of new fossil gas-fired power capacity — ostensibly “hydrogen ready” — at its lignite plant sites.

At the deal’s press conference, RWE Chief Executive Officer Markus Krebber and Ministers Habeck and Neubaur highlighted the point that the decision prevents “roughly” half the amount of coal otherwise set to be produced from the adjacent Garzweiler mine from actually being extracted.

Though RWE is seemingly willing to douse its coal fires once and for all, this symbolic victory may come at too great of a physical cost.

According to an analysis by independent energy think tank Ember published in April, the 4.2 GW Neurath power plant, beyond being the biggest in Germany, also holds the distinction of being the second worst polluting station in all of Europe.

RWE’s nearby Niederaußem and Weisweiler plants, fed by the same lignite extracted from the Garzweiler and Hambach mines, take up third and seventh places on their list, respectively.

According to a study by Greenpeace and the University of Stuttgart, due to the poor quality of coal they are burning, these plants are almost twice as dirty as the average German electricity mix, emitting almost one kilogram of CO2 per kilowatt hour.

In their review of the coal-exit agreement, experts at the German Institute for Economic Research (DIW Berlin) fear that it could push Germany to exceed its carbon dioxide limits agreed to under the 2015 Paris Climate Agreement.

If there is a silver lining to the deal, it is that it prevents RWE from mining through Keyenberg, Kockum and several other long-threatened towns and farms (more background here).

However “to operate the lignite fleet at high capacity during the energy crisis and at the same time to obtain sufficient material for high-quality recultivation,” RWE claims the tiny activist-occupied village of Lützerath, sitting on top of all that coal, must be destroyed.

As RWE prepares to destroy Lützerath ahead of burning the coal underneath its prime farm land next summer, contractors have begun tearing down the first of eight wind turbines slated for removal along the Garzweiler mine’s expanding perimeter.

Though the current NRW government promises that 1,000 new turbines will be built by 2026, RWE’s excavators are ensuring that at least seven less will be operating in 2023.

While Germany’s Green party heralded the “good news” over Twitter, calling the coal phase-out agreement “a done deal,” given its recent about-face on nuclear, let alone this decision to keep RWE’s toxic plants running, what’s become abundantly clear is that no timelines are secure and no turn-off agreements are irreversible.

Illustrating this point precisely is the re-opener clause RWE inserted into the deal’s fine print delineating specific dates for future governments to decide upon further delays to the said “locked in” coal phase-out.

“In order to guarantee a secure power supply in any case even after 2030, the federal government can decide by 2026 at the latest whether the last power plants will be put into security standby through 2033,” states the text.

However, if such a reserve becomes necessary, RWE promises that no change in mine planning “would be necessary”.

With that in mind, readers might forgive the many climate activists, who can’t seem to bring themselves to celebrating promises of a “locked in” end-date eight years down the road while precisely today so much climate progress is rapidly being undone.

In upcoming blogs, in addition to looking at what will be lost if Lützerath is destroyed, we will review the gains RWE’s shareholders are enjoying worldwide.