Responding to sanctions leveled on Russia following its February invasion of Ukraine, Moscow throttled deliveries of its fossil gas to the European Union. Desperate to keep the lights on, regulators and power producers returned to coal. But with Russia mining almost 70% of EU imports, burners needed other suppliers. Despite widely acknowledged human rights abuses there, in early April, German Chancellor Scholz personally called president Iván Duque to request that Colombian miners ramp up production and exports to Europe. However in elections this summer Colombians voters swept in the nation’s first ever leftist government. The second in a series on this Latin American nation, lead blogger and podcaster, Michael Buchsbaum briefly reviews its struggles with coal and the situation Gustavo Petro’s environmentally focused administration faces. 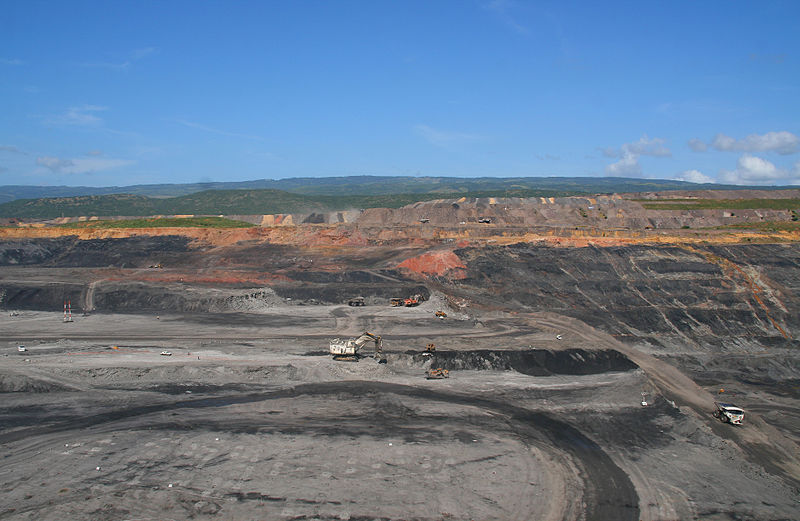 El Cerrejón mine, the largest open pit in Latin America. (Photo by Tanenhaus, CC BY 2.0)

On April 8th, the EU Member States announced they were banning Russian coal from August 2022 onwards, formally signaling to buyers that they had to look elsewhere for the majority of their supplies. This came on top of the near-panic caused by soaring prices and dwindling stocks of fossil gas, also mainly coming from Russia.

As the EU was by far the world’s largest market for Russian fossil fuels, the invasion of Ukraine and response to it has up-ended the short-term energy transition and longer-term coal-exit plans of most member states.

As gas prices skyrocketed and with alternative supplies scarcely available, Germany and several other nations reluctantly chose to bring coal-fired power plants out of retirement or into standby service, temporarily allowing them to burn more black diamonds. But from where?

Two days before the announcement of the forthcoming ban on Russian coal, on April 6 German Chancellor Olaf Scholz personally called the then President of Colombia, Iván Duque to ask if he could ensure the supply of more coal exports there – reversing recently adopted policy and, in effect, widening the scope of suffering triggered by Putin’s war.

Long decried by human rights organizations as “blood coal” given the widespread violence there against residents and environmentalists, as early as 2016, Ireland stopped buying Colombian coal. Other European buyers followed suit. German imports likewise fell from a high of over 4.7 million tons in 2017 to under 1.8 million last year, according to the German Federal Statistics Office.

“Murdered trade unionists, the expulsion of people from villages and massive ecological problems did not show a good picture of the coal companies and their German business partners,” opined the German news outlet, Kontrast.

Coal mining in Colombia is demonstrably associated with paramilitary violence, deforestation and ecological destruction, particularly coal produced from the controversial 69,000 hectare El Cerrejón mine. Owned by the Swiss Glencore Company, it is the largest open pit in Latin America.

Located in the northern department of La Guajira on the territory of the indigenous Wayuú people, since the late 1990s, they have been forced off their land, subjected to brutal intimidation, seen their rivers dried and their water fouled by mining waste.

But coal production for the last few years  – almost all of which is exported – was lower due to massive strikes, widespread blockades, COVID, and lower demand.

As they turned away from Colombian coal, German buyers bought cheaper Russian tonnage. By 2021 more than half of Germany’s hard coal imports originated there.

Now sanctioned, Russian coal imports have nosedived — and Colombian coal is starting to fill that void. Over 690,000 tons landed in Germany in March and provisional data shows that almost 2.1 million tons were received in the first half of this year alone!

The reversal in import policy is “outrageous,” says Anderson Sandoval of “Unidos por La Paz – Alemania,” an organization of Colombians living in Germany.

“I thought we were slowly getting over the toxic relationship between Germany and Colombia. Now we’ve been thrown back 20 years.”

Though South Africa, Indonesia, Australia, and the United States have all seen sharp rises in thermal coal exports to Germany this year too, Colombian shipments are up 400% over last year, according to figures collected by Trade Data Monitor.

But electricity generators there are hardly alone.

“Since the Ukraine crisis, we have received urgent requests for facilitating coal sales to Poland, and Ukraine through the World Bank,” former Energy Minister Diego Mesa related to Reuters recently. Exports to the Netherlands and Spain have also increased, he added.

The fear of necessity is also leading other nations to overlook their concerns.

“Six years ago Ireland had replaced Colombian coal with Russian coal … but at the beginning of the war they came knocking at our doors again,” continued Mesa.

Since last June, the average prices for imported Colombian coal into Germany have jumped from €95.52 per metric ton to €393.55 per ton.

With prices sky-high, the majors are cleaning up.

Glencore posted record profits of $18.9 billion in the first half of 2022, more than double last year’s totals, mostly thanks to coal. And by mid-May, Colombia’s Mining Association (ACM) was already crowing that it’s on track to haul in a record 8.8 trillion pesos ($2.2 billion) in taxes and royalties this year.

Days after Scholz’s phone call to Duque, the El Cerrejón strip mine received permission from the Environmental Minister to expand operations by diverting a watercourse and extracting the ore lying in its bed.

Granted without the consent of the Wayúu people who’s land is being impacted, and in open violation of previous court rulings, the Bruno stream is the main tributary of the Ranchería River, the only one in this desert region. Multiple indigenous, Afro-descendant communities depend on it for survival.

With the backing of hundreds of NGOs, in May they published an open letter to global leaders that was signed by 83 Parliamentarians from 30 countries.

Henneberger, who sits on the Bundestag’s Committee on Climate Protection and Energy, was previously spokeswoman for the Green Youth Organization and the anti-coal NGO Ende Gelände. She was so moved that she decided to travel to Colombia to see the situation for herself. (Look for an interview in an upcoming podcast and blog).

Additionally concerned about his nation’s retreat, Irish Social Democrat TD Gary Gannon travelled with Christian Aid Ireland and other parliamentarians from Scotland and Northern Ireland to Colombia this April.

“I’ve seen with my own eyes the devastating environmental impact of the mine and the pain of indigenous communities pushed off their land for its expansion,” he said afterwards.

“There’s a worrying double standard in this shift back to Cerrejón. We’re rightly saying no to Russian coal following the invasion of Ukraine, recognising the impact our trade decisions can have on human rights. But that standard must be applied everywhere, including in Colombia.”

On August 7 the nation’s first leftist-Green coalition government, led by the one-time guerrilla and former Mayor of Bogota, Gustavo Petro and vice president Francia Márquez, the first black woman to ever hold the post, took office. Promising to retool Colombia’s economy away from fossil fuels while accelerating its clean energy transition, we’ll look at how unconventional energy projects nationwide have sadly had the same impacts so far.