Boosting renewable production is essential amid the bid to curtail Europe’s dependency on Russian energy sources. Wind energy in particular is a key plank of Germany’s Energiewende, and there remains untapped potential in onshore and offshore energy production. But how can we boost offshore expansion while preserving delicate marine environments? Leona Schmitt takes a closer look. 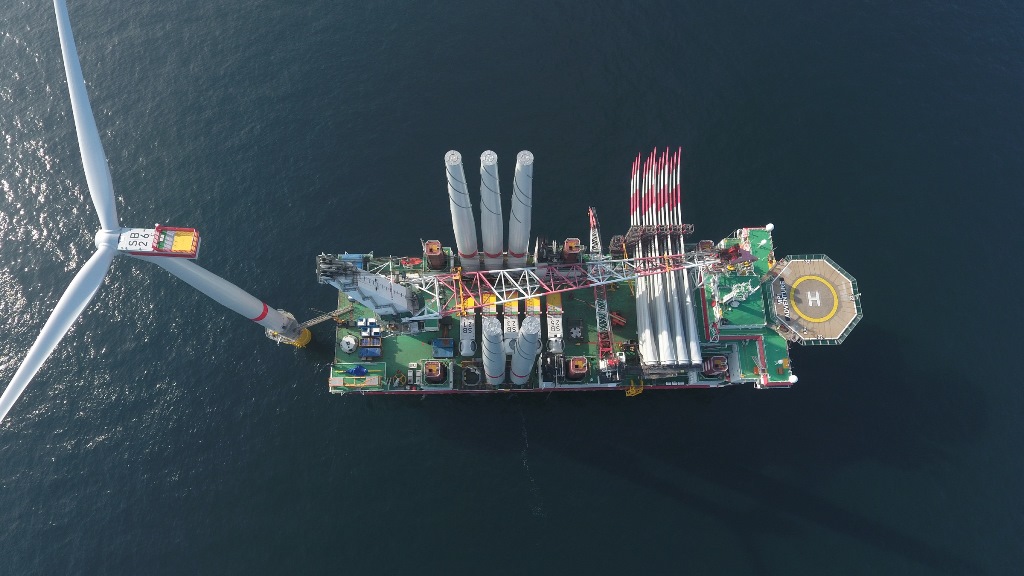 At present, wind and solar energy form the biggest share of renewables in Germany, followed by biomass and hydropower. Wind energy covers an average of 18,6% of Germany’s electricity consumption and is planned to be the driving force behind renewables expansion. Most of the wind energy currently is produced on land: 54.5 GW onshore, compared to only 7.75 GW offshore were produced in 2019. But offshore production is not off the table. Instead, the new German government aims for a capacity of 30 GW by 2030. According to German research institute Fraunhofer IWES, there is even potential to increase the production up to 54 GW offshore.

In 2021, the regulation on Germany’s updated marine spatial planning came into force, concerning the exclusive economic area (EEA) in the North and Baltic Seas. Since the last release in 2009, legal and political circumstances and requirements have changed, emphasising the necessity to rethink spatial planning in the confined space. As the area is being used in different ways, there is mounting competition for the limited space.

By definition, the EEA covers the marine area between costal seas, exactly 12 to 200 nautical miles from the state’s coast. In the EEA, the state has the right to utilize, exploit and benefit from the local resources. If areas overlap, it up to respective states to specify the boundaries of the coastlines. In Germany’s case, having two coastal areas, the EEA located in Baltic Sea in the east bordering more international shores and therefore, space whereas the North Sea’s EEA is more restricted. Additionally, higher wind yields in the North Sea lead to differential production outputs: about 6.7 GW are produced in the North Sea and just 1.1 GW in the Baltic Sea.

Unusually, the planned expansion is to take place along the coastal distance of around 56 to 74 nautical miles, in waters up to 40 meters deep, bringing along a host of technical challenges.

While expanding wind energy is clearly one of the most important planks for the Energiewende, its use in German waters compete against each other.

The EEA usually is an area combining multiple usages: shipping, offshore wind energy, cables (e.g. power and data cables, pipelines), fishery, raw materials extraction, research, defence, and marine nature conservation. The spatial development plan of the North Sea provides offshore wind energy production to be located directly next to areas of environmental protection and to be traversed by canals for shipping. Similarities can be found in the spatial development plan of the Baltic Sea, where areas for wind energy generation overlaps with bird conservation corridors.

While new studies show that occasional offshore turbines can offer safe spaces for some North Sea species, that may not apply for larger offshore expansions. Many risks associated with building, planting, and functioning of these turbine-areas remain unexplored.

Additionally, marine areas of environmental protection are pressured by overlapping usages of research, defence, and areas for extraction of sand and gravel in both, North and Baltic Seas, and shipping and cables in North Sea.

The planning release in 2021 revealed the range of experts’ positions, showing how opinions differed. While representatives of German armed forces and shipping describe the overall spatial planning as successful, environmental NGOs tend to disagree.

Winfried Klein from the organization LAHN called the wind power extension a major intervention in the ecosystem and highlighted its negative impact on the marine habitat even after construction work finished. He questions whether protection areas could be used by sensitive aquatic species, such as protected harbour porpoises.

Kim Deltoff from Naturschutzbund Deutschland (NABU) shares this view, pointing out that more than four-fifths of the whole EEA are reserved for industrial usages, drastically overexploiting natural resources of the North and Baltic Seas. She stated that the expansion of offshore wind farms to achieve climate targets must succeed outside the protected areas to submit an equal response to the biodiversity- and climate crises.

Carla Langsenkamp from World Wide Fund for Nature (WWF) urged that 50 percent of the proposed protection zone should be free of other human use.

Research is underway to create turbines that are more environmentally friendly: Noise in static turbines can be mitigated by using a bubble curtain generated at the seabed to bisect the sound intensity. Scotland’s Hywind is the first wind farm using floating turbines that work with less intense embedding and could lower the environmental risk, if implemented appropriately.

Even then though, conscious spatial planning is a must to avoid cumulative effects wind parks bring. Denmark’s ministry of environment pointed out the importance of close-meshed impact assessments to optimize environmental monitoring and management systems and to provide contingency plans in case of environmental accidents. WWF Norway stated that avoiding construction in resting and reproductive periods reduces the impact of marine life.

Another often overlooked perspective is the fact  that if we fail to transition to renewable energies, climate change will ultimately leads to drastic increases in the already critical biodiversity crisis. It is not up for question whether Germany will need more offshore wind energy to enlarge the share of renewables gradually. But it is essential that environmental-friendly options are adopted to avoid damaging our unique ecosystems.

Leona Schmitt assists the Energy Transition Blog Core Team. She previously worked at the Institute for Ecological Economic Research (IÖW) and completed internships at the Alliance 90/The Greens Berlin section and at Klima Allianz Deutschland. She currently studies a B.Sc. in Ecology and Environmental Planning at the Technical University Berlin.