The war in Ukraine reveals the consequences of Germany’s fossil fuel dependency on Putin’s regime in a brutal way. The international voices to cut these fossil ties are growing by the day. Many oil and gas producing companies – such as BP, Shell and ExxonMobil – have already pulled out of Russia. However, Germany’s largest oil and gas company, Wintershall Dea, is still reluctant to follow these examples. Andy Gheorghiu gives a brief overview about Wintershall’s history and explains how its deep-rooted ties with state-controlled Gazprom – including its Nord Stream projects partnerships and a swap-asset deal that hand-delivered Germany’s largest gas storage to Putin – have also deepened Germany’s dependence on Russia. 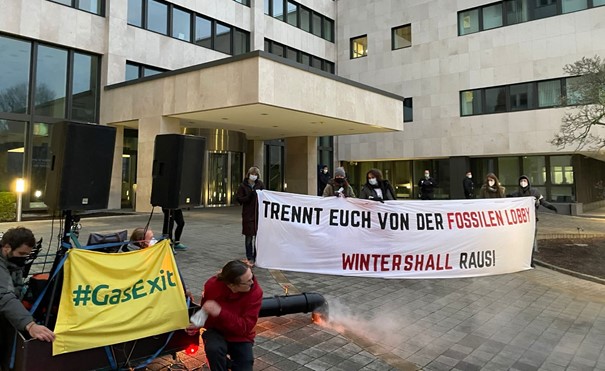 2021 Protest against Wintershall’s fossil gas business modell in front of their headquarters in Kassel, Germany. (Photo by Andrea Aicher, CC)

Who is Wintershall Dea – a brief history

Despite being Europe‘s largest oil and gas producer, not many people know a lot about Wintershall Dea, the company with historical and deepest ties with Gazprom and Putin’s Russia.

Wintershall Dea is a relatively „new“ company, formed in 2019 by a merger between the Wintershall Holding GmbH (a daughter of petrochemical giant BASF) and DEA, the oil and gas compay formerly owned by energy giant RWE. Dea was sold in 2014 to LetterOne, an investment company owned by Russian oligarchs under the leadership of Mihail Fridman – despite concerns raised by the British Secretary of State in relationship to future sanctions against Russia and their impact on LetterOne.

BASF holds 67 per cent of Wintershall DEA, while LetterOne holds 33 per cent. Wintershall Dea’s main headquarters in Germany are in Kassel and Hamburg. 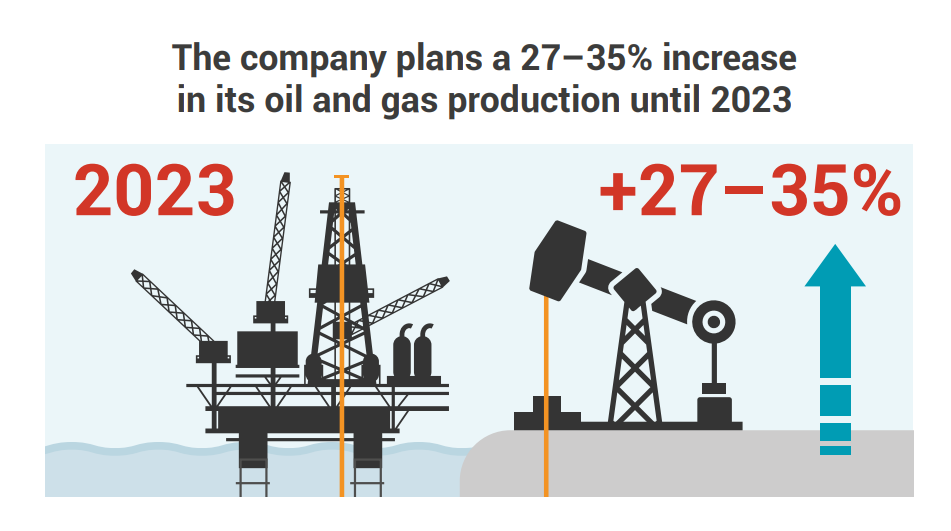 Wintershall on the other hand can look back at 30 years of „groundbreaking partnership“ with Gazprom – as they call it. The first deal for a long-term cooperation between Wintershall’s mother company BASF and Gazprom was signed on September 26, 1990. Since then, this relationship has been steadily deepened – as was Germany’s and Europe’s dependency on Russian oil and gas. We should not forget, that the Russian Federation is the majority shareholder of Gazprom, with 50.23% of the shares. This makes Gazprom an instrument of Russian foreign policy. To this very day, energy sources and raw material (oil and gas) have been Russia’s number-one export.

Wintershall highlights its „successful collaboration“ in Russia and their „longstanding commitment and efficient partnership“ with Gazprom. According to their annual report 2021, approximately 48 per cent of their overall production of oil and gas happened in Russia.

Achimgaz, the 50:50 joint venture (JV) of Wintershall and Gazprom, was founded in 2003 and opened fossil gas production in Western Siberia for the German company. Production from Area 1A of the Achimov formation oft the Urengoyskoye oil and gas field kick-started in 2008, reaching a total of 50 bcm of fossil gas by June 2020.

Unfounded but persistent rumors indicate that the European anti-fracking movement has been co-financed or infiltrated by Russia. Russia – with the help of Western companies – also makes use of this environmental destructive and climate impacting technique to extract oil and gas out of the ground. Shell for example teamed up with Gazprom and started fracking for oil in Siberia back in 2014.

Shell is not the only one. Achimgaz, the JV of Wintershall and Gazprom, was established to get access to deeper deposits and increase productivity via fracking, a technique that was brought into the partnership by Wintershall – as Torsten Murin, managing director of Wintershall Dea Russia also confirmed in a December 2021 interview. 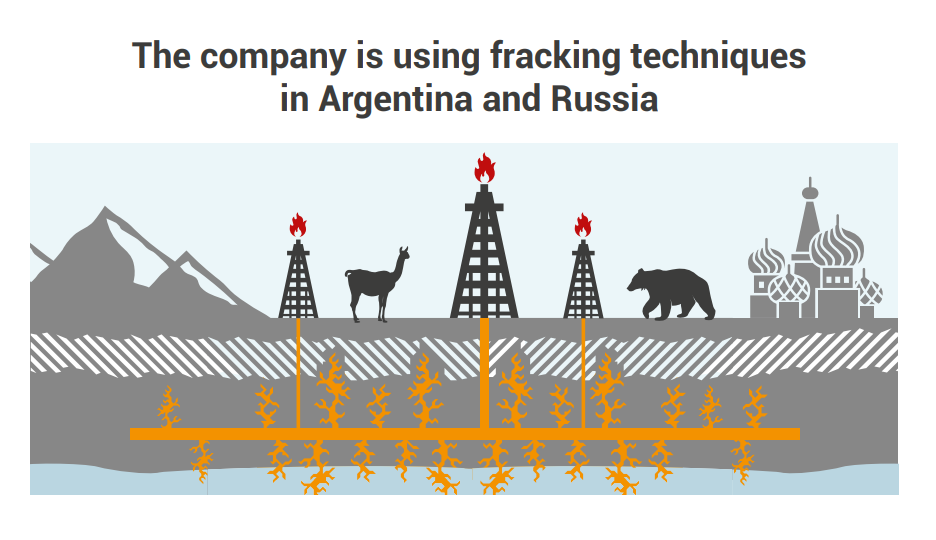 Severneftegazprom, another Gazprom-Wintershall JV (with a 25 percent co-share of Austrian OMV), gives the BASF daughter access to the Yuzhno-Russkoye fossil gas field, the largest in Wintershall Dea’s portfolio in terms of production. The German company owns 35 percent of the commercial success of the field.´ According to Wintershall, the fossil gas extracted from the Yuzhno-Russkoye field is being sold exclusively to Gazprom and is also the “main source of gas supplied by the Nord Stream gas pipeline to Europe.”

Achim Development, called a „milestone“ in the partnership between Gazprom and Wintershall Dea gives Wintershall 25 percent in the JV that aims at drilling over 100 wells while exploiting the Achimov resources at Area 4A/5A in the Urensgoyskoye field.

The price for the 25 percent share in the Achim Development was the handing over of one of Germany’s and Europe’s largest gas storage facility at Rehden. – made possible by the BASF and Gazprom swap asset deal of 2015. The deal was approved after the occupation of the Krim and made Germany and Europe even more dependent from Putin and his war moods.

Gazprom German GmbH, the company who was established to run the Putin’s gas storage business in Germany, has meanwhile been takin into the control of the German regulator Bundesnetzagentur – a move the German state deemed necessary to secure a certain amount of energy security after an attempted sale of the company by Gazprom.

According to Wintershall DEA, the Nord Stream 1 pipeline that connects Russia directly with Germany, gave Europe a decade of secure energy supply. More than 430 bcm of fossil gas flew in the ten years of operation through the pipeline with an annual capacity of 55 bcm per year. Wintershall DEA has a 15.5 percent share in Nord Stream 1. The other shareholders are Russian Gazprom (51 percent), Finno-German Uniper (15.5 percent, successor of E.ON), Dutch Gasunie (9 percent), French Engie (9 percent).

However, in response to sanctions imposed on Russia over the aggression in Ukraine, Russian Deputy Prime Minister Alexander Nova ( also responsible for energy affairs), threatened in March 2022 to cut gas supplies to Europe via Nord Stream 1 – weaponizing again Europe’s and in particular Germany’s gas addiction and its fatal ties to Putin’s regime.

The pipeline – capable of doubling Nord Stream 1’s capacity of 55 bcm – has been built by the Nord Stream 2 AG but never went operational. The initial plan was to set up a joint venture consisting of Germany’s Wintershall and Uniper, France’s Engie, Austria’s OMV, British-Dutch Shell and Russian Gazprom. However, due to the complaint of Poland who raised concerns about its potential to undermine competition in Central and Eastern Europe, Gazprom remained the sole owner of the Nord Stream 2 pipeline – the other five companies functioned as financiers and provided 50 percent of the total costs of approximately €10 bln. Chairman of the board of directors of the Nord Stream 2 consortium was former German chancellor Gerhard Schröder. The German government always backed the project – despite justified criticism from the European Commission and several European states, along with long-standing US sanctions.

Due to increasing pressure by its allies Germany finally suspended the approval process of Nord Stream 2 after the invasion of Ukraine – a step that has apparently forced the consortium to file for bankruptcy.

Claiming compensation and a €1bln. write-off

On the very day of Russia’s invasion of Ukraine, Wintershall Dea’s publicly announced that it expects financial compensation if the Nord Stream 2 pipeline will never be turned on. That was the best the company had to offer in response to Putin’s aggression. 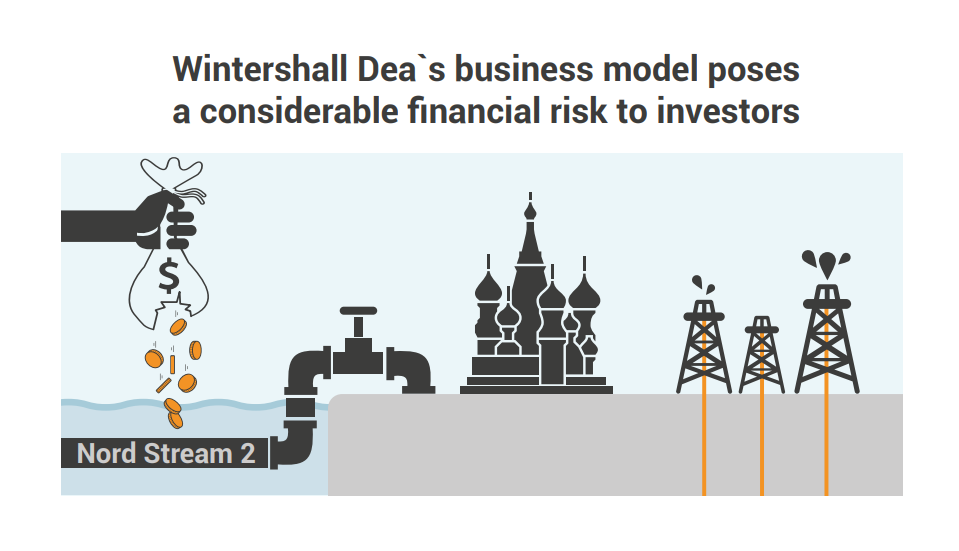 However, on March 2, 2022, Wintershall had to announce that they will write off the financing of Nord Stream 2 of round about €1bln – a move that had an impact on BASF’s first quarter profits too. The intended initial public offering of Wintershall looks now like a very distant dream. It remains open if the company will dare to claim compensation for this. The company also decided to not pursue any additional projects in Russia but also made clear that they have no intentions whatsoever to stop their ongoing business in Siberia. 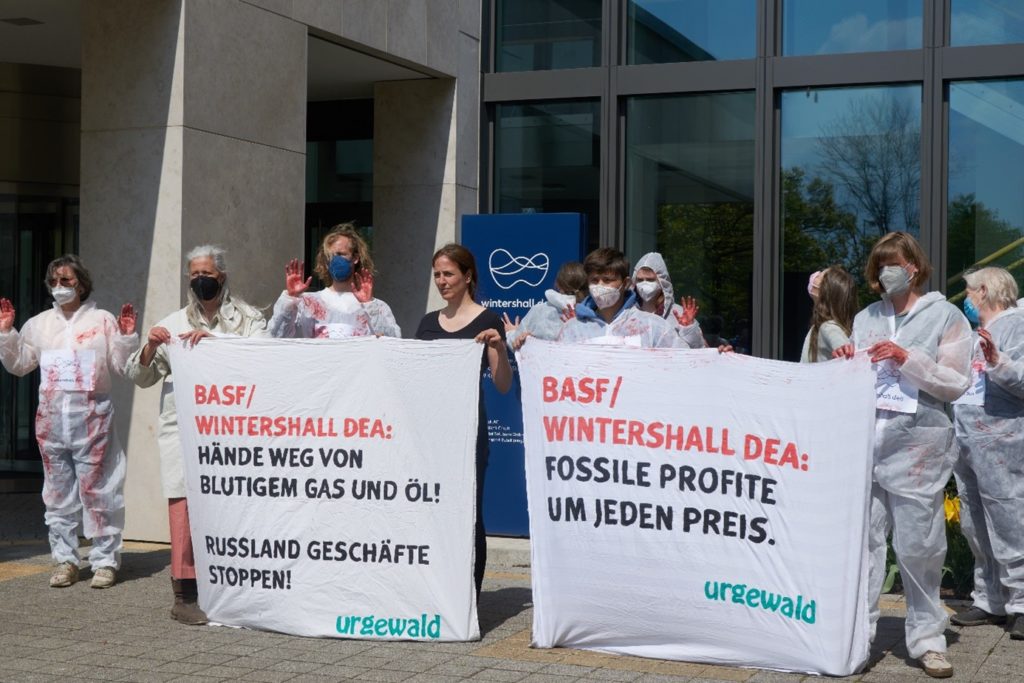 An online event – organized by Urgewald e.V., Deutsche Umwelthilfe, Heinrich-Böll-Stiftung and myself, took a deeper look into Wintershall Dea’s business modell, its fossil ventures in Russia and its relationship with Gazprom. The participants also highlighted the repression faced by climate activists and civil society, as well as the violent effects of the oil and gas industry on the livelihoods of indigenous people in Russia.

The demands – also expressed during the online event- for Germany’s largest oil and gas producer are crystal clear:

Anything less than that would be nothing but a continous active support of Putin’s regime and a financial incentive to feed his war machine!