Since the 2021 military coup, daily electricity blackouts across Myanmar have dented people’s livelihoods and wellbeing. Some rural villagers have taken an independent route to tackling energy insecurity: developing community hydropower systems. If designed properly, these decentralized energy solutions can be affordable, reliable, and even environmentally sustainable. Kyungmee Kim takes a closer look at the trend as fifth part of our Southeast Asia Series. 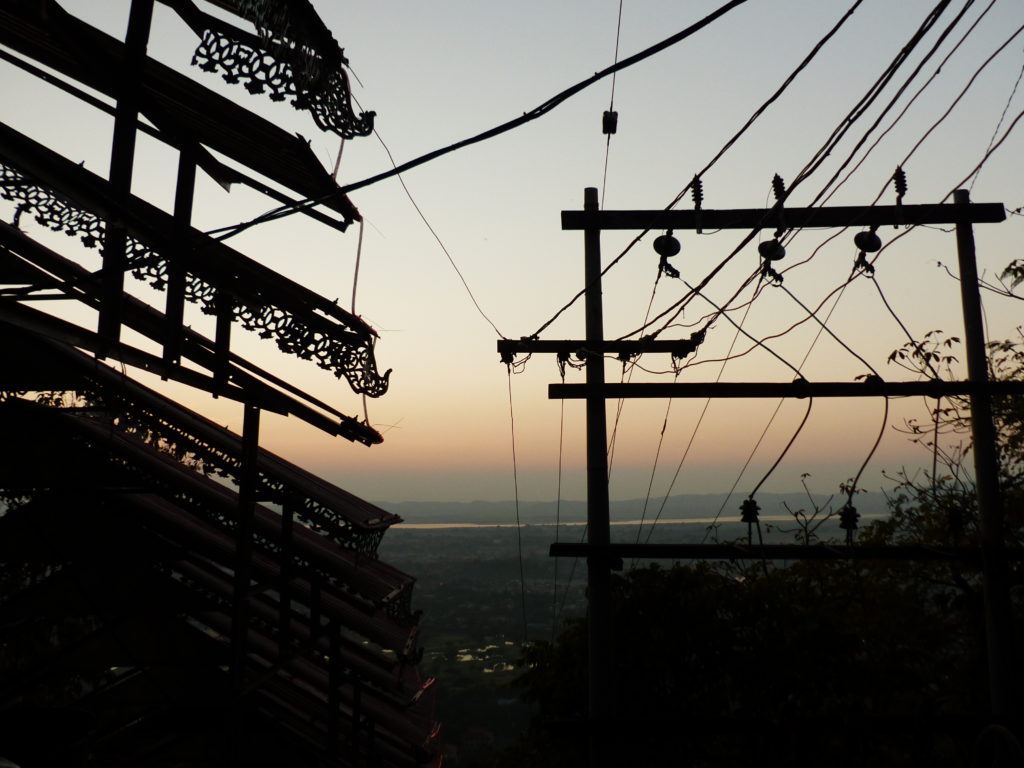 Many communities in myanmar organized their own electricity projects. (Photo by geoff dude, CC BY-NC-ND 2.0)

The Southeast Asian nation Myanmar is struggling to keep the lights on for its 54 million population since its democratically elected government was deposed by the military in February 2021.

Irregular power outages have posed daily ordeals for business owners and residents since 2021, affecting the livelihoods and quality of life. The Ministry of Electricity and Energy claimed that outages are caused by the increase in global gas prices, facility maintenance, and low water levels in hydropower dam reservoirs.

Economists such as U Hein Maung state that the reason for dysfunctional electricity supply is that people stopped paying the electricity bills over the last months, costing the junta up to US$ 57.2 million every month. In efforts to cripple the military regime’s finance, the main anti-coup group called for a boycott on utility payments. Such development points to the risk of undoing progress made towards universal electricity access during 2011-2020.

The country’s existing power generation capacity predominantly comes from hydropower (57%) and fossil gas (38%). The reliance on hydropower entails a potential risk of capacity reduction in the future due to the effect of climate change. Myanmar is one of the most vulnerable countries to climate change expecting decreased precipitation and increased exposure to extreme weather events.

Major progress in electrification has been made through centralized planning. This approach emphasized the expansion of the national grid and its capacity by developing large-scale hydropower dams and gas and coal power plants, which was met with societal resistance in several places.

The policy choice of prioritizing the national grid expansion has consequences such as excluding some social groups, particularly ethnic minorities living in remote regions and rural populations from electricity access. For instance, Yangon’s electrification rate is over 80% while the southern state of Tanintharyi is barely over 10%.

Advocates of progressive energy policy argued in the 2018 report, “it is no longer clear-cut that extending a centralized grid will be more cost-effective than investing in a mixture of renewable generation sources off-grid, with storage, either standalone or as part of micro, mini and meso-grids.”  Experts also assessed micro-hydropower generation systems in remote mountainous regions can provide solutions to supplying electricity to local populations in the country.

In fact, many communities managed to organize their own electricity systems in an absence of the state-led service provision under previous military rule. Efforts towards community-led renewable energy development have been the most advanced in mountainous Shan State where more than hydropower stations were installed by local communities.

Benefits from community’s energy projects have been most felt by poor households that lack funds to purchase their own diesel generators.

A study of the Danu Self-Administered Zone in southern Shan State illustrates the potentials and limitations of community-led energy systems. The area is relatively peaceful compared to other ethnic areas in Shan State.

In the Danu Self-Administered Zone, more than 100 village-run hydropower stations have been installed and supplied electricity for lighting, charging batteries, water pumps and rice mills. Villagers have collected funds to purchase turbines, transmission lines, and converters to make their own small-scale hydropower energy systems.

Most community hydropower systems have a capacity of between 50 and 500 kilowatts (kW). Some of the systems leveraged the natural height of a waterfall to generate power. Villagers gradually upgraded the system by exchanging transmission poles and turbines with larger capacity. Costs associated with these systems ended up much more affordable than tariffs for the government-supplied electricity.

Community-driven energy systems usher in a set of challenges, namely the quality and reliability of the electricity supply.

Community hydropower systems use natural streams with minimal construction to regulate the speed and flow of water. Without regulating the voltage and frequency of generators, the risk of damaging electronic appliances is high.

Installing Electricity Load Controllers (ELCs) is probably the most cost-efficient solution for this problem. However, the cost of imported ELCs is high for local people ranging USD 2,000 – 5,000 per unit. Locally produced ELCs vary in quality and are less reliable.

Another major challenge is the seasonal variability of water flows. Pico- and micro-hydropower use natural streams, which only have enough water for generating power during six to nine months of the year. Only a few can operate all year around. The impact of climate change can lead to changes in precipitation and temperature, which can further influence the future of micro- and pico-hydropower.

Due to such restrictions many households have installed solar PV in their roofs for charging batteries and water pumps. Scaling up the solar power system to the community level has not been discussed much by communities in the Danu region. Yet pooling solar power capacity on the community level can provide more reliable electricity for all.

Community-based organizations can provide crucial financial and technical support for communities lacking resources. The Foundation for Renewable Energy and Environment, for instance, is a group of renewable energy activists promoting renewable energy solutions for and by local communities. Activists identified gaps and challenges in existing energy systems in the Danu region, and then they brokered financial and technical support by using their networks with international development partners and experts.

Sustainable, reliable, and affordable energy is key for human development, and community initiative are at the forefront. Amid political, economic, and humanitarian crises in Myanmar, international actors, both development partners and researchers, have a role to play in supporting the people of Myanmar.

Kyungmee Kim is a Researcher at Stockholm International Peace Research Institute (SIPRI) Climate Change and Risk Programme, where she focuses on climate change and conflict, and environmental peacebuilding. She holds a PhD in Peace and Conflict Research from Uppsala University.