Recent events have thrown the debate as to whether fossil gas remains required to ensure the security of Europe’s energy supplies completely on its head. The threat that gas supplies can be either weaponised or placed under international sanctions at any point has never been clearer and has highlighted the urgent requirement for accelerated low carbon energy capacity deployment for Europe to reduce its reliance upon the fossil fuel. Jonathan Sims, Senior Analyst at the think tank Carbon Tracker Initiative, has the details. 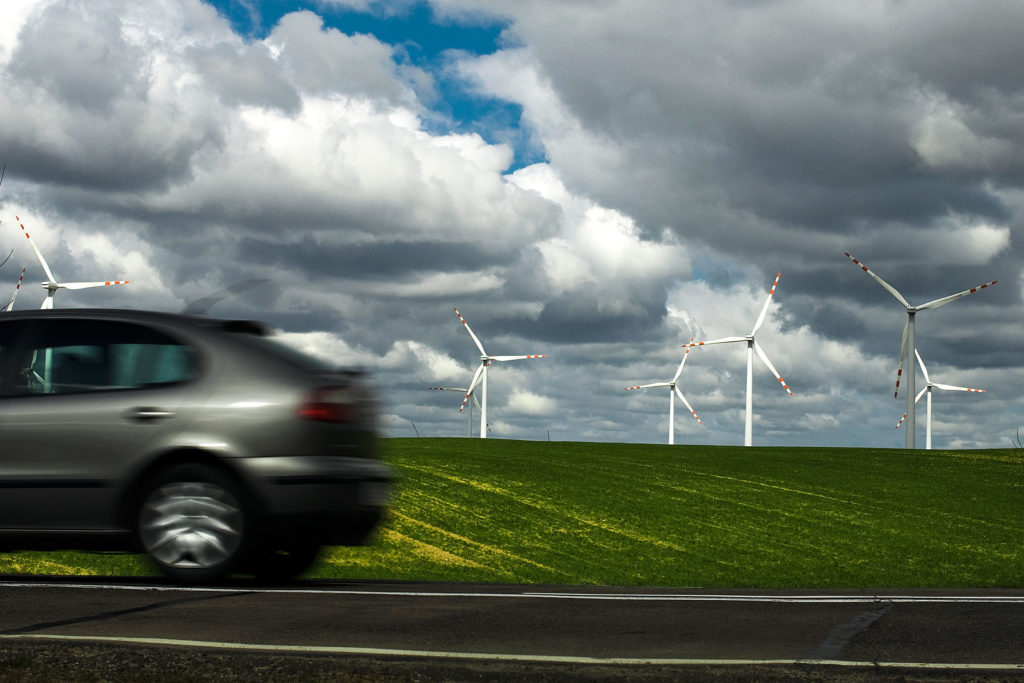 Poland finds itself on the front line of Europe’s exposure to the continuing Russia-Ukraine conflict. The country’s energy minister, Anna Moskwa, acknowledged in early-March the need to “de-Russify” Poland’s energy dependence in response to the crisis, signaling that a possible redirection of plans for how to replace the coal-fired supplies it must begin its transition away from might be under consideration.

A recent report from Carbon Tracker finds that a coal-to-clean transition rather than coal-to-gas is not only possible, but also represents the most economic option for Poland over the long-term, given projected lower operating costs for new renewables capacity compared with those for new gas units.

Such a strategy would also align much better with the EU’s climate neutrality target for 2050, saving other member states from having to cover a significant shortfall in contribution towards this aim from Poland.

Poland’s current strategy for shifting away from coal towards fossil gas-fired power was underlined in its most recent auction of capacity market contracts¹ held in December 2021, in which additional large-scale fossil gas power plant capacity was awarded long-term agreements.

These contracts, which guarantee annual payments at the auction clearing price to the plant owner for 17-year periods, risk locking the Polish taxpayer into funding gas well into the 2030s, despite the likelihood that these projects will steer the country further off course from being able to deliver a sufficient contribution to wider EU climate targets.

Carbon Tracker assessed the economics of five planned large-scale gas-fired units in Poland and found that none would be financially viable without capacity agreements which alone are estimated to cost the Polish taxpayer a combined $4.4 billion.

Alarmingly, if the units analysed did not have access to the additional out-of-market revenues they are due to receive via capacity markets, each one would be at risk of at least $100 million in value destruction over their operational lifetimes (30 years on average for new plants), rising to $200 million for some units, demonstrating the extent to which this mechanism is propping up projects that are, on paper, completely unviable. Without a capacity market in place, the total amount of value at risk of destruction across the five units would be more than $800 million.

Even with the receipt of capacity payments, some of the gas units planned in Poland could still become loss-making over the course of their lifetimes if built. Swings in fuel and carbon markets leave economically vulnerable plants at risk of losing money, while the increased competition that such units will face over time from lower cost renewables should result in reduced usage and consequently revenues.

A strategy of propping up and supporting, with taxpayer funds, investments in polluting energy infrastructure that still may be vulnerable to running into economic difficulties during operational lifetimes appears highly questionable when alternative investment opportunities are continuously arising in the renewable energy sector. These clearly would fit more suitably with a long-term strategy to steer the Polish energy sector towards alignment with EU climate goals, while taxpayer funds could also be used more effectively to stimulate accelerated deployment in this area.

When directly comparing the levelised cost of energy (LCOE) of new renewables to the projected LCOEs of the planned fossil gas plant projects Carbon Tracker analysed, we find that all five projects will be more costly investments than either new onshore wind, offshore wind, or solar farms. Even solar with battery storage technology installed will also be cheaper from 2024 and onshore wind farms with storage from 2025.

The 750 MW Grudziądz fossil gas plant project, which is not planned to start-up until 2027, will enter the market as uncompetitive with even offshore wind technology with storage costs from day one, as falling costs for renewables and batteries over time contrast with rising costs for gas. 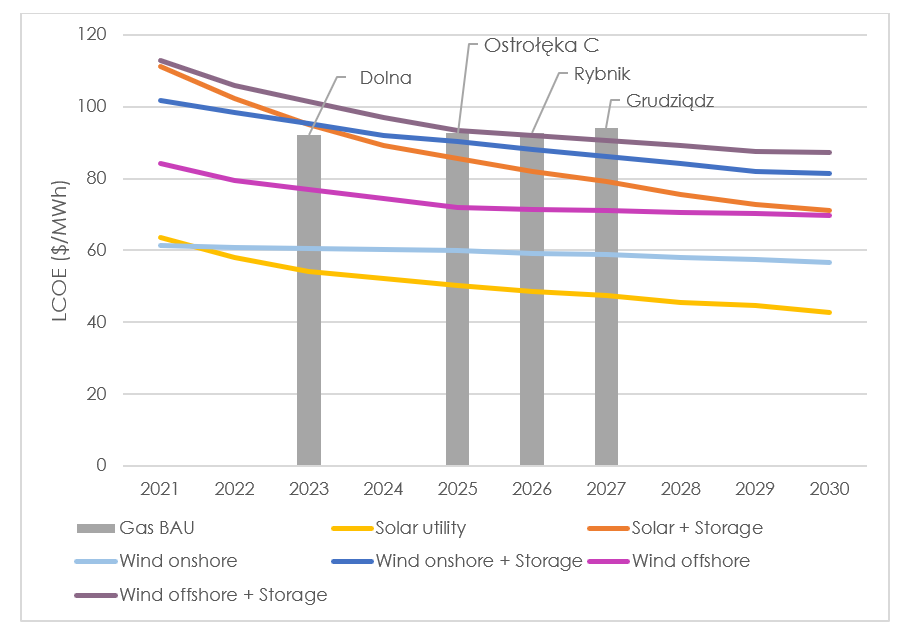 Poland’s vast Baltic Sea coastline particularly offers plentiful opportunities to the country in the offshore wind sector. This technology can deliver load factors of more than 40%, with this projected to reach levels well above 50% by the end of the decade as turbine infrastructure continues to improve, meaning supply services will be comparable to that of new gas-fired plants whilst being available at lower overall cost to the system.

Developers of new large-scale gas plants typically plan for lifetimes of around 30 years. Committing to the burning of fossil fuels for this length of time will make it virtually impossible for Poland to make a sufficient contribution to the EU’s 2050 climate neutrality goal, however.

In fact, Carbon Tracker projects that the average lifetime of these projects will need to be limited to just seven years before operational retirement is reached, demonstrating the extent to which a strategy of building so many new large-scale gas-fired power stations at this stage falls outside of a net zero emissions effort trajectory.

The Polish government could leave itself exposed to the risk of compensation claims from project developers if it allows plants to be built before later forcing their early closure in line with the required net zero emissions pathway. Blocking new large-scale fossil gas developments from proceeding now and instead turning towards a cleaner energy future would alleviate this risk.

Jonathan Sims works in the Power & Utilities Team of Carbon Tracker as a Senior Analyst. Prior, he spent eight years with commodity and energy sector focused business intelligence provider Argus Media. There, he initially worked on power trading analysis before leading the company’s emissions markets coverage.