The race to become the world leader in hydrogen production has begun—and the Middle East is at the front of the pack. Hydrogen—and in particular—green hydrogen, is often portrayed as the “silver bullet” in decarbonization technology—able to decarbonize even the hardest-to-abate sectors. With some of the best renewable energy sources in the world (both solar and wind), many Middle Eastern countries seek to maintain their position as global energy giants by producing and exporting new energy vectors — namely, hydrogen and its derivatives. Yet Joelle Thomas found herself wondering whether these lofty hydrogen goals will be sustainable in a region with one significant resource constraint: water.

Many Middle Eastern countries have expressed their ambitions of becoming leaders in the hydrogen economy.   Saudi Arabia, the world’s largest exporter of oil, has pledged to become the world’s top exporter of hydrogen. Underpinning this pledge comes an announcement of the world’ largest H2 project, powered by 4 GW of solar and wind in Saudi Arabia’s futuristic city of NEOM. The UAE, OPEC’s third-largest oil producer, is also drawing up a hydrogen roadmap and is looking to add the fuel to its clean energy mix by 2050. Morocco, home to the world’ largest solar park, seeks to leverage its geographic proximity to Europe to export hydrogen.

However, green hydrogen production requires more than just sun and wind. A second key input is water—preferably pure water of a high quality,  that generally requires water treatment[1]. In the electrolysis process, a molecule of H2O is placed through an electrolyzer, and an electric shock splits the atom into H2 and O2. With only oxygen as a byproduct, this process is carbon-free when electricity is supplied by renewable sources.

It may seem counterintuitive to plan an energy transition leveraging a natural resource that is far from abundant. The Middle East is the world’s most water scarce-region; home to 6% of the world’s population, it possess only 1% of the world’s clean water sources. To supply water to consumers, industrials and farmers, the majority of the water in the Arab Gulf is desalinated. The good news is that desalination technology has improved, with virtually all new desalination facilities using the reverse-osmosis process, a process that is both more efficient and less carbon intensive than the dominating technology of the last half-century (especially when powered by renewable energy). The bad news is that even new, clean technologies will not solve the Middle East’s water problem, with 60% of the region expected to face high to extreme water stress by 2040, according to the World Bank.

What does this water scarcity mean for hydrogen production? Let’s take, for example, the project in NEOM—which is expected to produce 650 tons of H2 per year. How much water would be required? At 9-24 kg of water to produce 1 kg of hydrogen, the mega-project would require 237,000 cubic meters of water. Compared to today’s desalination production rates – that places the project at 0.10%-0.25% of desalinated water use[2].

This analysis is coherent with conclusions drawn at the global level, where hydrogen is expected to be a minor player among the different end-uses of water. IRENA estimates that world hydrogen consumption in 2050 could reach up to 74 EJ; if this demand were to be met using electrolysis only, than 25 billion cubic meters (bcm) of water would be required. In comparison, water for agricultural use is expected to be 2,800 bcm, industrial processes to take 800 bcm and 470 bcm are to be allocated for municipal uses (see Figure 1)

Figure 1: Water consumption by application (circle size is proportional to water use in each application with agriculture at almost 2,800 bcm). 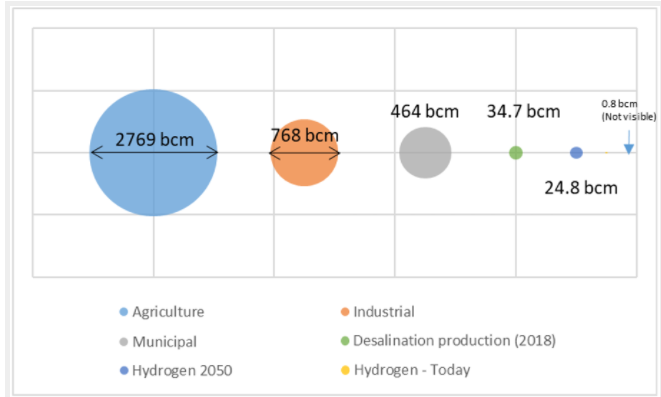 It is also important to note that the water required to produce hydrogen through via fossil gas-based technology is in the same order of magnitude as green hydrogen. Conventional electricity generation using fossil gas is also water-consuming, though an improvement over other fossil-fuel based alternatives. Carbon capture and storage (CCS) is also a very water-intensive technology, as are biomass and hydropower. When comparing to other solutions for the green transition, green hydrogen produced from solar and wind stays in the running, especially since water use in electrolysis is expected to decrease over time, as manufacturing process becomes more efficient and the energy output per unit of installed capacity also improves.

While water use in green hydrogen does not sound the alarm bells, it still must be treated as a risk, with a mitigation strategy put in place and a proactive approach to ensuring a water supply. These steps will create benefits beyond hydrogen production to all sectors that use water.

The advent of green hydrogen in the Middle East may also present an opportunity to consider other green principles, such as circularity and recycling — which are water-saving as well as carbon-saving. For example, practicing circularity in an industrial zone – where output water from one industrial process is used as an input to another, neighboring industry – would save on water, cost, and carbon. And the hydrogen economy itself could be designed around capturing and saving water resources – notably, water produced as discharge from fuel cells.

[1] Low-quality water can lead to faster degradation and shorter lifetime of electroylzers. Water with conductivity of less than 1 μS/cm and total organic carbon of less than 50 μg/L is required. (https://energypost.eu/hydrogen-production-in-2050-how-much-water-will-74ej-need/)