The change of power in Washington has opened up a new window for transatlantic climate cooperation, a stated priority for the Biden administration and the European Commission. The first piece in this series examined the political obstacles on the US side.  What is the outlook on the EU side? 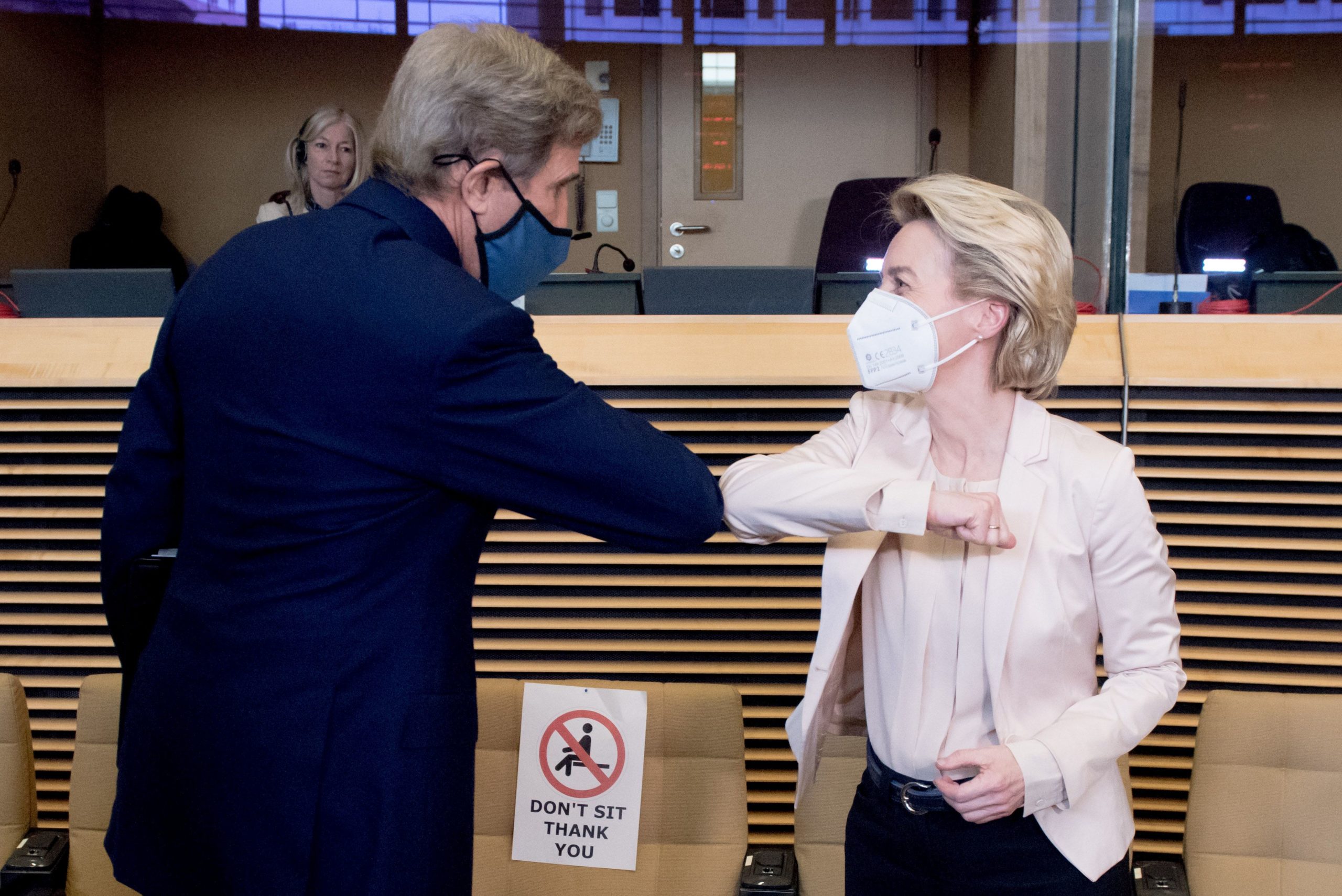 US climate envoy John Kerry visited London, Paris, and Brussels from March 8-10 “to work with European allies to strengthen global climate ambition”, a priority for both the US and EU ahead of President Biden’s Leaders Summit on Climate in April and COP26 later in the year. But different European allies have different climate ambitions and interests with regard to the US. Where can the US expect to find eager partners, and which allies might prove challenging?

Emission reductions are the core of climate protection, and they arguably are themselves foreign policy since the whole world benefits from emission cuts anywhere. On this front, it will be the US delegation that faces tough questions from the Europeans. Under the Paris Agreement’s “ratcheting-up mechanism”, parties are supposed to submit more ambitious emission-cutting plans every five years—the most recent deadline was December 2020. The EU submitted its work on time, putting forward its new 2030 target of reducing emissions by net 55% compared to the 1990 baseline, whereas the UN is still waiting to the US to submit its homework. Kerry understands the importance of the 2030 target: in February he told the Munich Security Conference that “It’s what people will do in the next ten years that matters.”

Digging deeper into the EU’s 2030 target reveals the climate tensions between EU institutions. The Commission has been emphasizing transatlantic climate cooperation since before Biden even took office, calling in December for a green tech alliance between the EU and US. The European Parliament, meanwhile, is often the most ambitious institution: in October it supported a gross 60% emissions reduction by 2030, compared to the Council-backed lower target of 55% that takes into account carbon dioxide removal through land use change or technical solutions.

The national leaders on the Council, on the other hand, are often the most skeptical about whether ambitious climate policies are feasible or politically viable. German Green MEP Michael Bloss told Euractiv, “The important, core issues of the climate law – the climate target for 2030, the climate council, the ban on fossil subsidies, negative emissions, access to justice or the greenhouse gas budget – are contested or unanswered by the Council”.

Of course, the Council itself is far from a unified bloc. Kerry and his team will get different answers from different member-states, just as Commission officials would from New York and Texas. Poland, for instance, has been reluctant to support higher EU climate targets. Finland and Sweden, however, are rich in renewable resources and have net-zero targets of 2035 and 2045 respectively; they will likely be at net-negative emissions before 2050, helping to cancel out residual emissions in laggard member-states.

Moreover, member-states disagree about what counts as climate protection. Belgium, Germany, and Spain are among those phasing-out nuclear power, whereas Poland, Hungary, and the Czech Republic want to build new reactors, perhaps in cooperation with the US. Meanwhile deliveries of US liquified fossil gas are growing in a number of member states, though the issue is caught up in the debates about whether gas is an acceptable “transition-fuel” for coal-reliant countries and what role imports from Russia should play.

EU Split on the CBAM

Kerry’s trip to Europe coincided with a crucial vote on the EU’s forthcoming carbon border adjustment mechanism (CBAM). The EU had proposed the CBAM shortly after the US election, describing it as an opportunity to work together on setting a “global template” for these somewhat controversial trade measures. And a member of the Biden’s trade transition team signaled in early March that there might be deal on CBAMs with the EU “sooner rather than later”. Meanwhile, the EU Parliament confirmed its support for a CBAM on Wednesday—but not before approving an amendment striking any mention of a gradual end to the free allocation of allowances for industry once the CBAM is implemented.

Parliament’s original report, led by CBAM Rapporteur and French Green MEP Yannick Jadot, states “no climate policy can be labelled ambitious unless it abolishes the free allowances hobbling the carbon market”. But after lobbying from industry, the center-right European People’s Party led an effort to remove all language on phasing out free allowances. The successful amendment represents a clear victory for industry groups who are hesitant to rely on “untested” methods to prevent carbon leakage and argue keeping free allowances in place is necessary for business certainty. But keeping both measures is a red flag for climate NGOs and think tanks, who are already concerned CBAMs are taking too much attention away from the need for industry decarbonization. Retaining both free allowances and adopting a CBAM also risks clashes at the WTO since “double protection” for EU industry violates trade rules.

The vote on the nonbinding report is a way for the European Parliament to influence the Commission on the design of the CBAM before the proposal is released in June. So far, both institutions have signaled support for a CBAM mandating importers to purchase allowances for the EU’s ETS from a separate reserve at the same price. But the question of free allowances for industry exposes a rift among lawmakers, making some wonder if the CBAM is worth all the trouble, especially given the administrative challenges and worries about WTO-compatibility.

Given Biden’s history of support for US manufacturers and labor unions, it’s hard to imagine the US looking the other way if it feels that Europe’s flagship external climate policy unfairly disadvantages American producers. Indeed, after his trip Kerry immediately expressed concern about the EU CBAM proposal, telling the Financial Times he thinks it should be “something that’s more of a last resort” and encouraging the EU to wait until after COP26 before moving forward. Biden is already feeling pressure from US unions to keep in place the Trump-era steel tariffs, even on allies, so it’s unclear where the US administration will land on the EU’s CBAM.

While Kerry’s trip marks the return of transatlantic climate cooperation at the highest of government, the new US administration is not starting from scratch but rather

building on the work that took place despite the Trump administration’s obstruction. The EU worked closely with the US Climate Alliance, a bipartisan group of state governors, as well as other state and local groups such as America’s Pledge and We Are Still In [The Paris Agreement]. When it comes to the CBAM, EU policymakers might be able to learn some lessons from California’s scheme, the only operational CBAM covering electricity.

Civil society is stepping up its work too. Sven Harmeling, international climate policy coordinator at Climate Action Network Europe (CAN), told Energy Transitions “Having the US back in international climate diplomacy under President Biden now offers the opportunity for EU and US to drive climate action forward.” Rowan Emslie, director of communications, Europe for Clean Air Task Force, said that his organization, which is new to Europe, has “received an incredibly warm welcome from its European peers… We can learn a lot from each other. The US needs to focus more on implementation and shaping effective policies … while more could be done in the EU to embrace technology optionality and innovation”. Youth groups are looking across the Atlantic as well: Linus Dolder of Fridays for Future Germany says FFF is planning joint action with US groups for Biden’s Climate Summit on April 22nd.

The US and European delegations won’t have agreed about every climate issue last week. The US side will have watched the EU’s CBAM debate closely. The EU side will have wanted some hard numbers on the US’s emission-reducing ambition, expecting something in the range of the EU’s 55% cut. An EU diplomat told Reuters , “If [the US target] doesn’t start with a 5, we don’t consider that good.” But the important thing is that both sides are talking, telling each other they take the climate crisis seriously. That, at least, is progress.