One-fifth of EU emissions are from road transportation, and they’re rising. The EU is trying to help matters by pushing electric vehicles and batteries – but while this would help with decarbonization, it comes with its own risks, as Radostina Primova explains.

Electric Vehicles Only: The EU aims to increase the use of electric vehicles (Photo by Mary and Angus Hogg, CC BY-SA 2.0)

In fact, GHG emissions have constantly risen since 1990 with only a little interruption between 2007 and 2013, which is due to low levels of productivity in Europe, rather than actual change. 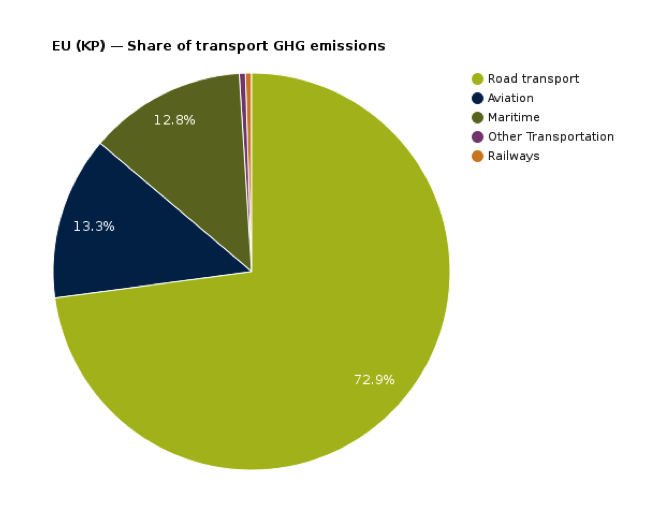 According to national reporting data from 2015, road transport accounted for 72.9 percent of all GHG emission in transport, and to about one fifth of the total CO2 emissions of the EU. With the heat and transport sectors lagging behind and renewables targets set rather low for the transport sector across the EU, the transition is not happening fast enough and not going beyond the power sector.

Challenges for clean road transportation in the EU

One huge challenge is the high oil addiction of the EU transport sector that depends 94 percent on oil to satisfy its energy needs, of which 90 percent is imported. This has huge implications for the energy security of Europa and its external dependance on undemocratic regimes.

The automobile sector in Europe has also undergone a serious public crisis since the Volkswagen car emissions scandal of 2015 that shook the credibility of the European automotive industry and has given the occasion to tighten the transport regulation. In this way, it blew some wind in the sails of the sector’s decarbonisation.

The second big challenge is the slow pace of integration of renewables into the transport sector, since little progress has been made so far due to the huge infrastructure gap. Furthermore, the market uptake of low and zero emission electric vehicles and electric railway transport depends on the right mix of carbon tax policies and proper price incentives for less emission-intensive types of transport, which have been so far insufficient to achieve the EU 2030 transport target.

To accelerate the decarbonisation of the road transport, the European Commission has put forth the Clean Mobility package, which included a number of measures to reinforce low-emission mobility. More precisely, the Commission proposed to enlarge the infrastructure for alternative fuels, to extend the role of coach and bus services in public transportation, to incentivize the procurement of clean vehicles by the public sector and set new emission standards for different types of vehicles.

A proposal for an EU regulation setting binding targets for CO2 emissions for passenger cars and light-commercial vehicles for 2025 and 2030 has been an essential element of the package, since they make up for more than half of the total GHG emission among all means of transportation.

The targets are lower than the proposals of the European Parliament, and still insufficient in terms of their contribution to reaching the overall 2030 emissions reduction target of 30% for the non-ETS sectors. This would require either further measures to reduce GHG emissions in the transport sector, or other non-ETS sectors need to fill in the gap. In addition, the CO2 standards for heavy-duty vehicles, which are still under negotiations, will also determine if we are getting closer to bridging this gap or still deviating from the 2030 and 2050 decarbonisation targets.

Another powerful incentive in the post-2020 regulation is the target for achieving a 35% market share of sales of zero- and low-emission vehicles – ZLEVs – (electric cars or vehicles which emit less than 50g CO2/km) by 2030, and 20% by 2025. The mobility package also foresees the development a real-world CO2 emissions test using a portable device. From 2025 carmakers shall report the lifecycle of CO2 emissions of new cars on the market by using a common methodology.

To incentivize the growth of electric vehicles and boost investments in battery chain value, the EU set up the European Battery Alliance to establish a value chain for the development and production of intelligent batteries in the EU and scale up battery cell manufacturing.

But ensuring sustainability over the whole value chain is crucial if we are serious about decarbonizing the transport sector. This includes also the import of raw materials abroad that should not harm environmental integrity, human rights and social principles in third countries where raw materials are procured from.

EU trade policy will become an important instrument in achieving the EU sustainable mobility targets and exacerbate competition with other leading industries such as China, Brazil and the US on access to raw materials. Therefore, it is essential that all future EU trade agreements and external investments are monitored in terms of their coherence with the sustainable development goals and comply with the high environmental, social, and human rights standards that are part of EU internal legislation. 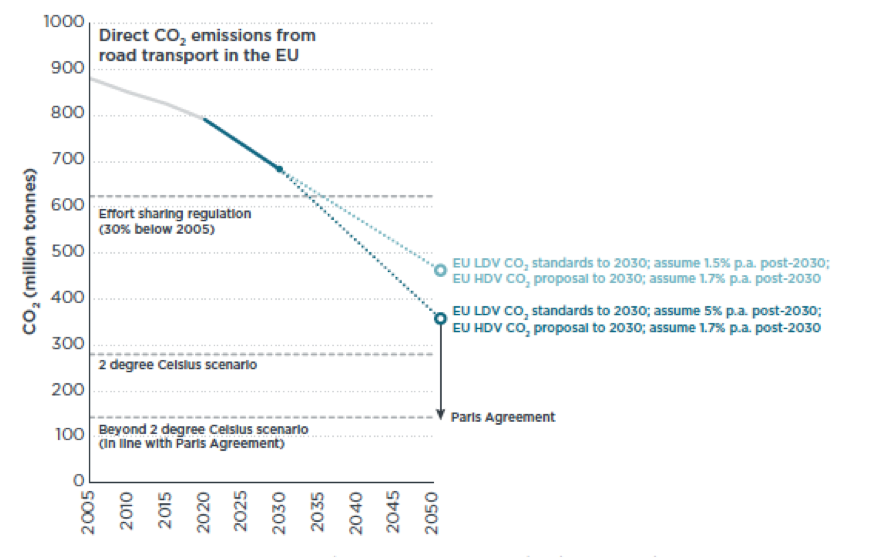 Direct CO2 emissions from the transport sector under different reduction scenarios for the period 2030 to 2050. Results are estimated using the ICCT Roadmap Model. Source ICCT (2019): CO2 emission standards for passenger cars and light-commercial vehicles in the European Union, Figure 5, p.8

Developing an EU internal market for secondary raw materials in tandem with the right incentives for smart charging and flexible storage, as well as bans on diesel and gasoline cars in cities could be also part of the solution. Not least from a strategic point of view, the EU must avoid replacing the fuel dependency with a battery dependency.