The transition to renewable energy will require coordinating generation and consumption. However, a digitalized power system has many ethical challanges, as Stefanie Groll explains.

Ethical aspects do not feature prominently in the debate about the digitization of the power system. “Convenience” and more cost-effective companies are cited as benefits of digitization. However, the goals of the energy transition including social participation and a decentralized power system tend to be lost from view.

The dark sides of digital technologies, such resource extraction, continue to be neglected. The only ethical aspect that is taken into account is privacy. But precisely because the energy transition cannot be realized without digitization, it is high time to lay its ethical foundation.

1. Greening and limiting: efficiency, consistency and sufficiency are the triad of the digital energy transition.

A power system is only ecologically sustainable if it does not overuse natural resources such as soil, water and the atmosphere. But the key technologies of the energy transition – solar, wind and batteries – rely on rare earths and high-tech metals. The largest deposits of these raw materials are typically in Latin America (copper, iron ores, silver, lithium, manganese), in African countries (platinum, bauxite, manganese) and in Asian countries (rare earths).

The hardware of digitization like smartphones and servers is resource-intensive. So-called (digital) future technology requires materials such as lithium and cobalt and leads to skyrocketing worldwide demand. The international rush for these raw materials has already begun to jeopardize fragile ecosystems.

Is metal recycling a solution? Yes and no. It is certainly more environmentally friendly to reclaim metals than to downcycle or dispose of them. But recycling is only the third-best solution within the waste hierarchy after waste avoidance and repair. The recycling potential of many new technologies like smart meters is limited, while other materials and technologies cannot be recycled at all.

Thanks to technological innovation, there will probably be additional possibilities in the future to make the hardware of the digital energy revolution more environmentally friendly. However, counting on as-yet nonexistent techno-fixes to solve the socio-ecological resource and waste problem at some point down the road would be a grave mistake. In addition, attention should be given to how sufficiency can be designed into the (digital) energy transition. Regulatory instruments and market incentives must be provided as soon as possible.

2. Broad participation: the diversity of actors is characteristic of the German energy transition. A broad civic base is a value in itself that should be preserved in the course of digitization.

Energy cooperatives increase the acceptance of renewable energy projects and contribute to regional value creation. Citizens energy initiatives form a bridge between the transition to renewable energy as a technology project and the desire for social participation. Digitization transforms citizens into flexible producers and consumers of energy. Marginal costs can be reduced using automation and algorithms, making action even on a small scale worthwhile.

What kind of political framework will this require? The expansion of broadband must be promoted by the government, ideally in conjunction with the expansion of power grids. Modern communication networks and grids are crucial to a decentralized, citizen-oriented transition to renewable energy. In addition, decentralized consumption communities must be relieved of levies and taxes. In Germany, the use of self-generated electricity must be exempted from the Renewable Energy Sources Act levy. So-called tenant electricity models must be expanded to residential areas and commercial tenants.

Digitization is an opportunity to diversify the energy industry and make it resilient. The current regulatory framework often still favors the established players, however. For example, much of the power data is only available to certain market players, such as grid operators. An open data base could reduce system costs. The downside is that such transparency would make the system more vulnerable, requiring investment in cybersecurity.

3. Clean energy supply, digitization and data privacy must be considered together. The primacy of data economy must apply at all levels.

Smart meters, which track power generation and consumption, are the flagship technology of the digitized power system. Data is transmitted directly to the metering operator, generally the local grid operator. When numerous producers and consumers have smart meters that exchange data automatically, this gives rise to a smart grid. This increases energy efficiency, creates potential savings and is essential for the flexibility necessary for 100 percent renewables.

In Germany, the Digitization Act of August 2016 (based on the EU’s General Data Protection Regulation) provides the legal basis for the gradual installation of smart meters. This law is seen critically by privacy advocates. The fact that the German Federal Office for Information Security (BSI) has developed the highest security standards for smart meters and smart meter gateways has not satisfied critical voices. There is a fundamental risk that the analysis, use, collection, exploitation and marketing of the data will endanger the informational self-determination of consumers. 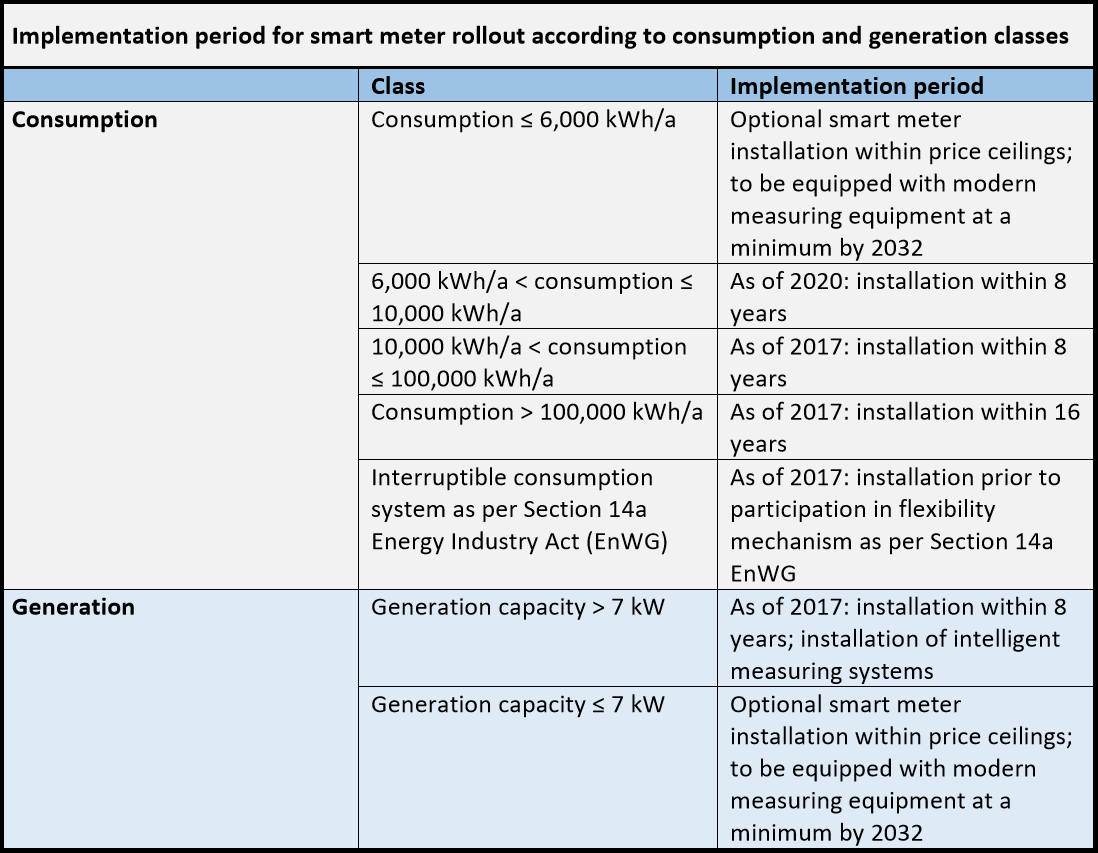 The Greens are calling for energy data to be kept secret, for the informal right of self-determination over one’s own data to be enforced, and for consumers to be informed and educated. Innovative data protection concepts such as privacy by design and privacy by default should be given stronger political support.

Data security is a further work in progress. Events such as the hacking of the German parliament and railway system bear witness to the fact that even critical infrastructure is never completely secure.

The normative requirements for the digitization of the power system are: