And then there were seven – at the end of 2017, Gundremmingen B will close for good as a part of the country’s nuclear phaseout. But before it closes, it contributed to a new world record ramp. Craig Morris explains. 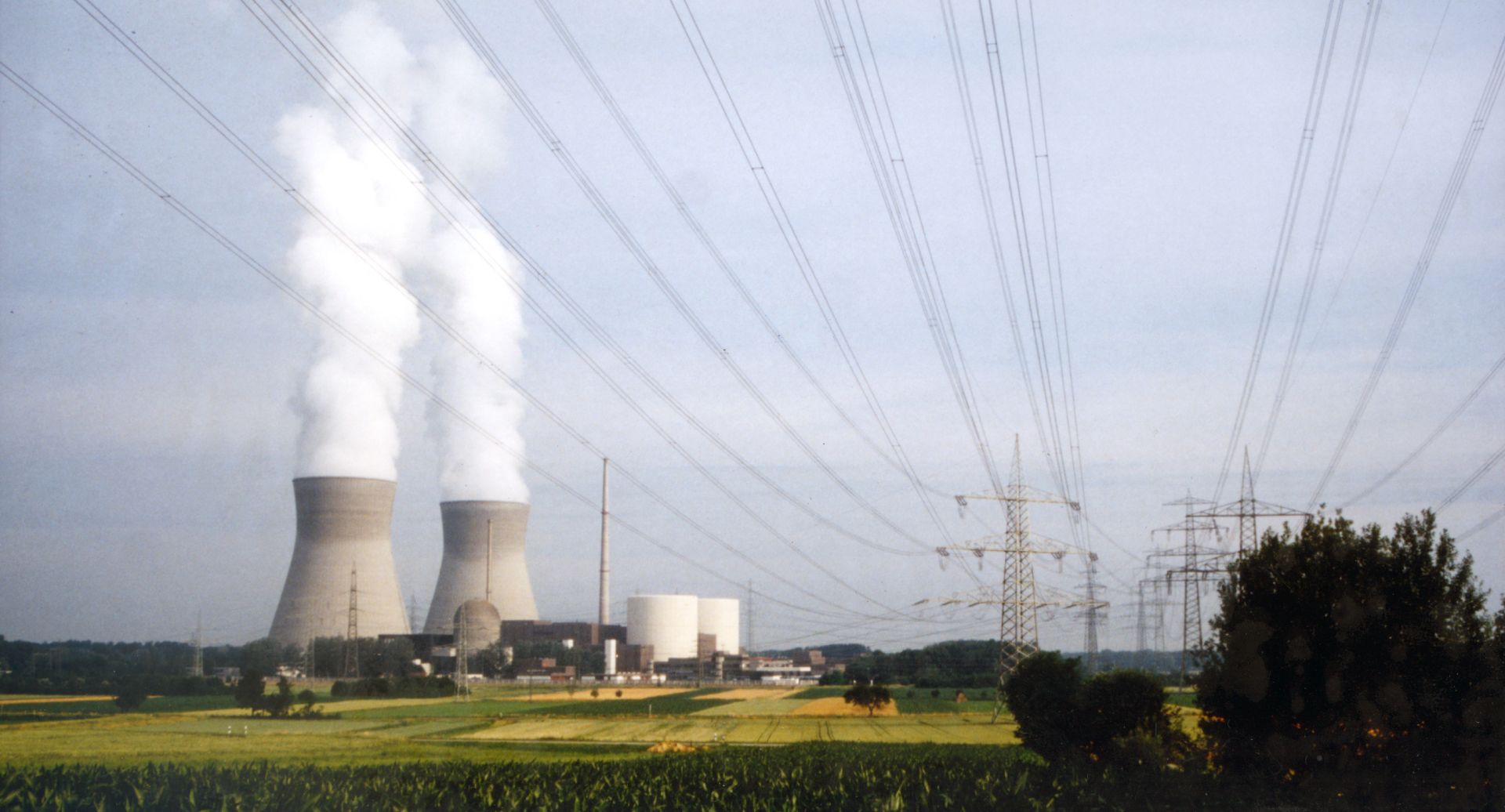 Out of commission: Gundremmingen B was given unprecedented subsidies, but now goes off the grid (Photo by Petr Pavlicek, edited, CC BY-SA 2.0)

France has 58 reactors in 19 locations. At present, Germans has 8 reactors in seven locations. But in a few weeks, Gundremmingen B will go cold, leaving no German nuclear plants with more than one operational reactor. 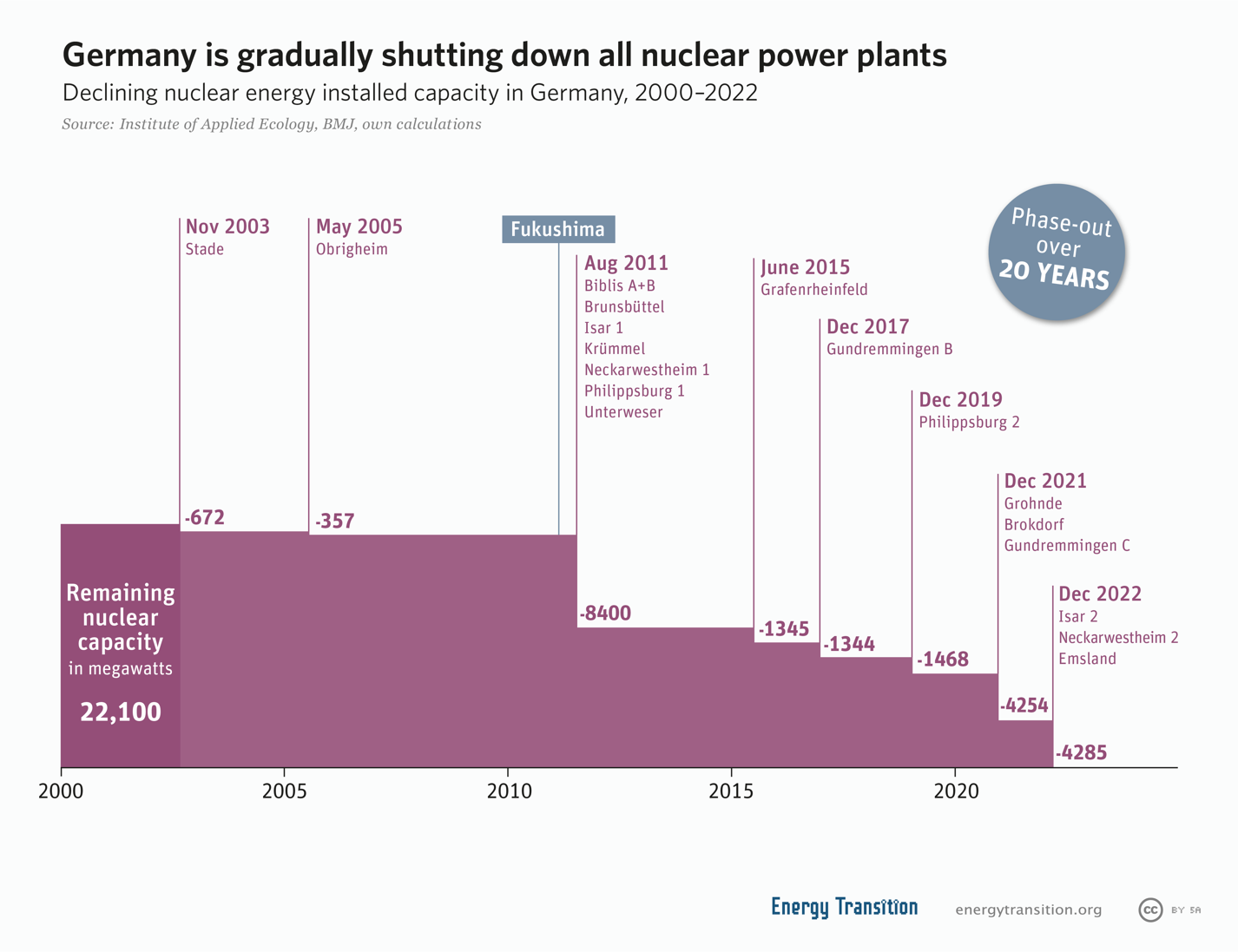 As its name suggests, Gundremmingen B was the second reactor built on that site. Originally proposed in the 1950s for a location near Nuremberg, the site was moved to village of Gundremmingen (map) when Nurembergers expressed concern about the possible impact on drinking water; public awareness of radioactivity came much later, probably in the late 1970s. Locals in and around Gundremmingen also opposed the plant, but were small enough in number to be paid off.

Block A, a small (273 MW) demonstration reactor, was finished in 1966. Construction of blocks B and C began in 1976; both went into operation in 1984. But a year after their construction began, block A flooded in 1977 during an emergency cooling attempt. The reactor was a complete loss. It was also the first major nuclear accident in Germany to be reported to the public, though not the first one to occur.

Why did work on blocks B and C continue after A had failed?

The performance of block A didn’t matter; decision-makers were convinced that nuclear was the future. “It would have made sense,” Hahn and Radkau write in the nuclear history book (in German) from which much of the information here is taken, “after Gundremmingen A, Lingen, and Obrigheim {three demonstration reactors of different designs} were built, to study the operating results, in line with the label ‘demonstration’, to determine what should come next, but no one wanted to wait.” In the 1970s, Germany wanted to build the biggest reactors in the world to show the French and Americans who was boss. Thus, Gundremmingen B and C came in at 1,344 MW (gross), five times the size of block A.

Indeed, reactor A was built at a time when the government was more convinced of nuclear power than even the utilities, so public officials didn’t check permit requirements closely. Hahn and his coauthor Joachim Radkau say the utility RWE built block A “without real interest and mainly just because Bonn {then the capital of West Germany} forced and enticed the firm to.” One governmental official from the Atomic Ministry called the level of subsidies “unprecedented” and warned that the scheme “must not set an example” for future reactors. RWE would pay less than a third of the planned costs, and the government would cover 90% of all cost overruns.

Likewise, a study published in March by Manfred Mertins and peer-reviewed by Lothar Hahn, co-author of the nuclear history book, found (PDF in German) that the emergency cooling system in blocks B and C isn’t one, and no earthquake protection at all is documented. As a result, the facility’s permit isn’t valid.

Based on Mertins’ report, the Environmental Institute of Munich, anti-nuclear campaigners aus-gestrahlt, and Greenpeace called for the plant to close immediately. The protest against nuclear thus continues despite the phaseout of 2011. Indeed, even after 2011, there were attempts to increase the size of reactors B and C, but the Bavarian government eventually decided that there was neither any need for the extra electricity nor a need to raise the public debate over nuclear again.

At present, energy-charts.de shows (double click on Gundremmingen B) that block B is gradually ramping down one last time. But as a final farewell, it contributed to the greatest ramp of any nuclear fleet in history. As I recently wrote, no nuclear fleet worldwide has ever changed output by significantly more than a third. But at the end of October, a massive wind storm drove down conventional power production massively, and Germany’s nuclear fleet reduced its output by nearly half, as shown below.

Nonetheless, only five of the eight reactors ramped significantly, thereby again displaying the behavior I have called “sacrificing some reactors to save others.” Brokdorf ramped less because its fuel rods were damaged during earlier load-following, but – oddly – Gundremmingen C ramped even though it is running on a few flawed fuel rods itself (in German).

Still, lignite plants – the second least flexible after nuclear – dropped from 15 GW down to 2.5 GW, a decrease of some 80%, twice as much as oh-so-flexible nuclear. But you celebrate what you can.

So here’s to Gundremmingen B: a reactor with no valid permit, conceived in an era of a long-forgotten race to build the biggest reactor, but one that never melted down, and as its final gesture it was part of a world-record fleet ramp – even if the event was a bit like watching an old man attempt a high-jump, only to knock the bar down from the bottom with his forehead.