In November 2017, French Minister Nicolas Hulot announced that the government target of increasing renewable energy in the electricity mix would be postponed. But do French citizens approve? Jules Hebert explains new findings that show high support for renewable energy and a positive view of the Energiewende.

France has postponed its energy transition – but for how long? (CC BY-SA 2.0)

Hulot’s announcement came as a surprise. He explained that the target of increasing the quota of renewable energy in the electricity mix “will be difficult to maintain”, and that the French government will propose a clear program to reach their postponed targets within a year.

The plan to reduce the share of nuclear energy in the electricity mix from 75 to 50 % was set out in the energy transition law, which was passed by the previous government in 2015. However, it is still lacking a concrete plan, as well as specific steps toward a new energy model – a bit like launching a boat into the water, setting out a course, but forgetting to hoist the sail and pull up the anchor. France is at a crossroads: the government could now choose to invest a lot of public money in a renewed nuclear model.  Or it could choose to invest massively in renewable energies.

Energy transition as a major opportunity

It is often said that the French people strongly support nuclear energy as a jewel of the French industry. However, a survey commissioned by the French office of the Heinrich Boell Foundation and the French Think tank La Fabrique écologique, carried out by the research institute Harris Interactive, shows that the French people would rather like to pull up the anchor and set sail for a new model based on renewable energy. 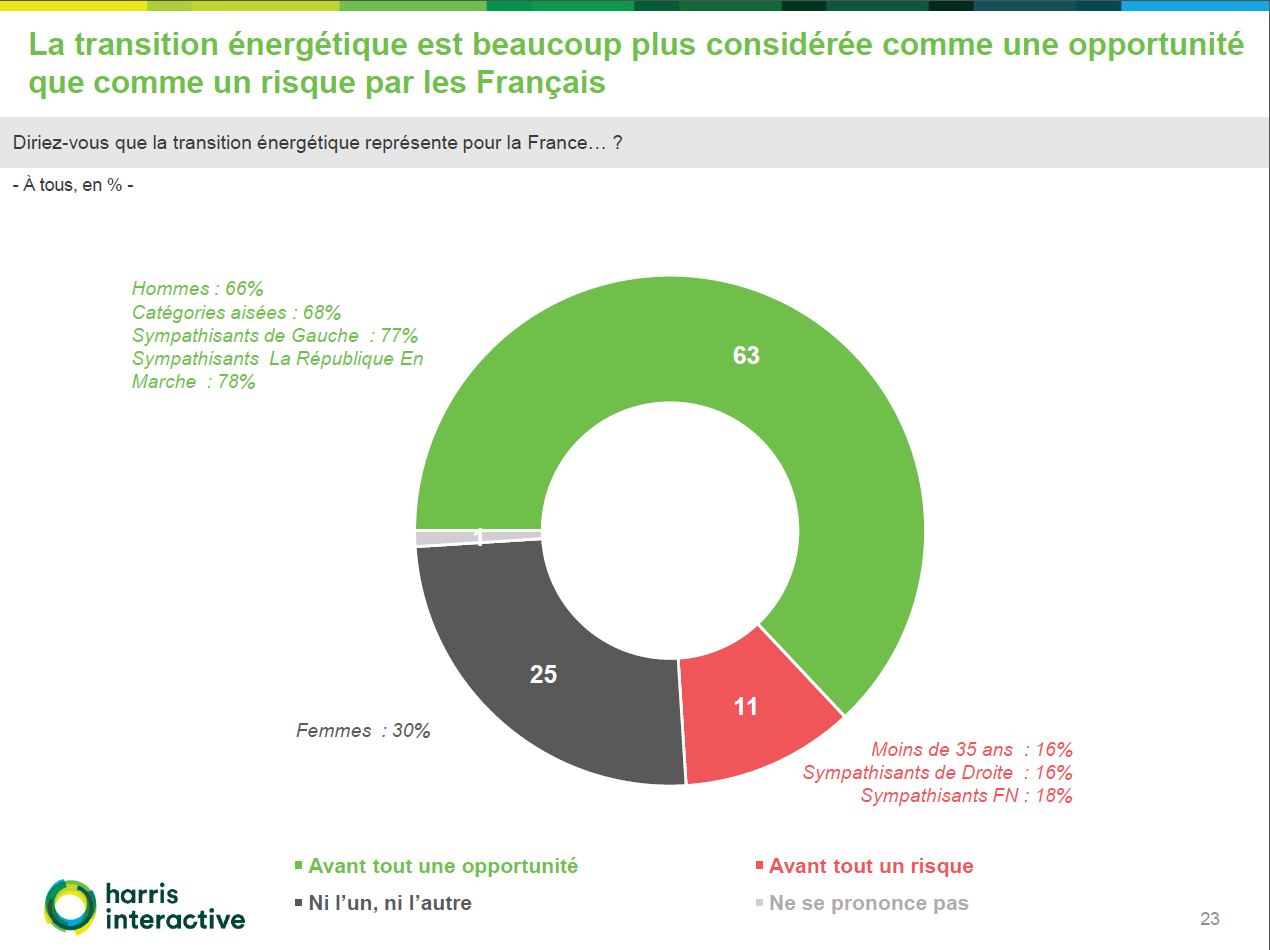 A clear preference for the development of renewable energy

The trend is very clear: 83 % of French people think France should prioritize investments in renewable energy. Only 12% of the interviewees prefer that investments go towards the modernization and life extension of nuclear power plants. 66 % of respondents come out against the construction of new nuclear power plants. It shows that the advertising and constantly repeated arguments that nuclear energy – often described as “clean energy” – is the only adequate solution when it comes to fighting climate change is not having the intended effect on French public opinion. 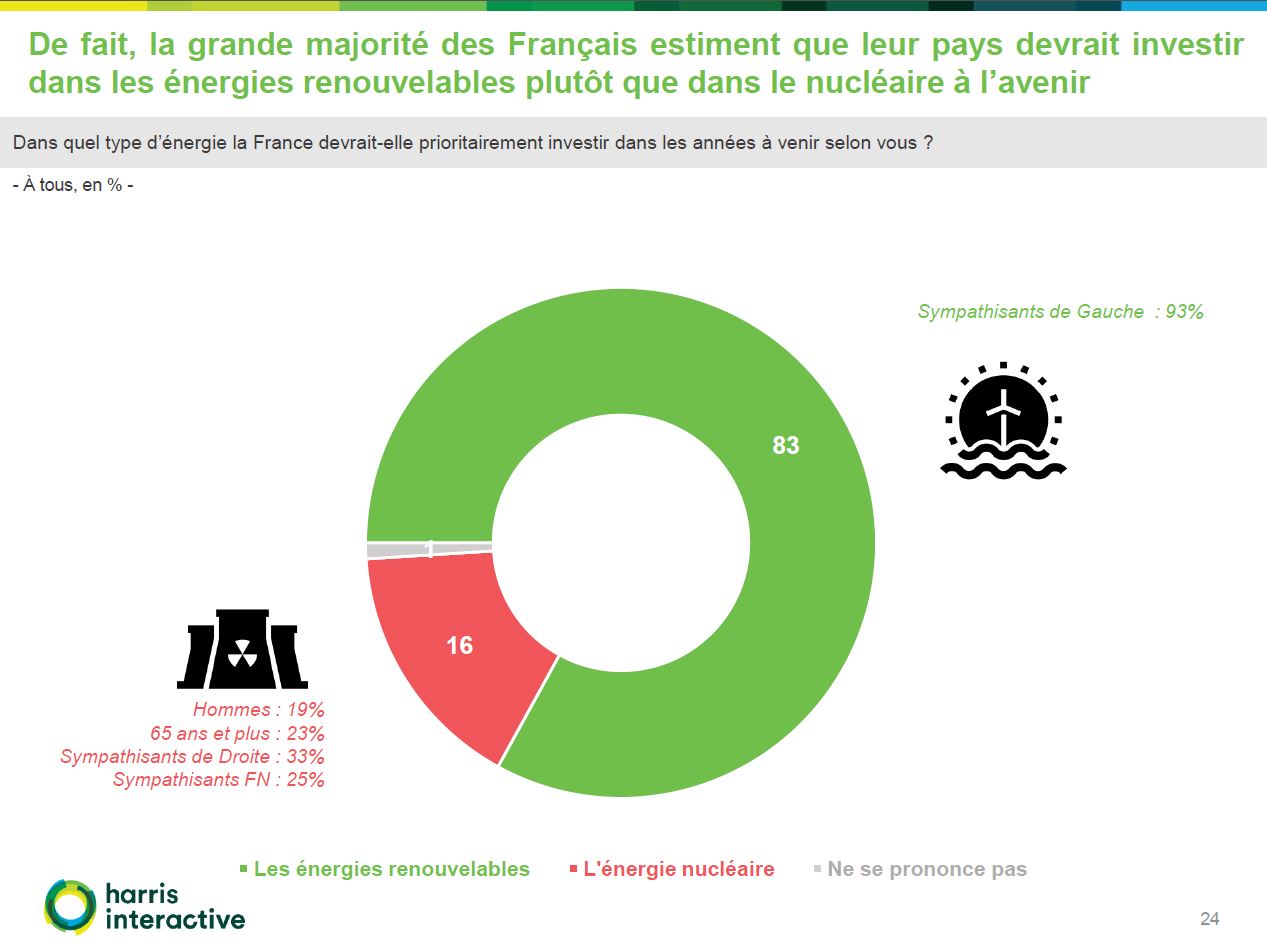 Also surprising is the fact that the actor in which the French people have the most confidence to lead the energy transition is neither the state (trusted by 49% of the interviewees) nor the energy producers and providers like the state owned EDF (trusted by only 46%). Rather, people trust citizen energy cooperatives (trusted by 78%), as well as NGOs and associations (trusted by 66 %).

A positive view of the Energiewende

The winds of change

In November 2017, the French government launched a working group on wind power, with the aim of facilitating the building of wind turbines and making them more profitable to municipalities. Furthermore, the state-owned energy company EDF (whose market share in France is around 85%) seems to have understood that nuclear energy could not be the only path for the future. The company announced a new plan for solar energy on December 11th, only one day before the One Planet Summit organized in Paris (two years after the Paris Agreement). 25 billion Euros will be invested between 2020 and 2035 to develop 30GW of solar plants in France – four times greater than its current capacity.

The next months will show if French President Macron and his Environment Minister Hulot are heading towards a new energy model, based on renewable and decentralized energy production, creating market value and jobs on a local level. This would align with Macron’s ambition to reduce inequalities between rural and urban areas, as well as to encourage small and growing innovative businesses.

Jules Hebert is program coordinator at the Heinrich Böll Foundation office in Paris. He works mainly on energy issues as well as on the transition to a more sustainable economy in France. He holds a Master in Environmental Policy from the Paris School of International Affairs – SciencesPo.