Just as COP23 was getting underway, French minister Nicolas Hulot said France was not abandoning its goal of switching partly from nuclear to renewables, just postponing it. Craig Morris says more time won’t help: nuclear may keep the lights on for now, but the French remain in the dark about nuclear’s conflict with wind & solar. 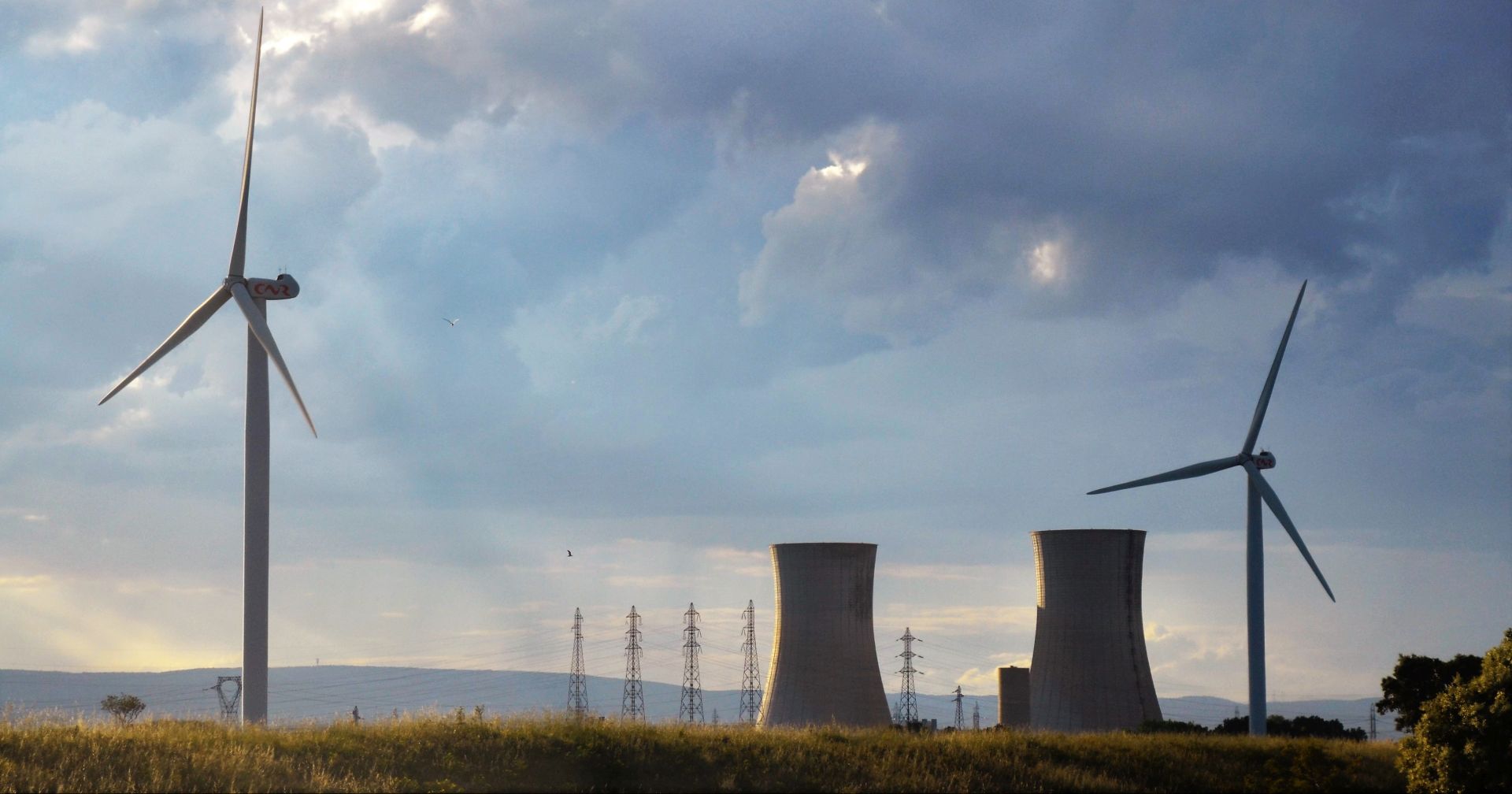 Reactors can’t adapt to the fluctuations of wind and solar – France will have to choose one or the other (Photo by Jeanne Menjoulet, edited, CC BY 2.0)

France has announced (report in French) the abandonment of plans first adopted in 2012 to reduce the share of nuclear from 75% to 50% by 2025. The reason given is that such a fast reduction would not be possible without more fossil energy in the interim.

In 2011, French candidate for the presidency Francois Hollande first proposed the semi-phaseout during the election campaign. The French then elected him to implement it. And then nothing really happened – no nuclear plants have been closed, and renewables hardly grew.

It is possible to add wind and solar much faster. Renewable power grew in Germany from 2010 (the year before Merkel’s nuclear phaseout) to 2016 by nearly 84 TWh, or 14 TWh annually in those six years. Take out the 16 TWh of biomass, and you have the 10 TWh of solar and wind alone France would have needed. France also has far better conditions for both than Germany does, not to mention more sparsely populated land.

So just in terms of the amount of energy, replacing a third of nuclear with wind and solar would theoretically have been possible starting in 2012. But now, France only has seven years left, so the task would be daunting indeed.

But there’s a bigger problem: ramping

A recent post by climate change skeptic Euan Mearns on the infamous duck curve illustrates the problem well. Mearns estimates that a 10% solar share of annual supply would peak at some 28 MW on a sunny summer day in France, with demand at 45 GW. His analysis doesn’t investigate what a peak of 2/3 solar would mean for nuclear, but clearly the fleet would be pushed down to serving a residual load of only 17 GW.

Reducing the nuclear fleet by a third from 63 GW to 42 GW would thus still mean ramping by around half. The French fleet has never demonstrated it can ramp by more than a third. And even then, all other power sources – wind, biomass, hydro, and gas (France will close its last coal plants in 2021, see President Macron’s tweet below) – would need to be curtailed entirely. It would be an expensive mess, not to mention a technical challenge.

Granted, power exports could provide some relief by increasing the residual load. Exports are already rescuing Germany’s nuclear and coal fleet, though the country still has many hours of negative power prices on the spot market. UK-based climate change NGO Sandbag recently published another chart nicely showing how power exports make space for German lignite plants. (The blue area looks a bit like what nuclear would eventually have to ramp like in France.) 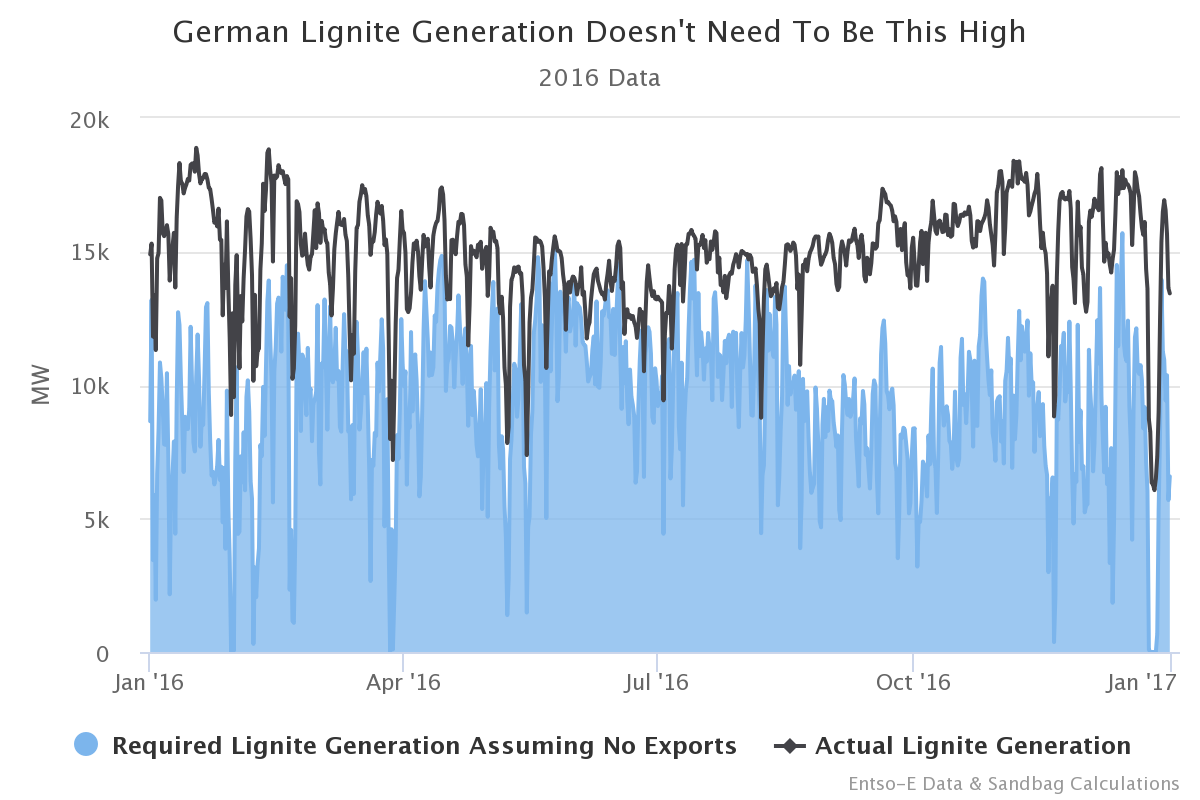 Like Mearns, Sandbag doesn’t focus on what that different residual load (blue) would mean for the plants. German lignite ramps better than nuclear does, but it still cannot ramp like that blue area. In practice, lignite would thus not exactly be pushed down into the blue area shown by Sandbag. Rather, lignite plants would have to switch off for days, such as over weekends, while they wait for more extended higher levels of demand. Lignite would thus decrease much more than Sandbag expects, and gas turbines would fill the gap – which is what the French now believe is needed for their nuclear-to-renewables switch in the interim as well.

In contrast to German lignite plants, nuclear reactors really, really don’t like to switch off for a few days, come back on for a few, etc. But few talk about nuclear inflexibility in France; mainly, carbon is discussed. When France announced the postponement of the semi-phaseout, the country’s grid operator published a set of five scenarios (press release in French), one of which was for Hollande’s plan from 2012. Without ever mentioning ramping, RTE found that gas turbines would partly replace nuclear, thereby increasing carbon emissions.

The French have put so many eggs in the nuclear basket that they are stuck. Spiky wind and solar will break those eggs. A report in Platt’s Nucleonics Week from June 2016 (paywall) speaks of reactor operator EDF’s efforts to make “two-thirds (sic) of its French reactor fleet able to load-follow in 2016.” But that also seems to be the maximum, according to the report. In other words, the French fleet is already as flexible as it can be – and that’s not enough for even 10% wind and 20% solar.

So why did Hollande think a nuclear reduction was possible without fossil fuel?

The short answer is: he had no idea. People often assume that policies are based on some scientific finding or expert knowledge. But in reality, policymakers often adopt policies that sound good, and scientists then scramble to investigate what that might look like.

RTE has been producing scenarios of Hollande’s aim since 2012; it’s hidden a bit in this French PDF from 2012 as the “nouveau mix” scenario for 2030, but with 40 GW of nuclear in 2025. Still, wind would only make up 12% of demand; solar, just 4%. Implicitly suggesting that replacing a third of nuclear just with wind and solar is not even feasible, RTE never investigated that option. Rather, electricity from gas would quadruple. Ramping is not mentioned, but a main finding is that carbon emissions would go up.

I have not found any expert who ever thought France could replace a third of its nuclear power (25% of total supply) with renewables by 2025. French environmental minister Hulot stated himself on announcing the postponement that “lots of people knew it wasn’t reachable” (in French). Hollande had no French study to base his target on in 2011; it had never been investigated. And like so many people, Hollande probably thought the French nuclear fleet is far, far more flexible than it actually is.

Quelle ironie: It wasn’t Merkel’s phaseout of 2011 that was a “panicked reaction to Fukushima,” but Hollande’s. Merkel reverted to Germany’s 2002 phaseout; the country had ten years of experience already, and renewables were growing far faster than anyone had ever imagined possible. She had previously extended reactor lifespans in 2010, so her 2011 decision mainly reversed that extension. She had lots of facts to base her judgement on in 2011. And a national debate about the Systemkonflikt between nuclear and wind & solar had raged for years by then (here’s the nuclear sector reacting to it in a PDF from 2010). The Germans have long known that nuclear has to go for wind and solar to grow.

In contrast, Hollande had nothing in 2011: no scenarios, no French experience with high levels of wind and solar, and no national public discussion about the energy sector. Today, the French discussion remains poorly informed.