As the Trump Administration steps back from climate action, states, cities, and corporations in the US are stepping up.  Ben Paulos take a look at American groups in Bonn, and the city-level action in Austin, Texas as an example of climate leadership. 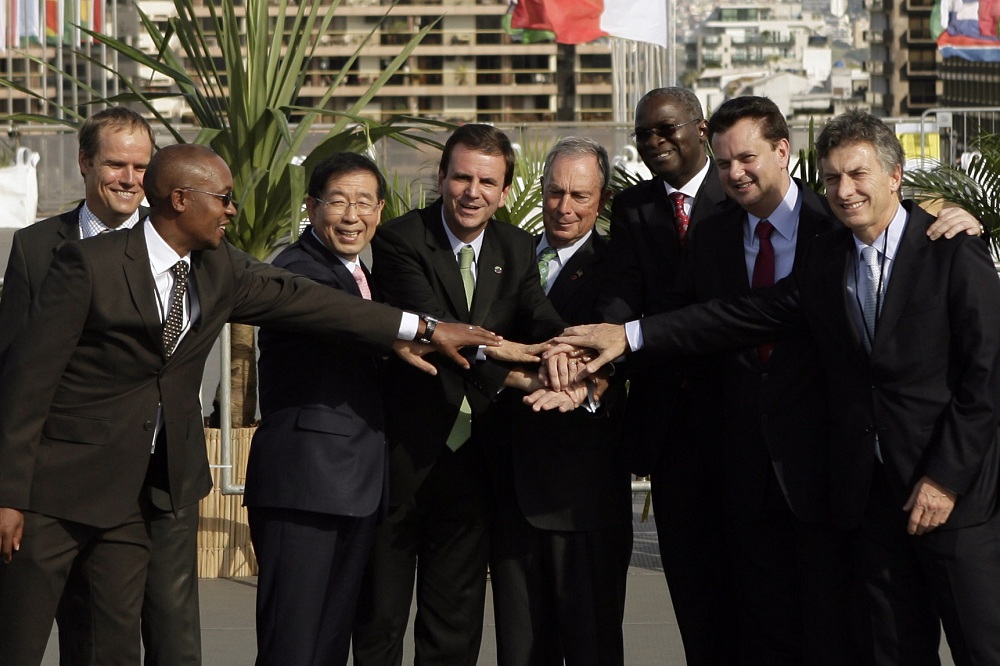 The nations of the world gathered in Bonn, Germany, for the 23rd meeting of the Conference of Parties (COP23), the ongoing global discussion for action on climate change.

While the Trump administration has announced plans to withdraw from the Paris Agreement, US cities, states, and corporations have stepped up their plans to cut carbon emissions.

President Trump announced the US withdrawal from the Paris Agreement in a White House ceremony in June.  With the recent validation by Syria and Nicaragua, the US is now the only country in the world that has refused to participate in the 2015 Paris Agreement.

The Trump Administration’s disdain was evident in Bonn.  The US government did not fund a pavilion at the conference, as all other major economies have. Instead, a pavilion – marked with the hashtag #WeAreStillIn – was funded by Bloomberg’s foundation.

The US State Department brought a small delegation that focused on “The Role of Cleaner and More Efficient Fossil Fuels and Nuclear Power in Climate Mitigation.”  In materials reviewed by the Guardian, the presentations argued that “It is undeniable that fossil fuels will be used for the foreseeable future, and it is in everyone’s interest that they be efficient and clean. This panel will explore how the US will be a leader in cutting carbon emissions through cleaner, more efficient fossil fuels and other energy sources.”

The presentation was met with a barrage of over 200 protestors. Mayor Bloomberg said “Promoting coal at a climate summit is like promoting tobacco at a cancer summit.”

State and local governments in the US have, if anything, become more engaged thanks to the actions of the Trump Administration.

Within days of Trump White House ceremony, more than 1200 US states, tribal nations, cities, companies, and universities declared “We Are Still In,” pledging their support for the objectives of the Paris Agreement.  This number has grown to over 2300 entities, according to America’s Pledge, a new report from the Bloomberg Philanthropies.

In all, these entities represent more than half of the US economy, equal to the third largest economy in the world, ahead of Japan or Germany.

“Across the US, governors, mayors, and business leaders are acting to fill the climate action void created by current federal climate policies. With public support, and effective collaboration strategies, they will drive US climate action forward, from the bottom up.”

“The American government may have pulled out of the Paris Agreement, but the American people are committed to its goals – and there is nothing Washington can do to stop us,” Mr. Bloomberg said at a presentation in Bonn.  “If Washington won’t lead, mayors, governors, CEOs, and civil society will.”

California Governor Jerry Brown echoed Bloomberg’s remarks. “When cities and states combine together, and then join with powerful corporations, that’s how we get stuff done,” he said. “We’re here, we’re in, and we’re not going away.”

Meanwhile, back in Austin

While local action is getting a strong boost in Bonn, it is not a new phenomenon.

Austin, the capital city of Texas, has been working on cutting carbon for over 10 years.

In February of 2007, the City Council under the leadership of Mayor Will Wynn, unanimously adopted a resolution to make Austin “the leading city in the nation in the effort to reduce the negative impacts of global warming.”

“I was — and continue to be — of the opinion that Austin is an indispensable city in this fight,” Wynn said recently.  “Some of the things that give us an edge include the fact that Austin owns our own electric utility, is a significant technology hub focused on innovation, and has a citizenry that recognizes the problem and demands that we do something about it.”

Austin has made solid progress so far.  On the 10th anniversary of the pledge in February, they announced that City operations have cut emissions by 75 percent, largely from buying 100 percent renewable electricity though the municipal utility’s GreenChoice program.

The city’s utility, Austin Energy, now gets 31 percent of its total power from wind and solar, up from 4 percent in 2007.  They have given out 600,000 energy efficiency rebates, weatherized 18,000 low-income homes, and given green building ratings to 13,000 homes and 400 businesses.  As of February, over 6000 customers had gone solar, adding about 46 megawatts of rooftop systems.

The current Mayor, Steve Adler attended the 2015 COP21 meetings in Paris, as well as the C40 Mayors Summit in Mexico City in 2016.

Speaking at a C40 event in New York in September, Mayor Adler reminded listeners of the side meeting in Paris, where mayors signed their own climate accord.  Almost half of carbon reductions under the Paris Agreement, he said, will have to be achieved at the sub-national level.

“Our path was very clearly set in Paris, and nothing that’s happening at the federal or state level can stop a city that is still making its own decisions on transportation and land planning – or on power generation, if your city like Austin has its own power company.”

“There is still a lot of opportunity and control for cities,” he said.

The partisanship around climate change has created conflict at the federal level, but has spurred action at locally, he argued.

Texas, one of the most conservative parts of the US, has paradoxically been antagonistic to climate policies while leading the nation in wind power and rapidly closing coal plants in their fiercely competitive power market.

Austin, the politically liberal capital city is “the blueberry in the middle of the tomato soup,” Adler told the C40 audience. “Regardless of the climate around us, what I say to my community is that the rest of the country could go crazy, but we’ll still be Austin.”

“What they say about climate change is that unfortunately it will be happening to all of us, whether you believe in it or not.”

“We’re used to cultural wars, but this one is getting easier to fight.  As the price of renewable energy comes down the cultural battle that was the false choice – between having a good economy and dealing with sustainability – doesn’t exist the way it used to.”

The proof is in the bottom line, he said.

“The economies of the cities that are progressive on these issues are stronger economies, like Austin is within the state.  The cultural issues become easier as you look at cities whose economies are doing well, not in spite of the positions they take on sustainability but because of them.”

“It’s changing the debate and the discussion, it will continue to change the cultural divide.”

With the city on target to hit their renewable energy goals, Austin recently dialed up their ambition. In August, the City Council boosted the municipal utility’s renewable electricity goal to 65 percent by 2027, up from 55 percent renewables by 2025.