As their electricity systems grow cleaner, both Germany and California are looking for additional ways to cut global warming emissions.  But cleaning up the transportation and heat sectors has proven to be more challenging than cleaning up power plants. Ben Paulos takes a look. 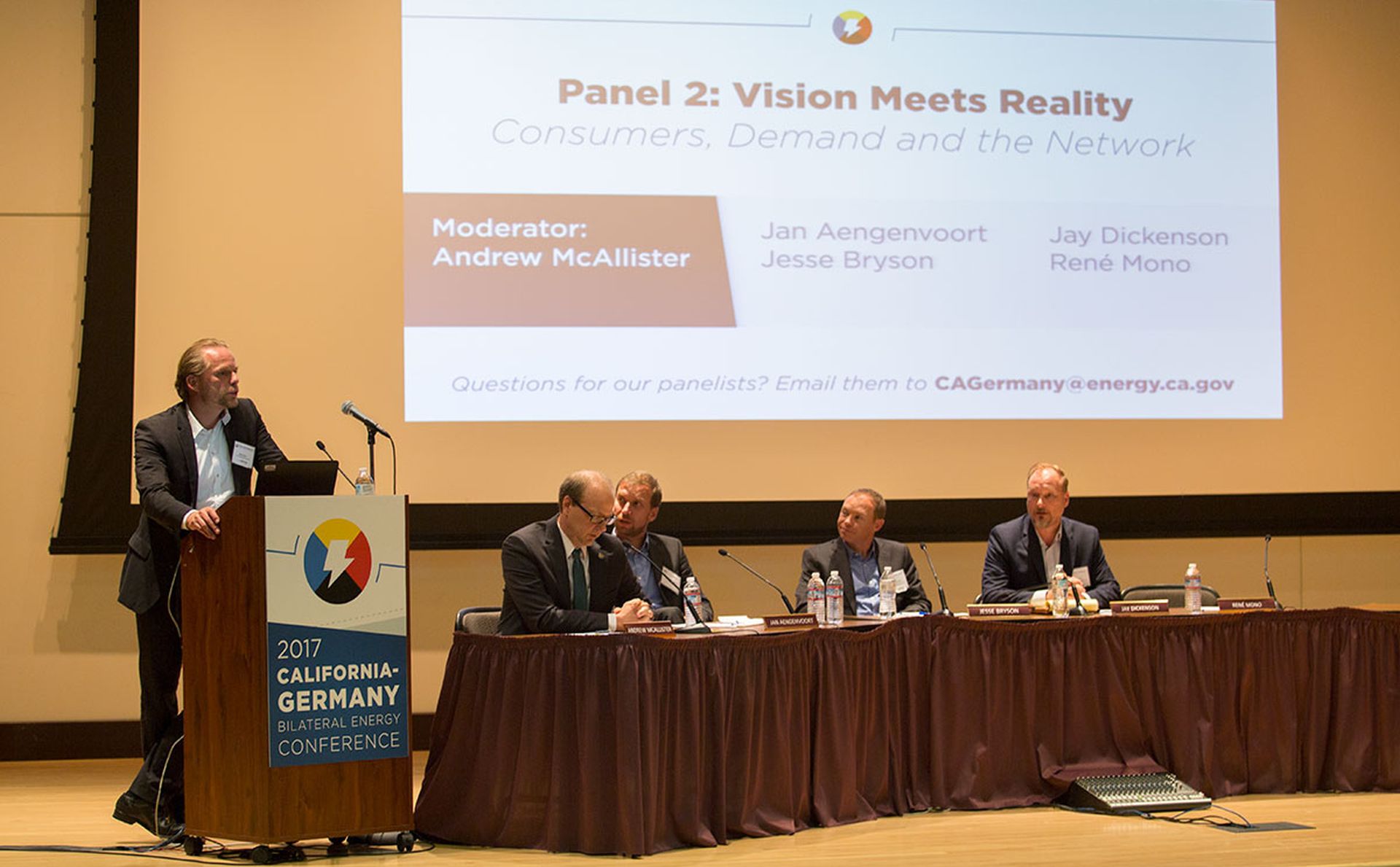 That was a significant takeaway from the California-Germany Bilateral Energy Conference 2017, held October 19-20 in Sacramento.  Sponsored by the California Energy Commission (CEC) and the German Federal Ministry for Economic Affairs and Energy (BMWi), the event drew a few hundred policy makers, industry people, and researchers, including counterparts brought over from Germany.

CEC chair Robert Weisenmiller pointed out that the power sector is now responsible for only 19 percent of California greenhouse gas emissions.  And that number is declining thanks to the ongoing growth of renewables, with legislation aiming at 50 percent by 2030.

Transportation is now the largest source of emissions, accounting for 36 percent of the state total.  Adding emissions from oil drilling and refining makes it closer to half, Weisenmiller added.

In Germany, likewise, power sector emissions are dropping, falling 14 percent between 2007 and 2016 according to data from the German environment ministry.

And like in California, emissions from other sectors have barely budged in Germany.  Emissions from industry are unchanged over the past decade, falling slightly and then rising again.  Transport sector emissions actually rose 8 percent.

Overall emissions fell by 66 MMt in the past decade, with 56 of those MMTs from the power sector.

Both regions are keen to connect progress in renewable electricity to other more intransigent sectors, what Martin Schöpe, head of the International Cooperation on Energy division for the BMWi, called “sector coupling.”

Using money from the cap and trade program, from the VW “dieselgate” settlement, from private companies, and from electric utilities, California has more than 10,000 Level 2 and 1,500 direct current fast charger (DCFC) connectors, according to Janea Scott of the CEC.  The CEC is partnering with Oregon and Washington to build a West coast electric highway and is spending $20 million per year on hydrogen filling stations to serve fuel cell vehicles, with 30 stations built so far.

Ron Nichols, CEO of Southern California Edison, which serves 15 million people in areas outside of LA and San Diego, said “We think 1.5 million cars by 2030 is low, it might need to be double that.”

Nancy Sutley of the Los Angeles Department of Water and Power pointed to the pollution benefits of clean transportation. “LA still has the worst air quality in the nation.  As our grid gets cleaner, the opportunity to make the transportation system cleaner is clear.”

Daniel Witt of Tesla said other car makers, including the main German brands like Volkswagen, BMW, and Mercedes, “have finally come around to the concept that an electrified fleet is in their best interest and the survival of their brands.”

Tesla, based in Fremont, California, and led by visionary Elon Musk, is the leader in luxury EVs, and is poised to be a major player in the mass-market with their new Model 3.

Half of German-made EVs are exported to other regions that have more aggressive EV policies, Witt pointed out.  “Germany needs policies to ensure their car industry maintains a leadership position.”

He welcomed the growing competition from German car makers.  “Diversity of supply is vital to consumer adoption,” he said.  “As more models come on the market there will be more choices for consumers.”

Germany currently has 10,000 EV charging stations and 500 DC fast charging stations, according to Hanno Butsch of the National Organisation for Hydrogen and Fuel Cell Technology (NOW GmbH), along with 77 planned hydrogen filling stations.

Speakers from both regions were bullish on the use of electric vehicle batteries to provide services to the grid, known as vehicle grid integration (VGI).

With VGI, cars can be charged during very sunny or windy periods, soaking up plentiful renewable electricity.  Then they can be discharged while parked, helping power the grid in other periods, follow the ups and downs of demand, and cut charges for customers.

“The electric grid is everywhere,” pointed out Niklas Schirmer of Ubitricity, a company that does EV chargers and smart meters. “The hydrogen grid is not there.  Even the natural gas grid is not everywhere.”

Christoph Jugel, Director of Energy Systems for Deutsche Energie-Agentur (DENA), agreed.  “There will be so many batteries deployed it would be foolish not to use all that capacity.”

“There is no better marriage than electric transportation and the electric grid,” said Steve Berberich, CEO of the California Independent System Operator (CAISO), which manages the California power grid.

Germany has done much more than California to encourage low-carbon heating sources, but is still seeing limited success.

Germany has long promoted high-efficiency district heating systems. Aurubis, a copper manufacturer in Hamburg, is in the process of tying their waste heat output into the city’s district heat network, cutting 160,000 MWh of fuel consumption per year.

But district heating systems, while very efficient, still tend to use fossil fuels.  Using renewable and zero-emission sources for heat poses a number of difficulties.

Increasing the efficiency of buildings is the necessary first step.  But the big energy savings are in retrofits rather than in new construction, and retrofits are harder. Christoph Jugel pointed out that the energy renovation rate of buildings has been about 1 percent of buildings per year in Germany.  DENA is trying to double that rate, such as through “mass customization,” a standardized approach that can cut costs.

Another problem is that many heating technology purchase decisions happen during equipment turnover – a furnace fails in the winter, for example – and an urgent decision is made that tends to result in status quo replacements.  The main low-carbon alternatives, like air source heat pumps or high-efficiency wood pellet stoves, are not easily “dropped in” to replace a gas furnace.

An air-source heat pump works like a refrigerator, using electricity to drive compressors to move heat into or out of a building.  But heat pumps account for only 2 percent of heat now, according to Dietrich Schmidt of the Fraunhofer Institute.  He thinks Germany could get that up to 22 percent by 2030.

The good news about electric heat is that wind power in northern Germany is correlated with heating needs in the winter.  Cold winds off the North Sea drive demand for heating, and supply energy at the same time.

To make progress, panelists agreed that success needs to spread from the power sector to other areas.