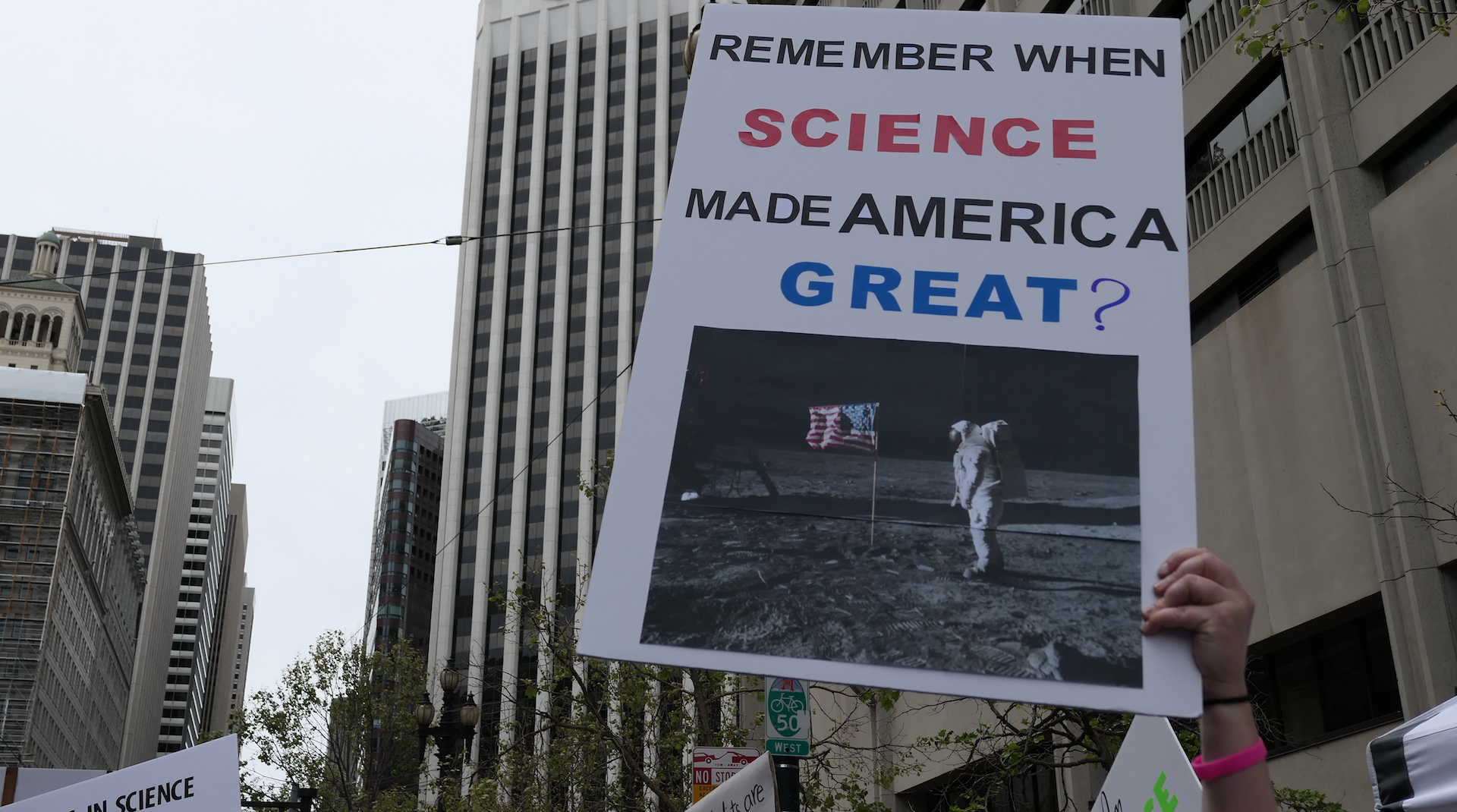 The US hasn’t always been so divided on science – so what happened? (Photo by Steve Rapport, edited, CC BY 2.0)

These days, “tribalism” is frequently cited as the cause of the social rift in America. People tend to believe what their in-crowd believes. Such folks respect authority and view questioning accepted wisdom as a threat.

The opposite of “in-crowd thinking” is science; these folks debate each other’s findings openly. It can get personal, but scientists are supposed to welcome challenges. The two camps thus have different ways of speaking. Scientifically minded people (like me) thrive on intellectual challenges because we love to learn. But whenever I go home to my Trump-voting relatives in Louisiana and Mississippi, I have to change my tone. It becomes more important to signal that I’m one of them. Otherwise, I risk sounding like an elite who thinks he knows best but doesn’t understand the realities of life for them. They will only listen to my opinion on climate change if they accept me as part of their crowd, and I can’t gain that trust with facts, but only by showing them respect.

Living in both worlds – in-crowd and debating – allowed me to come up with my own answer years ago to a question recently tweeted by Allyn West, editor at the Houston Chronicle, in the wake of Hurricane Harvey.

Serious question: What motivates someone to deny the impacts of human-influenced climate change? What do deniers get out of their denial?

No one calls themselves a “denier.” The term is an insult. A small group uses a rather scientific approach to come up with alternative causes (such as solar flares), and latch into data upticks (like polar bear populations possibly rising) to cast doubt on climate science. There will always be (hobby) doubters, and that’s cool – scientists willing to find results that appease the fossil fuel sector, not so much.

Roger Pielke Jr. is an example of a researcher some have called a denier (he rejects the label), but whose critiques of the science are convincing to skeptics. He has also been accused of taking money from the fossil sector, but no evidence has ever been produced.

Most laypeople called “deniers” don’t conduct their own research, however, but remain skeptical about change science because they just aren’t sure, and there is no peer pressure for them to take a leap of faith. In the US, leaps of faith are frequent. People are, say, Catholic or Muslim not because they studied all the religions and found one to be best, but usually because they grew up in a Catholic or Muslim community. Americans are more religious than Europeans, so the in-crowd effect is greater.

Take universities: they should be places where young people learn not to take intellectual inquiries personally. But American students learn to identify with their alma mater in a way that European students don’t. The highest paid public employee in 39 of 50 US states is a university coach. German universities don’t even have such sports teams. In the US, we have artificially created rivalries between universities that need not exist – and don’t in Germany. Americans thus create in-crowds even where science should be in the foreground.

Too many Americans view the scientists who warn us about climate change as being from another “team.” People then feel that scientific elites are criticizing their way of life: eat less meat, drive cars less, walk more, stop wasting energy, recycle, etc. That’s personal; there’s no denying it.

Accepting climate change means changing your lifestyle. The argument is thus ethical and must be made by moral leaders, not scientists. The biggest change will come in the US when churches preach climate change. Conservative Germans have always been on board.

Last fall, I gave a lecture on renewable energy in a church in Holland. The Dutch built massive high-tech levees to protect themselves from the seas. Such solutions are not beyond US engineering prowess by any means. But Americans are not so good at devoting tax money to large infrastructure projects that benefit rich and poor equally, which the Dutch did. The Netherlands is also changing urban planning to live better with the water instead of trying to control it – but that requires strong government, something individualistic America is also not so good at.

Wherever progress is made in sustainability, a sense of common identity is in the foreground. Finland has become a global leader in circular economics because the campaign is understood as a way for the Finns to be number one worldwide. In our history of the Energiewende, we also argue that the Germans support the energy transition because they identify with it as a national goal.

What do “deniers” get out of denial? A sense of identity. Team spirit. So let’s make mitigating climate change a rallying cry to bring the country together. The challenge is thus to heal the rifts in America, overcome the rivalries between teams. The Germans see the Energiewende as their “Man on the Moon Project.” America can do that, too.