In the US, utilities are trying to increase charges for their customers – disproportionately affecting those who use solar. Such changes can be catastrophic for the solar market. But very little utility-sponsored legislation has been successful, and some states are even taking proactive steps to develop community solar. Christian Roselund of PV magazine explains.

The latest NCCETC report on state solar policies finds some new twists as part of an ongoing attempt by utilities to weaken the economics of customer-owned solar, but regulators still mostly aren’t on board.

North Carolina Clean Energy Technology Center (NCCETC) has long been a solar policy research powerhouse, and the company’s 50 States of Solar report has emerged as the definitive report on state-level policies. And while the Q1 2017 version of 50 States reveals many of the same themes as previous reports, it also shows both new attempts by utilities to undermine the economics of distributed solar and pioneering work to value distributed generation. 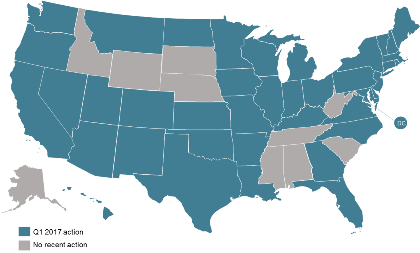 Requested changes to policies or rates that affect solar were literally all over the map. Image: NCCETC

The biggest theme of the Q1 report is more attempts by utilities to increase fixed charges or minimum bills on customers. And while the large majority of these attempted charges were directed at all customers, not just those who own solar, these moves not only weaken the economics of solar ownership but discourage energy efficiency.

The good news is that, as before, utilities aren’t getting what they are asking for. During the quarter cases in which 46 utilities in 23 states and Washington D.C. attempted to increase such charges on all customers by at least 10% were either pending or decided, however regulators on average granted only 16% of the requested increase. No utility got the full amount requested, and two cases were withdrawn.

However, last quarter some some utilities tried new approaches. Texas utility Oncor may have the strangest request, with a bizarre hybrid of a fixed charge based on maximum historical demand, unique to each customer. Along the same lines Massachusetts’ Eversource has requested a hybrid of fixed charge, demand charge and minimum bill.

Both requests are still pending, however EQ Research has noted that demand charges have never been approved on residential customers by regulators. That doesn’t mean that utilities aren’t going to try. “The introduction of new fees that do not fit neatly within the traditional definitions of fixed charges, demand charges, and minimum bills is an area to watch,” notes NCCETC in the report’s executive summary.

Many states are also looking at net metering policies, following the scrapping of net metering in Nevada and Hawaii, and changes to California’s policy. 21 states either considered or took action on net metering during Q1, and NCCETC notes that at least 65 bills pertaining to net metering have been introduced in state legislatures as of mid-April 2017.

And while NCCETC notes that there bills cover a wide range, it says the majority address net metering credit rates and virtual net metering. “This is consistent with overall action observed during Q1 2017, where 15 states took action related to the development of a net metering successor tariff or adjusting credit rates for excess generation,” reads the report’s executive summary.

Net metering may be on its way out, and this is not good news for the solar industry. Even where changes to the policy have been relatively minor, such as in California, market disruption has been significant.

But not every action documented in 50 States was a rearguard attempt by a utility to squash solar, and NCCETC also documents some notable developments towards proactive policy moves. In particular 12 states took action on community solar, with Virginia becoming the 17th state to adopt a statewide community solar policy.

But the most exciting development during Q1 was New York regulators’ order on the Value of Distributed Energy Resources (VDER), a key step in its Reforming the Energy Vision (REV) process. The VDER order represents a possible step forward for the solar industry from net metering, with valuation based on the locational marginal value of energy plus a capacity payment and an environmental value.

It is far from clear what the market implications of this policy will be, but the VDER order has been hailed by solar groups as major progress. It is clear that New York is looking for a future where distributed solar is a major contributor to the grid, without net metering.

Christian Roselund serves as Americas editor at pv magazine, and joined in 2014. Prior to this he covered global solar policy, markets and technology for Solar Server, and has written about renewable energy for CleanTechnica, German Energy Transition, Truthout, The Guardian (UK), and IEEE Spectrum.