The Canadian province of Ontario has recently created a very low carbon electricity system by phasing out coal generation.  Further efforts are being made to reduce natural gas generation and to electrify the heating and transportation sectors to extend the reduction of greenhouse gas emissions.

Solar panels on the roof in Ontario (Photo by Niall Williams)

Ontario is the most populous Canadian province, with a population of 14 million, and a diverse geographic area twice the size of Spain. The majority of the population experiences winters comparable to that of northern European countries and summers comparable to southern European countries. In 2005, the province’s GHG emissions were 211 megatons of CO2 equivalent, and by 2014, they had fallen to 170.

Since 2005, the province has phased out coal generation and replaced it largely with renewables and natural gas generation, as depicted in Figures 1 and 2. This resulted in a GHG reduction of 27.5 MtCO2e, or 80% of emissions from the power sector. The government likes to boast that this is the single largest climate change initiative executed to date in North America. Currently electricity generation creates 4% of the province’s GHG emissions. 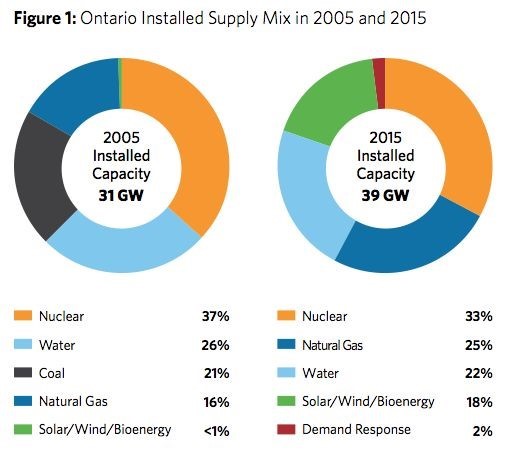 (Copyright © 2015 Independent Electricity System Operator, all rights reserved. This information is subject to the general terms of use set out in the IESO’s website) 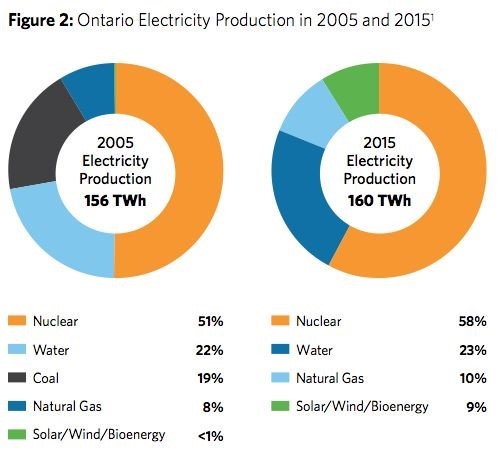 (Copyright © 2015 Independent Electricity System Operator, all rights reserved. This information is subject to the general terms of use set out in the IESO’s website)

It is the government’s objective to maintain a low carbon electricity system, and there is significant political pressure to avoid price increases in the future, since rates have risen 80% between 2010 and 2015. There are many reasons for this, including government mismanagement, paying for legacy nuclear costs, and generous feed in tariffs for renewable generation. Unfortunately, it is often the renewables that get targeted by the media, politicians and some sections of the public. The government does not broadcast detailed arguments to refute this, likely because it would bring further attention to the cost of the government’s politically motivated interference in the system.

Wind and solar are doing quite well in Ontario with capacity having expanded from close to 0GW capacity to around 7GW in 10 years, which currently represents 18% of generating capacity in the province. This is a dramatic increase: Germany’s renewable generation capacity increased by 22% of total capacity in that time. The main barrier to even more renewable success is the climbing cost of electricity, which has become a serious political problem. There are also citizen concerns about the effects of wind turbines on health and property values. But as people become more accustomed to these types of generation, or even become invested in them, they will be more accepting of them.

Given the inflexible nature of nuclear generation, and the fact that a significant portion of the province’s hydro capacity does not have the ability to retain water (for example the bulk of the capacity at Niagara Falls), Ontario’s electricity system has limited ability to cover demand at peak hours without using gas peaker plants. In addition, the province experiences excessive generation during off-peak hours, which increases costs for the ratepayers.

These constraints have forced the province to place significant emphasis on conservation and demand response. Time of use pricing was first implemented for households in 2005, which required the installation of a substantial number of smart meters. Currently most electricity users in the province are subject to time of use pricing. Large industrial consumers have been working in collaboration with the Independent Electricity System Operator (IESO) to reduce peak demand for a number of years, and this system evolved into demand response auctions in December 2015. Currently, the IESO is studying the effectiveness of the demand response measures and developing new ones.

Ontario is highly interconnected with neighboring jurisdictions and tends to export electricity cheaply in off peak hours, with hourly prices often dipping negative. The government is beginning to negotiate deals to use these interconnections to store and import low carbon electricity. In October 2016, the Ontario government signed an agreement with neighboring Quebec to export surplus generation to be stored in pumped hydro facilities, with 60% of the power to be returned as requested. This agreement should help reduce the volume of electricity sold at negative prices. A second agreement, signed at the same time, provides Ontario with the option to purchase hydro power at times of peak demand to displace the operation of gas peaker plants.

The government is beginning to sequentially refurbish the province’s nuclear fleet, as it was determined that this is the most cost effective way of maintaining the low carbon emissions of the power system.  Given the current opposition to the perceived costs and variable nature of solar and wind generation, and the remote locations of untapped hydro-generating potential, the government decided to proceed with refurbishing the reactors.  It has been explicitly stated, however, that the refurbishments will only continue so long as they provide value to the ratepayers, so as the costs of renewables and storage continue to drop, it is likely that some of the reactors will be retired rather than refurbished.

Given the exceptionally small volume of emissions currently produced by electricity generation, the province’s climate change mitigation strategy is strongly focused on the electrification of transportation and heating.  The provincial government offers substantial rebates for the purchase of electric vehicles and has committed to providing free overnight charging for electric vehicles starting in 2017. The government is also supportive of the use of heat pumps for electrified heating.

Ontario is making a large effort to transition to a sustainable energy system, and though it is certainly not perfect, there is essentially no coverage of these efforts locally or internationally.  I am hoping that starting this discussion will promote the exchange of experiences and knowledge that will benefit both Ontario and other places that are working on their transitions.

Niall Williams took an MSc in Environmental and Natural Resource Economics from the University of Copenhagen, and is currently an active observer of Ontario’s energy transition.